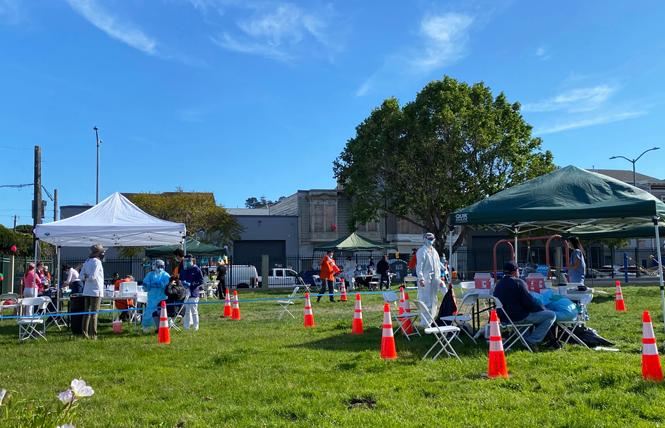 About 6% of people in a section of San Francisco's Mission district have had the new coronavirus, with the vast majority of cases among Latinos, according to results from a community testing project presented at the COVID-19 Conference following the 23rd International AIDS Conference.

The conference was supposed to have been jointly hosted by San Francisco and Oakland last week, but it was switched to a virtual format and the daylong COVID-19 meeting was added in response to the pandemic.

Another recent testing project, which focused on people who participated in the recent Pride is a riot protest, found that only one person out of the nearly 500 tested was positive for the coronavirus.

Since these testing projects were completed, San Francisco has experienced a rise in new COVID-19 cases — reaching 4,640 as of July 11 — as well as a rising proportion of people testing positive. COVID-19 deaths, however, have held steady at 50 since mid-June. As a result of the increase, Mayor London Breed has halted the next phase of the city's reopening.

Testing in the Mission
The Mission testing project, spearheaded by Unidos en Salud — a collaboration between the Latino Task Force for COVID-19, UCSF, and the San Francisco Department of Public Health — offered both coronavirus PCR tests and antibody tests to all residents and workers in a selected census tract. Testing was done at pop-up sites at parks and schools over four days in late April, six weeks after the city's shelter-in-place order went into effect.

"This is one of the first mass testing campaigns to do both PCR and antibody testing," study co-investigator Dr. Carina Marquez of UCSF and Zuckerberg San Francisco General Hospital said at a conference press briefing. "Offering both allowed us to characterize how risk changed over time."

Census tract 022901, a rectangle extending from 23rd Street to Cesar Chavez Street and from South Van Ness Avenue to Harrison Street, has approximately 4,000 residents. It has among the highest proportions of Latino residents in the city, is one of the densest neighborhoods, and about a third of residents have an annual household income below $50,000.

Lead study investigator Dr. Diane Havlir, also of UCSG and SFGH, said that more than 80% of people seeking care for COVID-19 at the hospital, which lies just to the west of the tract, are Latino.

Overall, 2.3% of people in the selected community had positive PCR test results, indicating current active infection. The rates were 1.7% for tract residents and 6.0% for those who worked in the tract.

Latinos had a 20-fold higher likelihood of testing positive than people of other racial and ethnic groups (3.9% versus 0.2%). In fact, 95% of those who tested positive were Latino and none were white, despite the fact that the two groups were equally represented among those tested. About three-quarters of those who tested positive were men, 64% were frontline service workers, and 93% said they could not maintain their income if they stayed at home.

Just over half of people who tested PCR positive had no COVID-19 symptoms at the time of testing, although 13% of them later developed symptoms. This suggests that the true rate of asymptomatic infection is around 40%, according to co-investigator and conference co-chair Dr. Monica Gandhi, also of UCSF. Viral load levels were similarly high in people with or without symptoms, adding to the evidence that asymptomatic people can transmit the virus.

A clinical and community-led team provided comprehensive support for everyone who tested PCR positive, including wellness checks, linkage to primary care, and food delivery to enable them to self-isolate, Marquez told the Bay Area Reporter. DPH conducted contact tracing to identify other people in the community who might have been exposed.

Only one person who tested positive required hospitalization during follow-up. Citywide, although Latinos account for about half of new coronavirus infections, they do not appear to be more likely to develop severe illness. Nine of the 50 people who have died of COVID-19, or 18%, have been Latino, similar to their 15% proportion in the population.

Again, the antibody positivity rate was highest among Latinos. While prior infections were more evenly distributed — with about a third occurring in other racial and ethnic groups — recent infections showed a shift toward Latinos, frontline workers, and those making under $50,000 per year.

Marquez noted that most people with recent infections apparently contracted the virus at work or in their homes. Half of those who tested positive shared a household with another positive person. Genetic testing of viral samples revealed a high level of diversity, suggesting multiple independent introductions of the virus into the community.

"Recent infections were increasingly concentrated among low-income Latinx frontline workers," Marquez said. "The primary driver is underlying inequities. These are people out working to support their families."

Pride protest testing
Another COVID-19 testing study focused on queer and trans people of color and their allies attending the Pride is a riot rally near Mission Dolores Park, one of two large unofficial Pride events held in solidarity with the recent wave of Black Lives Matter protests.

It remains unclear whether racial justice protests in the Bay Area and nationwide, which started after the police killing of George Floyd in Minneapolis on May 25 and have coincided with economic reopenings in several states, have contributed to the recent rise in COVID-19. However, health officials have not seen direct links to clusters of new cases in cities with large protests.

The pop-up test site, coordinated by http://www.renegade.bio in collaboration with the testing company Primary and the phlebotomy and diagnostic sample collection company Bay Area PLS, was conveniently located at the Children's Day School across the street from the park.

Participants who were tested on June 28 were asked to return a week later for a repeat test. People who did not take part in the protest could also get tested on either day. This site offered only PCR tests for active infection, not antibody tests.

Only one person tested positive, on July 5, and this individual had not been tested the previous week.

"With just one positive out of 593 tests performed, the low rate of positive results bears out early research findings that antiracism protests have not been a significant source of COVID transmission," Rouskey said.

The project team surveyed a subset of participants about prior testing before this study and found that a majority had previously been tested, some of them multiple times.

"The fact that more than half of those responding have been tested before suggests that members of this community have been proactive in monitoring their COVID status," Rouskey told the B.A.R. "Interestingly, 44% of participants had never been tested before, suggesting that testing events brought to the community are key to enfranchising all people to participate in keeping each other safe."

Updated, 7/16/20: This article has been updated with additional hospitalization information.