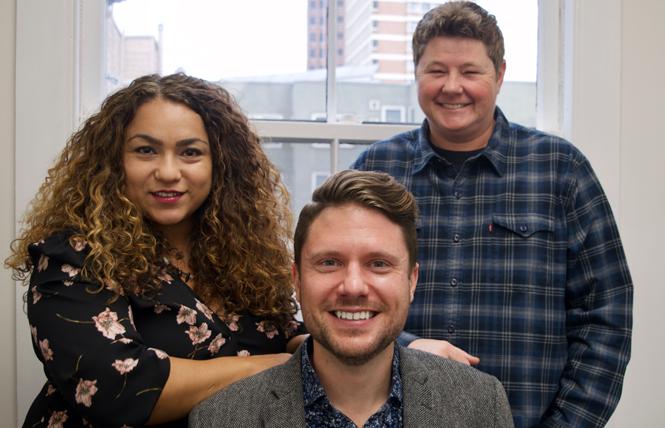 Since they closed their law firm's Oakland office in March due to the novel coronavirus outbreak, co-founders Felicia Medina and Jen Orthwein have been working from home, as have Kevin Love Hubbard, a lawyer recently made a partner in the firm, and several other legal staff. They likely will continue to work remotely until next year since the dangers of working in a shared office space remain unclear.

"We are in no rush to get into an office since we are able to do our work at home," Orthwein told the Bay Area Reporter during a recent video interview.

Nonetheless, the health crisis has presented challenges for the legal profession. California's courts postponed jury trials the last three months and are just now beginning to reschedule them under new guidelines and policies aimed at protecting the health of jury members, court staff, and the litigating parties. The San Francisco Superior Court, for instance, has banned all in-person appearances and is only conducting hearings remotely.

Lawyers' access to their imprisoned clients has also been restricted due to the pandemic, which has led in recent weeks to outbreaks of the virus at several state prisons, including San Quentin in Marin County. The inability to confer with clients face-to-face has presented one of the "biggest barriers" for being able to conduct their jobs, noted Orthwein.

"One of the only ways to communicate with clients in prison was to visit them. We can't do that right now," said Orthwein, who partnered with Medina three years ago to open their firm Medina Orthwein LLP. "We are only being granted access by phone through a court order. And that is only if our client filed a lawsuit and has an upcoming hearing or event in court where we need to communicate."

For the most part the firm has been using written communication not only with its clients but also fellow inmates who may serve as witnesses in their cases.

"We can't communicate with witnesses or clients unless we are writing to them back and forth," explained Orthwein. "We can continue to file complaints, and for our own safety that is what we will do. We have no idea when prison officials will allow people to access folks again."

Just last week the firm filed suit against the California Department of Corrections and Rehabilitation on behalf of C Jay Smith, a Black transgender woman who alleges San Quentin staff retaliated against her after she reported sexual assaults and harassment by someone who had previously targeted and raped her. A former member of the prison's Inmate Advisory Council, Smith claims in her suit that prison staff blamed her for the assaults and falsely accused her of possessing a deadly weapon, which could result in her being given an additional 10-year sentence if she is charged.

Smith was transferred to the California Medical Facility in Vacaville to receive better mental health care after being kept in solitary confinement for months at San Quentin. Her case is just one example of the legal advocacy Medina Orthwein LLP engages in to improve the conditions for transgender and nonbinary people housed in the state's prison system.

The firm has worked closely with other transgender advocates and gay state Senator Scott Wiener (D-San Francisco) in recent years to advance his Senate Bill 132 that would require trans incarcerated individuals in state prisons to be classified and housed with other inmates based on the gender identity of their choice. Thus, female trans inmates, currently housed in male prisons, could choose to be placed in women's prisons.

Hopeful the bill will be passed and signed into law this year, Medina said it can't come soon enough based on the reports the firm is hearing from its clients about the current conditions inside the state's prisons due to COVID-19.

"What we see happening based on our limited conversations with folks inside is there are a lot more dangerous conditions for LGBTQ folks in prison right now. They are locked in cells with people they may not necessarily be compatible with, and that puts everyone in danger. There is no programming. The situation has gotten far worse than it already was, which is very bad for our clients."

In addition to taking cases focused on the treatment of LGBTQ incarcerated individuals, the firm also focuses on employment litigation, particularly cases centered on discrimination based on race, sexual orientation, or gender identity. Its clients have run the gamut from transgender inmates denied gender reassignment surgeries to corporate executives discriminated against due to their race or ethnicity. One recent case helped female AC Transit bus drivers receive accommodations during their pregnancies and for breastfeeding their infants.

"It has to come down to the merits," explained Medina in how the firm decides what cases to take on. "Or it comes down to can our leverage get a result that was meaningful to a particular employee, or victim of police brutality, or a particular incarcerated person."

Many times they are able to resolve their clients' claims out of court.

"A large percentage of our docket is privately settled," noted Orthwein.

Medina Orthwein LLP is a plaintiff-side employment and civil rights law firm. It is one of just a handful of queer-owned law firms in the country. Its founding attorneys have won praise and ruffled feathers over the years.


In 2018, Orthwein was honored by San Francisco Pride with its Heritage of Pride - Pride Freedom Award for their legal work, which included launching the detention project at the Transgender Law Center. That same year the San Francisco Business Times named Medina one of its OUTstanding Voices.

Last year, Orthwein and Medina were criticized by fellow board members of the local LGBTQ bar association for their "pervasive personal attacks" in emails the two had sent to individuals and the full board, leading to as many as seven to resign or opt not to seek re-election to their seats.

Orthwein and Medina are no longer on the board of the Bay Area Lawyers for Individual Freedom. They did not provide comment about the BALIF board issues for this article, though Orthwein did say they remain involved with the organization.

Medina, 41, currently co-chairs the National Center for Lesbian Rights' board, and earned her law degree from the Yale Law School. The queer Chicana attorney lives in Oakland.

In addition to being an attorney, having graduated from Golden Gate University School of Law, Orthwein, 46, earned a Ph.D. in clinical psychology from Palo Alto University and worked as a forensic psychologist at a state prison. A queer trans-identified nonbinary person, they live in Alameda and often provide pro bono forensic assessments for LGBTQ people, particularly trans individuals, who have parole board hearings.

Having gotten to know one another through local bar associations and working on cases together, they decided to open their own law firm following the 2016 election.

Hubbard, 35, also graduated from Yale Law School and first met Medina while working as a summer associate at the firm where she was working. A gay man, he lives in San Francisco and maintains his membership in the Massachusetts Bar, giving Medina Orthwein LLP a bicoastal litigation presence.

"As soon as they started the firm, we had been in discussion on how it would make sense for me to come join them," said Hubbard. "It was really a privilege and a pleasure for me to do that because of the focus of the work the firm does."