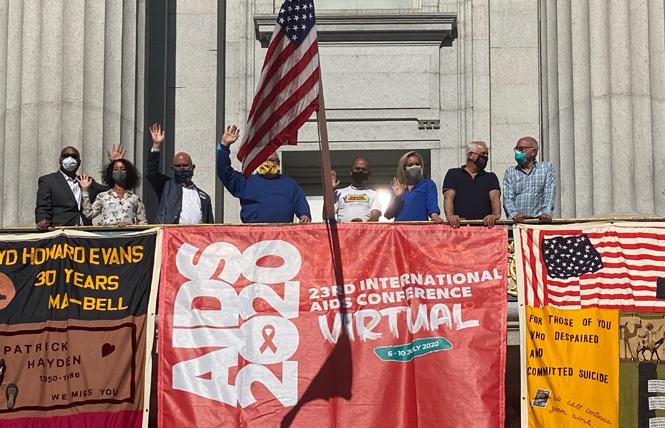 Over the course of the week, virtual attendees heard about a new case of long-term HIV remission (as reported online Tuesday), innovations in PrEP, and the impact of COVID-19 on people with HIV and AIDS worldwide.

"San Francisco has always been central to the story of HIV and AIDS, and it has always been a center of community-based research, prevention, and care," Pelosi said. "We suffered from it, we learned from it, we had the intellectual resources to address it, and we understood that everyone did not share the same love that we had for people with HIV."

In conjunction with the conference opening, panels from the AIDS Memorial Quilt were displayed at San Francisco City Hall and Oakland City Hall, as the Bay Area Reporter noted in an online story Monday. The conference was supposed to have been jointly hosted by the two cities, but was switched to a virtual format due to the COVID-19 crisis.

"As we remember and honor the victims of the AIDS epidemic, let us welcome and utilize the lessons of that experience," Oakland City Council President Rebecca Kaplan, a lesbian who participated in the Oakland quilt unveiling, told the B.A.R. "To successfully respond to the COVID pandemic we need to respect science, make sure prejudice doesn't undermine our response, and take steps to protect and value our entire community."

Quilt co-founder Cleve Jones recalled that the panels were displayed for the first time from the mayor's balcony at San Francisco City Hall in 1987, while Dianne Feinstein occupied Room 200.

"The lessons we learned fighting AIDS are extremely relevant today as we fight COVID-19, and it's painful for me to see so many of the mistakes being repeated," Jones told the B.A.R. "I'm sad that the conference has to be virtual. There's so much to be gained when we are actually gathered together in the same room."

But the virtual conference format also has its advantages too.

"Sometimes there are blessings in disguise," Lee said during her virtual remarks. "We'll probably connect with more people."

Long-term remission
Among the biggest news stories at AIDS 2020 was a report that a Brazilian man who was treated with an intensive experimental regimen has no evidence of remaining HIV after more than 15 months off antiretroviral therapy.

The only two people thought to be cured of HIV — Timothy Ray Brown, also known as the Berlin Patient, and the London Patient, Adam Castillejo — received bone marrow stem cell transplants to treat leukemia or lymphoma from a donor with a rare genetic mutation that makes T cells resistant to the virus. But this procedure is far too dangerous for people whose lives are not at risk from advanced cancer, and it is too expensive to be scaled up to cure the millions of people living with HIV worldwide.

The 35-year-old man was diagnosed with HIV and started standard three-drug antiretroviral treatment in 2012. Three years later he joined a clinical trial to test whether various intensified regimens could help reduce the viral reservoir — the hidden pool of latent HIV in resting T cells.

The research team added two more antiretrovirals, dolutegravir and maraviroc, to his current regimen along with nicotinamide, a form of niacin (vitamin B3) that appears to fight HIV by multiple mechanisms, including boosting immune responses and preventing T cells from going into a resting state.

The man used this intensified regimen for 48 weeks then went back to a standard three-drug combination. After two and a half years with an undetectable viral load, he started a closely monitored treatment interruption in March 2019. His last test, on June 22 of this year, showed that he had maintained viral suppression without treatment for more than 65 weeks.

In addition to undetectable HIV RNA (the form of viral genetic material in the blood measured by standard viral load tests), he also had undetectable HIV DNA (the form that makes up the viral reservoir) in his immune cells. Analysis of HIV DNA in his gut tissue, lymph nodes and other sites is still needed to show whether the virus persists, but this testing was put on hold as COVID-19 disrupted health services in Brazil.

Experts cautioned that this is only a single individual — four other people treated with the same intensified regimen did not achieve long-term remission — and the findings do not suggest that people with HIV should try the experimental medications on their own at this time. Both nicotinamide and its relative niacin can cause side effects.

"It's important not to over-interpret this," Dr. Steven Deeks of UCSF told the B.A.R. "This may not be real and it could actually cause harm. I would not encourage anyone to run out to the local health food store and get this drug." 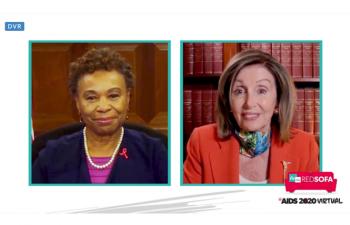 Because the achievements have not been shared equally across countries, the global 90-90-90 targets — 90% of people with HIV knowing their status, 90% of diagnosed individuals being on antiretroviral treatment, and 90% of those having viral suppression — will not be reached in 2020. Currently, those proportions stand at 81%, 82%, and 88%, respectively.

The report notes that more than 60% of new cases occurred among key populations and their sex partners, including gay and bisexual men, sex workers, people who inject drugs, and people in prison.

The COVID-19 pandemic threatens to halt or reverse this progress. Shelter-in-place orders have limited access to PrEP and HIV treatment, while border closures have interfered with the production and distribution of HIV medications. A recent analysis found that disruptions in HIV treatment could lead to more than half a million additional AIDS-related deaths over the next year, as well as a rise in new infections.

"We cannot drop the ball on HIV," said UNAIDS Executive Director Winnie Byanyima. "We must double down and increase our efforts to hold governments and policy makers to account. Epidemics run along the fault lines of inequalities and we can and must close the gaps."

A recent survey of more than 13,500 LGBTQ people in 138 countries presented at the conference showed that COVID-19 is having a devastating impact on this community worldwide.

Nearly half the respondents said they faced economic difficulty, with many unable to meet their basic needs. More than one in 10 had lost their jobs and nearly half expected to do so in the wake of the pandemic. Some respondents said they had turned to sex work to support themselves, and sex workers reported that the pandemic had reduced their ability to negotiate safer sex practices.

"These are remarkable times and defining times," he said. "Every conversation we have now sits at the confluence of the COVID-19 pandemic and a new global reckoning with systemic racism. It is our job to make sure that HIV remains a part of the conversation and to connect the dots between conversations. We must redouble our efforts to ensure that the gains made in HIV are not lost, that the work of ending HIV continues, and that the lessons of HIV are applied."