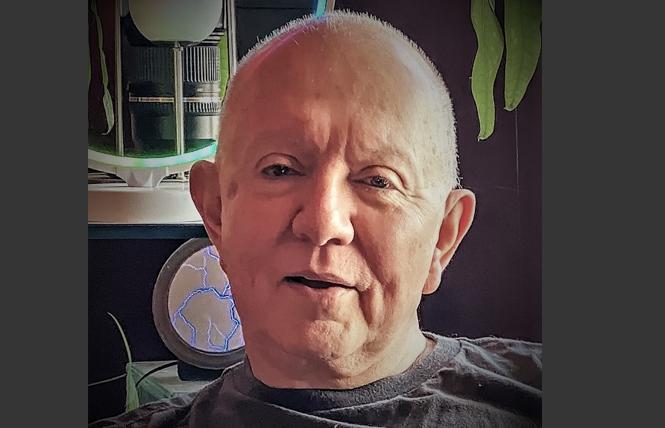 As a survivor of the AIDS crisis of the 1980s, I remember how our community was torn apart by the two camps that were formed around the practice of safe sex. Condoms or no condoms? As the number of cases rose, the arguments heated up. The Bay Area Reporter's obituaries were no longer confined to just one page. And these pages, with the all so familiar faces, would be published every week. Yet the argument persisted by those who scoffed at the notion of safer sex.

Now years later, I see it all over again. Social distancing and wearing face coverings seem to be the point of contention. Wear a mask and practice social distancing is the mantra of the majority. Wear a mask and live in fear is giving up your rights comes from the other camp. Months into the terrible novel coronavirus pandemic and we are still receiving mixed messages from our supposed leaders. I hear in the media that an official in Texas who advocates the non-use of face masks thinks that Dr. Anthony Fauci of the National Institute of Allergy and Infectious Diseases doesn't know what he's talking about and is spewing false information. It's all so confusing.

As of today, there are now over 130,000 dead Americans killed by COVID-19 — and that figure will rise. That's 130,000 people who didn't ask for this — their loved ones heartbroken by their loss. I know that feeling as I lost so many I loved during the AIDS crisis. It hurts to lose someone so needlessly, and yet here we are again. The numbers keep going up, as Americans become more complacent.

As I rode in a car through the Castro the other day, I just couldn't believe the number of people out and about as if there were no pandemic. I did see people wearing masks, but unfortunately, I saw far too many not wearing a face covering or practicing social distancing. It hurt my heart to see this.

If we, the people, do not get our act together soon, I can imagine that the following scenario could be a possibility in the not-too-distant future.

The new COVID sensibility
As Harry and Sam stood near the front of the line to get into their favorite bar, Harry looked back to see how long the line was. It only ran three-quarters down the length of the block, much shorter than when they first queued up at the rear. The line consisted of several people standing right up against each other, with no one wearing a mask. The general attitude was that the people had the freedom to wear a mask or not, because forcing people to don a face covering was taking away their freedom. The right-leaning Supreme Court had just ruled that masks could not be forced on the American people.

"That damn COVID-19 was putting a damper on our freedoms," Harry thought to himself.

"Oh, there goes another one," he mumbled to Sam as he nudged him to turn and look.

"Oh, yes, too bad he didn't make it into the bar in time to have a little fun before it got him," replied Sam. "They'll come and sweep him up in a bit."

President Donald Trump was well into his second term and COVID-19 had become the norm. Three and a half years into the pandemic, there still was no vaccine and the virus has mutated into a very efficient killing machine. Now, infection and death came within hours of each other. It was now the norm to see people just fall dead where they were. So common now, that there were special cleanup crews that would come and remove the deceased party within a half-hour; after all, the economy is more important than people's lives. That was the mantra of Trump now. No one was even allowed to stay home and shelter-in-place anymore.

As Harry and Sam inched closer to the entrance to the bar, they could see some bodies being carried out by the special crews.

"Look at that Harry, they just made more room for us to get in. It won't be long now," Sam said, with a tinge of excitement in his voice. "We've been out here in this damn line for almost three hours now."

"Did you hear about the last Trump rally that was held in Texas about two weeks ago?" Harry asked Sam. "It went pretty well this time, only 213 people dropped dead this time, much better than the last one, right? Damn, 604 dead at that one! The crews were working very hard to haul them out of there so that the others could continue their adoration of Trump."

Sam thought about what Harry had just said. Those numbers would have been much more shocking a few years ago, but the country had grown very complacent over the years. "It's about the economy" signs and billboards had littered the country on Trump's orders. Each evening newscast would always start with that reminder to the viewers, and the high daily death count was now relegated to scroll at the bottom of the screen. Trump had decreed that would be the only way the death toll would be allowed to be announced. Fox News was now the only news outlet in the country after Trump had the licenses revoked of all the "fake news" networks in the land. That was with the help of his new vice president, Sean Hannity, who came on board after Mike Pence passed away from the virus last year.

America was the only country that even had COVID-19 anymore, with every nation in the world banning any entry by an American into their country. Trump continues to hold his very popular rallies with his adoring followers who chant, right up to their last breath, "Make America Great Again!"

Since moving to San Francisco in 1981, Daralt, who uses one name, has owned and operated A Taste of Leather (1988-2010), and co-owned Mack Folsom Prison (1992-2010). After his heart attack and subsequent quadruple bypass in 2017, he has taken up writing, photography, and music production.