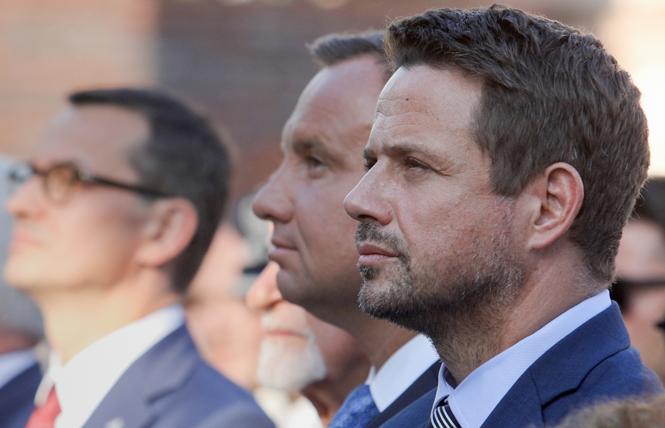 Elected to office in 2015, Duda, leader of the Law and Justice party, has gained notoriety for taking away LGBT rights and spewing anti-gay rhetoric, particularly during elections. In 2015, he vetoed the Gender Accordance Act. In 2018, he threatened backing a Russian-style anti-gay propaganda law. Last year, he trumped up anti-gay rhetoric and supported so-called LGBT-free zones in Polish cities. Most recently, he promised to protect Polish families from the propagation of "LGBT ideology" in public institutions.

On Sunday, June 28, European Union Commissioner for Equality Helena Dalli pushed back on Duda, telling France 24 that the governing body could withdraw some of Poland's funding if the zones are actually set up.

Leading up to Sunday's election, Duda cozied up with President Donald Trump at a last-minute reception at the White House June 24.

The Human Rights Campaign condemned the Polish president's visit ahead of the election.

HRC President Alphonso David criticized Duda's "clear and unambiguous attempt to leverage Trump's anti-LGBTQ rhetoric in the Polish elections" to rally his base voters rather than offer Polish citizens "effective solutions" to the country's issues, especially during the pandemic.

Instead, "Duda is attempting to shore up his base by running on a virulently anti-LGBTQ platform," David said in a June 22 statement from the organization. "It is a vile, manipulative, and dangerous election tactic that threatens the lives, freedom and dignity of LGBTQ people in Poland.

"By supporting Duda in advancing an anti-LGBTQ platform, President Trump, once again, shows that he is no friend to the LGBTQ community — in the U.S. or abroad," he continued. "We will hold him accountable this November."

In stark contrast, Trzaskowski, who is with the Civic Platform Party, is pro-E.U. and was Poland's first mayor to march in Warsaw's Pride parade in 2019.

Report shows acceptance of LGBT people growing
LGBT people are increasingly winning over hearts and minds the world over, a new survey shows.

Across the more than 30 countries surveyed by the Pew Research Center, a median of 52% agree that homosexuality should be accepted with 38% saying that it should be discouraged, according to the new report published by Pew June 25. For the report, Pew used data from a survey conducted across 34 countries from May 13 to October 2, 2019, totaling 38,426 respondents.

Acceptance of LGBT people is largely dependent upon country, age, level of education, wealth, and religious influence, which haven't changed since Pew conducted its last survey in 2013.

What has changed, researchers noted, is the double-digit increase in acceptance of homosexuality among the countries surveyed from 2002 to 2019.

India was first included in the survey in 2014, according to researchers, when Section 377 of the country's penal code used to criminalize gay people was reinstated by the country's Supreme Court. Since then the same court struck down the British colonial-era law in 2018.

The country's gross national product and development strongly correlate to a significant influence on people's levels of acceptance of LGBT people, according to the report. People living in wealthier and more developed nations with a per-capita GDP of more than $50,000 had the highest levels of acceptance, whereas nations with less than $10,000 GDP had the lowest acceptance of LGBT people.

Similarly, to the findings in the 2013 Pew report Poushter found that, "Generally, more educated, younger and less religious respondents voiced greater acceptance of homosexuality than those who are less educated, older, or more religious."