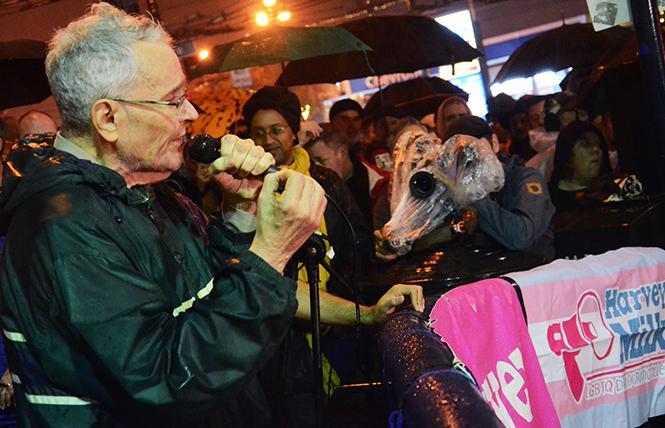 Harry Britt, a gay man who succeeded Harvey Milk on the San Francisco Board of Supervisors, died Wednesday, June 24. He was 82.

Mr. Britt had been a patient at Laguna Honda Hospital in San Francisco for some time. He had suffered from various health issues over the years.

Gay former supervisor and state Assemblyman Tom Ammiano, who worked closely with Mr. Britt over the years, told the Bay Area Reporter Wednesday that he will miss the longtime LGBT leader.

"I feel the loss of his friendship," Ammiano said. "He accomplished so much."

"If you look up 'unsung hero' in the dictionary, you'll see a picture of Harry," Ammiano added.

Tim Wolfred, another friend and the first openly gay man to serve on the City College board in the 1980s, said he hopes people remember Mr. Britt as a pioneer in fighting for the rights of all people.

"I think Harry was a hardworking fighter for LGBT rights and for other progressive issues in this city," Wolfred said. "He served as a supervisor for 14 years and was a great person. I hope he will be well-regarded for all he did for us."

Mr. Britt was appointed to the Board of Supervisors in 1979 by then-mayor Dianne Feinstein, following the November 1978 assassination of Milk and then-mayor George Moscone.

"I was sad to hear about the passing of Harry Britt. I appointed Harry to Harvey Milk's seat in 1979 after the assassination, and Harry went on to a long career on the board. He served until 1990, including two years as president," noted Feinstein in a statement to the B.A.R. "Harry was progressive before the word became vogue. He was a powerful advocate for the gay community who never took no for an answer. Strong, passionate advocates like Harry have done so much for San Francisco and the country, and I'm glad to have known him. He'll be missed."

Gay District 8 Supervisor Rafael Mandelman, like Mr. Britt the lone LGBT member of the Board of Supervisors, said Mr. Britt fulfilled the dreams of Milk.

"It is nearly impossible to adequately express what Harry Britt's leadership has meant to our city, and the tremendous impact that he has had on the queer community and progressive politics over the last four decades," Mandelman stated to the B.A.R. June 24. "Though it was Harvey Milk's dream to increase queer representation in our elected bodies and fight for full legal equality, it was Harry who fulfilled that vision and led us through difficult times to victories that would not have been possible without him. He was the only openly gay elected official in City Hall at the onset of the HIV/AIDS epidemic, leading and advocating for the gay community during one of our darkest hours and he was a champion and pioneer for LGBTQ equality pushing policies like domestic partnerships into the national conversation. May his memory be a blessing."

"Harry Britt would not have wanted to be memorialized as a 'legend' or a 'hero,'" the board stated.'" But for all of us, he will always stand as a queer legend.

"Harry was the chosen political successor of our club's namesake, Harvey Milk, and helped define progressive & queer values throughout San Francisco," the statement read. "Harry believed that tepid liberalism kept the powerful satisfied with the status quo and that none of us should rest until there is a fundamental transfer of that power to queer and trans folks, women, people of color, and those most damaged by the ills of our society. His fight lives on in all of us.

The club said that Mr. Britt would want the community to "turn our pain and sorrow into tangible action."

The Harvey Milk LGBTQ Democratic Club, devastated by this loss, will continue to fight to do just that," the board stated. "Let the pain of this loss ignite a flame inside of all of us to do better for those of us with less. Let that flame grow bigger and brighter in our shared fight for radical racial justice. No apologies. Black Lives Matter."

"Harry Britt was a pioneer in the LGBTQ community's entry into electoral politics," Wiener stated. "He deeply understood that while allies are essential, we must have our own seat at the table. Harry helped create political space for people like me to serve in elected office. Harry's death is a tragedy. He will be missed."

Jackie Fielder, a queer educator running against Wiener this fall, said that Mr. Britt was the first elected official to endorse her.

"It's a sad day. Harry dutifully carried on Harvey's legacy on fighting for LGBTQ people and marginalized people everywhere," Fielder said. "He felt everyday people should have more of a say on the policies that affect our own lives than big business, real estate companies, and corporations."

"All San Franciscans mourn the passing of Harry Britt: a pioneering LGBTQ leader in our community and country. He was a leader who carried forth the mission of Harvey Milk while building his own beautiful legacy of progress for all people in our city," said Pelosi in a statement to the B.A.R. "Harry's courageous leadership made a difference, as he worked tirelessly to lift up LGBTQ representation in politics and ensure that more LGBTQ Americans could take their seat at the decision-making table."

Mr. Britt was closely tied to the city's progressive LGBTQ Democratic club, which renamed itself in honor of Milk. Last month, in a Facebook post addressing recent police killings of Black Americans, the Milk club included Mr. Britt's response to the White Night Riots in 1979 sparked by the lenient verdict handed down to Milk and Moscone's murderer, Dan White, a former city police officer and firefighter.

"Harvey Milk's people do not have anything to apologize for," said Mr. Britt. "Now the society is going to have to deal with us not as nice little fairies who have hairdressing salons, but as people capable of violence. We're not going to put up with Dan Whites anymore."

In a Facebook post Wednesday gay former Santa Cruz mayor and state Assemblyman John Laird noted that he and Mr. Britt in the early 1980s were the only out city officials in Northern California. They would often speak together around the region, Laird recalled, such at Sonoma Pride in 1984.

"Harry was a true trailblazer and his voice will be missed," said Laird, who is running this fall for a state Senate seat.

A gentle giant
Mr. Britt was born June 8, 1938 and grew up in Port Arthur, Texas. He got married in 1960 and subsequently became a Methodist minister in Chicago, where he ministered to two congregations.

"Harry Britt was a gentle giant of a man," former supervisor Carol Ruth Silver, who served alongside him on the board, told the B.A.R. "His training as a religious leader — that background allowed him to add quotations from the scriptures to great effect. He was a wonderful orator; when he, not frequently, but when he rose to speak it was a treat to hear him. He didn't quite have the charisma that Martin Luther King had but he had that same preacher's cadence to his speeches."

After the tumultuous late 1960s, Mr. Britt's marriage ended and he left the Methodist church. After moving to San Francisco in 1972, Mr. Britt began to explore his own homosexuality and subsequently became a protégé to a budding Harvey Milk.

On an audiotape Milk recorded before his death, and which was only played afterward, Mr. Britt was named as one of four acceptable candidates to replace Milk on the Board of Supervisors in the event of such an assassination. Feinstein chose Mr. Britt, who was subsequently elected until he left office in 1993.

Silver recalled being summoned to the mayor's office for a private talk with Feinstein, who asked her about Mr. Britt. At the time she didn't know him well, though the two progressive leaders would become allies on the board and close friends.

"There was a swirl of newspaper stories and everybody was talking about who was going to be the one. We all knew Harvey had named Harry as the best choice in his opinion," recalled Silver, who remembers Feinstein asking her about Mr. Britt. "She said, 'Harvey suggested him to fill the empty seat, and I am considering that.' She looked at me very steely, as Dianne does, and very serious; she said, 'Is he OK?' I said, 'Madame mayor, I think you will be proud if you appoint Harry Britt. He is intelligent, he is well spoken, and he is Harvey's legacy.'"

The next day Feinstein announced her appointment of Mr. Britt.

"I am not sure she was always happy with his positions, as he was to the left of Dianne, but she wanted to do the right thing," said Silver.

During his time on the board, Mr. Britt introduced San Francisco's first domestic partnership legislation, which passed the Board of Supervisors in 1982 but was vetoed by Feinstein. Similar legislation became law in 1989. 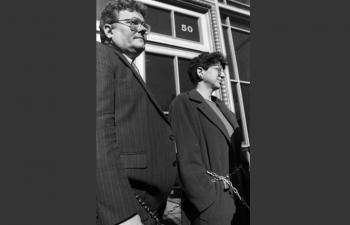 Supervisor Harry Britt, along with Ellen Schaeffer, chained themselves to the entrance of the old Federal Building during a protest at the ARC/AIDS vigil in January 1989.

Dark days of AIDS
His tenure on the board also coincided with the darkest days of the AIDS epidemic. In January 1989 Mr. Britt took part in the protest and sit-in at the old Federal Building in the city's Civic Center area officially known as the ARC/AIDS Vigil, ARC standing for AIDS Related Complex. He chained himself along with other participants to the entrance of the building at 50 UN Plaza to call attention to the federal government's utter failure to deal with the deadly health crisis that killed thousands of the city's gay men.

Mr. Britt was one of the first members of the Democratic Socialists of America, which was founded in 1982 and now has upward of 70,000 members.

"It is impossible to adequately express what Harry's leadership has meant to our city, and the tremendous impact that he has had on the queer community and progressive politics over the last four decades," Mandelman said in a January 2019 speech about Mr. Britt. "Harry was the moral compass of the Board of Supervisors during his time on this body and was the backbone of our local progressive movement during some of its most trying moments."

UPDATED 6/24/2020 with comments from Senator Feinstein and Speaker Pelosi.

Updated, 6/24/20: This article has been updated to include the Milk club's statement.