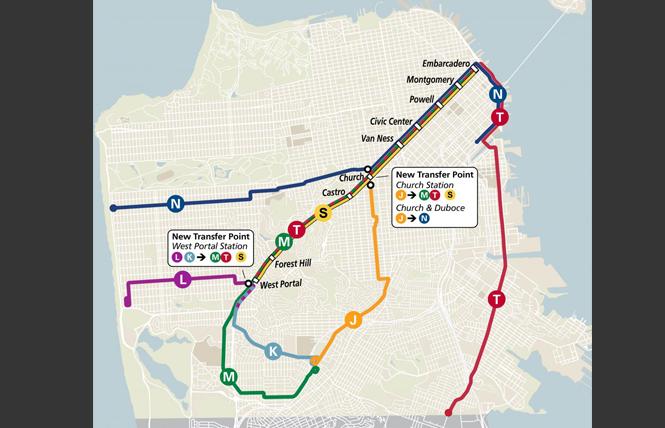 The map is being redesigned to reflect several route changes that the San Francisco Municipal Transportation Agency plans to implement in August. The routes for three of the subway lines are being reconfigured in order to help passengers adhere to new safety protocols required by the novel coronavirus outbreak.

Since late March when the city implemented shelter-in-place orders that drastically reduced transit ridership, and several SFMTA employees contracted the virus, the underground subway system has been shuttered. As more businesses reopen in the coming weeks, and schools get ready to welcome students back for the fall semester, the SFMTA is readying to revive subway service in August.

When it does, riders will encounter two significant changes. For those residents of the Castro, Noe Valley, Glen Park, and other neighborhoods serviced by the J-Church subway line, they will now have to disembark from the trains when they reach the intersection of Church and Market streets. To continue downtown, riders will need to descend underground via the Church Station and board subway trains headed inbound.

Because Muni can only run one-car trains on the J-Church line due to how several street-level stops are configured, particularly on Liberty Hill near Mission Dolores Park, it makes it difficult for passengers to maintain a safe physical distance from each other. Thus, the J-Church will no longer enter the underground subway system via the Duboce Tunnel behind the upper Market Street Safeway shopping complex.

Instead, it will turn around and head back out toward the Balboa Park Station and hopefully provide faster service for passengers along the route. The N-Judah subway that also uses the Duboce Tunnel will return to service in August with two-car trains.

The M-Oceanview line is being combined with the T-Third line and will run with two-car trains servicing the new interlined route. The L-Taraval and K-Ingleside lines are also being interlined into one new route with one-car trains.

Like the J-Church trains, those trains also will no longer enter into the underground subway system as they used to do via the West Portal Station. They will remain aboveground and run from the SF Zoo to City College at the Balboa Park Station; riders will need to disembark at West Portal to transfer to the M/T line or S-Shuttles to get downtown.

More S-Shuttles with two-car trains will be run between the West Portal and Embarcadero stations. By reducing the number of lines inside the underground system, Muni expects service will be faster along all of the lines and cut back on delays due to trains getting stuck inside the subway system.

"We are all too familiar with the routine backups that occurred in the Metro rail tunnels before COVID-19," acknowledged the SFMTA in a June 18 post on its website announcing the coming changes. "Trains would be stuck outside the tunnels, between stations and on the platforms for long periods, often unable to let customers on or off. For years J Church and N Judah customers have experienced delays waiting to enter the tunnel at Duboce."

"If reliability increases, people will be happy. But if it turns out people are waiting a long time to get on a train in the tunnel it is not going to be good," he said.

The route changes will result in a new map for the subway system. As the lines are color-coded by Muni, it will mean a blue strip for the N-Judah next to a green and red checkered pattern for the combined M/T line then a yellow strip for the S-Shuttle running along Market Street between the Church and Embarcadero stations.

Push for rainbow maps is paused
As the annual Pride parade normally goes up Market Street, LGBTQ advocates for the past two years have been pushing to see Muni rearrange its subway map so that the train lines resemble the colors of the Pride flag. The late gay artist and activist Gilbert Baker created the six-striped rainbow flag that is now a global symbol for the LGBTQ community.

It was a simpler design than that of the first flags Baker created with his friends Lynn Segerblom and the late James McNamara for the 1978 San Francisco Pride parade and celebration at the request of the late gay supervisor Harvey Milk. Those flags had additional colors and one featured white stars in a blue field of fabric.

As it turns out, Muni has been using all but one of the colors of the rainbow flag to designate five of its six subway lines on the maps seen posted inside the train cars and in subway stations. But the colors do not match how they are assembled on the rainbow flag, with red at the top and purple on the bottom. Orange is used for the J-Church, purple for the L-Taraval, and a sky blue for the K-Ingleside.

Equality California, the statewide LGBT advocacy organization, first floated the rainbow Muni map idea during Pride weekend of 2018. It increased its efforts last June by releasing a video online that showed how the Muni lines could be color-coded to form the rainbow flag running down Market Street on the map so people could "Ride with Pride."

But in an interview with the B.A.R. before the health pandemic struck, SFMTA General Manager Jeffrey Tumlin said it wasn't possible for the transit agency to adopt the rainbow map concept. One reason, he noted then, was the agency was already looking at the idea of halting J-Church trains when they reached Market Street.

"First of all, I love the idea. But it creates some logistical challenges, relative to what we want to do with the subway," Tumlin, a gay man, said at the time. "So, for example, if we succeed in really, you know, in putting three or four car trains on a West Portal shuttle and terminating the J at Church Street Station, it ruins the rainbow. I don't want to kill the rainbow."

He joked it was "a really funny position" for a gay man to be confronted with, adding that it would be hard to also switch the colors for the different subway lines that customers have been accustomed to for decades. Plus, Tumlin wasn't sure how maintaining the rainbow flag pattern would work when additional lines are added in the future, as Muni has long eyed extending the subway system throughout the city.

"I still wish we could but I don't think there's a way of, of having it support our ambition, which is to really be upgrading the subway system," said Tumlin.

Asked about the status of its Muni map initiative, EQCA told the B.A.R. this week it had mothballed it for the foreseeable future.

"Due to the COVID-19 pandemic and in-person Pride festivals — where we normally conduct our education efforts — largely being canceled, we have hit the pause button on this campaign. We are extremely grateful to SFMTA for their work during this crisis," stated EQCA deputy communications director Josh Stickney.