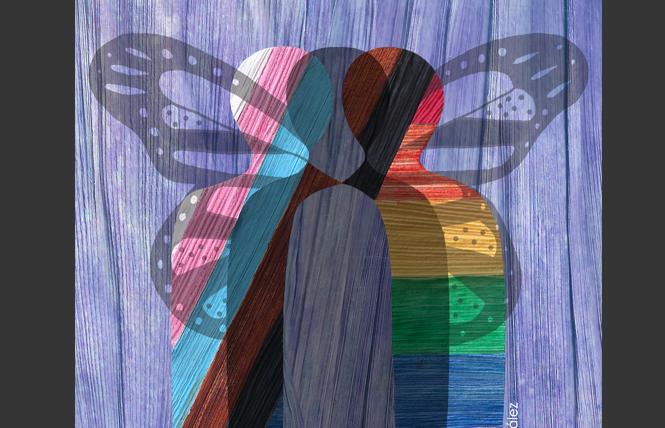 The cover for what will be the Spanish version of "Queer and Trans Voices: Achieving Liberation Through Consistent Anti-Oppression" was done by Chicana queer artist Suzy Gonzalez. Photo: Suzy Gonzalez

A year on from Stonewall's 50th anniversary, we find ourselves in quite an odd time in history. This 51st year of Pride will also be a historic one for vastly different and unforeseen reasons. This year, in a first, we welcomed it from a virtual distance across the globe. Regardless of the venue, we must continue to openly acknowledge and give our gratitude for the sacrifices, the struggles, and the path created by Mother Marsha [P. Johnson], Sylvia Rivera, Miss Major, Victoria Cruz, and all other Black, Brown, and Indigenous trans womxn (BBITWx) that are the reason we are here and openly queer. After all, we must never move on from the collective understanding that Pride commemorates the Stonewall riots led in part by BBITWx. While we must not diverge from this knowledge, we must move forward in our joint understanding of why this is important beyond yearly "celebrations."

This shift becomes even more pressing when we recognize that 2019, the very year of Stonewall's 50th, was recorded as the deadliest year for Black, Brown, and Indigenous trans womxn. Following this, not even six months later, we find ourselves in a global pandemic, in which our most vulnerable, Black, Brown, and Indigenous queer and trans people (QTBBIPoC), are again disproportionately affected by identities compounded with race and the racial inequality that determine their worth, safety, and access in society. With fewer resources, less access to medical care, unstable employment and income, it's not a surprise that even when it comes to the preceding HIV pandemic that viciously affected our very community, USian Black (Black men from the U.S.) gay men and other marginalized genders (MaGe; coined by Crystal Michelle) were and are still the most affected by it, even in 2020. The HIV pandemic never actually left our community. It simply stopped affecting the white majority akin to reopening orders despite how COVID-19 disproportionately affects BBIPoC. And, as George Floyd's murder and the protests that followed across all 50 states, Black communities still face disproportionate police brutality and generally, disproportionate systemic inequality throughout all institutions since forced on to Turtle Island as property over 400 years ago.

These compounding experiences and realities are often ignored along with QTBBIPoC's acts of justice within the LGBTQIA+ movement itself, including consistently protesting the increasingly white-washed, corporatized, police-supporting, and middle class LGBTQIA+ movement that replaced its history of radical politics (led by QTBBIPoC) with a sanitized assimilationist approach that left the most marginalized folks of the LGBTQIA+ movement abandoned and forced to remain in supremacist hierarchies queers claimed to be fighting against. In essence, the "mainstream" LGBT movement effectively gentrified itself years after Stonewall and displaced QTBBIPoC as leaders. It took over by weaponizing race in the same way cisness and straightness, also through colonialism, weaponized our identities to claim authority over us. The movement replicated the same system that used nonhuman animals to otherize us into sub-human categories while also blatantly erasing some of us like was done to Two-Spirit people.

Black activist-theorists Aph and Syl Ko (2017) created a framework to analyze the interconnections between two forms of liberation not often recognized as related — nonhuman and human liberation. They contended that, "Confusion is usually a symptom of decolonizing yourself from the mainstream system." A novel-first release by Sanctuary Publishers, "Queer and Trans Voices: Achieving Liberation Through Consistent Anti-Oppression" (Feliz-Brueck and McNeill) — is very much so the product of that confusing, complicated evaluation of challenging views on widely held queer beliefs, interconnections, and activism. Queer and trans voices dare to examine how speciesism, white supremacy, and the LGBTQIA+ movement are entangled with one another and working in unison to create movements that play right into supremacist hierarchies meant to erase us and keep us from our own liberation. The book takes what we know as people with intersecting identities and creates a call for the LGBTQIA+ movement to recognize a part of the struggle that we have yet to admit is vital to trans and queer liberation along the need to decenter the mainstream and allow our most marginalized to lead. Stonewall 51, Pride 2020, is our chance to do just that while embracing purposeful action and acknowledgement beyond gentrified single-issue activism.

One of the book's contributors, LoriKim Alexander, a Black queer activist at the heart of the movements for both non/human rights, writes:

"Don't include me. Don't include us. We, trans, nonbinary, and queer Black and Brown people have always been here. We've been here in all movement spaces and in all the creations of movement philosophies. Whether cis and straight people like it or not and whether they have been able to reconcile this with their idea of what our liberation movement should look like, or the history they've been mistold, we've been here" (Alexander, 267).

Although pushed to margins for their intersecting identities, QTBBIPoC have always been here and have always led the way, and yet, 51 years later, they are still here waiting for everyone else to catch up, for the movement to extend itself beyond the single lens that drives the mainstream movement that long forgot how we got here and why it needs to center our most vulnerable. Only in recognizing this, embracing consistent anti-oppression as a praxis with a lens that is aware of how LGBTQIA+ oppression is connected to all other forms of oppression, both human and nonhuman, will we be able to finally move towards achieving the liberation we have envisioned.

Let the 52nd year of Pride be one where we took the time away from each other to work on ourselves as a movement beyond the performative, beyond tokenized inclusion, and beyond cosmetic diversity.

Julia Feliz is a Two-Spirit Non-binary Queer Black Tainx Boricua writer, illustrator, scholar, and resource activist committed to raising the voices of all marginalized communities -human and nonhuman. They are the designer of the New Pride Flag (www.newprideflag.com) and founder of SanctuaryPublishers.com, a non-traditional book publisher with a focus on activism and giving back.

Z. Zane McNeill is a genderfluidflux dirt queer from the mountains of Appalachia. They are interested in queer oral history and archival projects as a way to uplift marginalized voices.