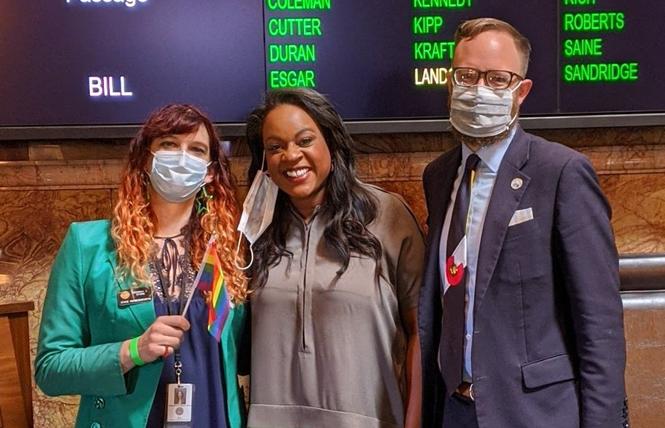 Earlier this year the Colorado Legislature was poised to ban criminal defendants from using a gay or transgender panic defense at trial. Then the novel coronavirus hit in mid-March, and the lawmakers in the Centennial State turned to paring down their legislative agenda ahead of suspending their session to adhere to shelter-in-place orders.

Thus, leaders in the state Senate pulled the gay and transgender panic defense ban bill, as they had yet to vote on it. The decision angered its lead sponsor in the lower chamber, state Representative Brianna Titone, the first transgender person elected to a state legislative seat West of the Mississippi.

When the Legislature decided to reconvene in late May to finish its session, Titone sought to revive the bill.

"I was angry so I wrote a letter to the Senate president and majority leader and the Senate sponsors trying to get them to bring the bill back," Titone told the Bay Area Reporter in a recent phone interview.

Her plea worked, and last week the bill flew through both statehouse chambers, garnering one lone no vote in the House.

"It was a good bill that had bipartisan support from the get-go," said Titone, 42, first elected to her suburban seat northwest of Denver in 2018.

The vote in the House took place Friday, June 12. Titone noted in a tweet its passage marked "symbolic progress on the anniversary of #PulseNightclub today," referring to the domestic terrorist attack on an Orlando gay club in 2016.

"We are making a bold statement that we value the lives of the LGBTQ community and it is Pride Month. It is a Pride miracle this bill ended up passing this year," Titone told the B.A.R. "Being it could have just gone away if I had not taken the initiative to ruffle some feathers, frankly pissing people off in the Senate."

In light of the nationwide protests against police killings of African Americans and the deaths of transgender people, most of whom are black trans women, Titone said passing the bill took on even more import this month.

Gay Colorado Governor Jared Polis, a Democrat, is expected to sign the bill in the coming days, bringing the number of states banning such a legal tactic to 11. (California was the first to do so in 2014.) His press secretary, Conor Cahill, told the B.A.R. this week that the governor's office has yet to receive the bill and is working on the signing schedule.

Titone's tenacity in advocating for the bill is illustrative of how she has approached representing her constituents in the Legislature. It has also garnered her favorable headlines in the state since she took her oath of office and a growing national following.

"The work I'm doing here is what the people want. That is what I came here to do," said Titone, who was a volunteer firefighter in upstate New York where she grew up.

She abandoned her dream of being an FBI special agent when she transitioned in her late 30s. A decade ago she moved to Colorado after landing a job with a Denver-based mining consultancy. Titone is a geologist and works as an information technology professional.

"I decided I wanted to live in the mountains," Titone said.

During the suspension of the legislative session Titone continued to work from home, assisting constituents impacted by the health crisis. She also prepared to deal with the state's ballooning budget deficit due to the pandemic, which led several of her bills with larger price tags to be indefinitely postponed.

"We want to do everything we can to try to help those who are struggling, but what can you do when you just don't have the money?" asked Titone when the B.A.R. first spoke with her in late May. "It is very emotional for us when we are cutting programs that help people. But this is the difficult job we signed up for, and we have to make tough choices."

Two years ago Titone defeated a Republican incumbent by 439 votes to become the first transgender person to serve in her Legislature and only the fourth in the country. The quartet are part of an affinity group dubbed the U.S. Trans Caucus for transgender lawmakers across the country and in May held their first virtual get-together for a conversation that was posted to YouTube.

Following the election last week of Rosemary Ketchum to a West Virginia city council seat, making her the first trans lawmaker in her state, Titone reached out to her by phone. It was a courtesy she wished she had received and plans to do for other trans and nonbinary candidates.

"My race fell so far under the radar it didn't end up on Time magazine. It barely ended up on the local TV news and the Denver Post," said Titone, recalling how she had to fight for endorsements from LGBT and Democratic groups because she was relatively unknown and a first-time candidate few expected would win her race.

This year, Titone is being prominently backed by the LGBTQ Victory Fund and is unopposed in the Democratic primary set for June 30. The woman she defeated, Vicki Pyne, is unopposed in the GOP primary and the two are headed for a rematch in November.

Titone told the B.A.R. she is expecting it will be a hard fought reelection campaign. She argued that she has delivered for her district since being elected and is hopeful she will be given the opportunity to continue representing it.

"My track record and our messaging we have is going to speak for itself. That is always an advantage, to have policy to back up a campaign with," she said. "I am not taking it for granted, though, I still need all hands on deck to make sure we can win this."

Gay man seated on SF ethics panel
Nearly three decades after he helped establish San Francisco's ethics commission, Larry Bush will now serve on it as a watchdog of the city's civic and political leaders.

The Board of Supervisors confirmed Bush, a gay resident of the Castro district, to the oversight panel Tuesday. He was the only applicant for the seat, which was vacated by Lateef Gray in order to take a position in the district attorney's office.

Bush had assisted with drafting the charter amendment that created the ethics commission in 1994. He served on the Friends of Ethics citizen's group before resigning in 2018.

His term expires February 1, 2023. Bush joins the panel amid continued fallout from a scandal involving a payback scheme that has resulted in three city department heads charged with corruption by federal prosecutors, including former public works director Mohammad Nuru.

Web Extra: For more queer political news, be sure to check http://www.ebar.com Monday mornings for Political Notes, the notebook's online companion. This week's column reported on LGBT candidates seeking election in the East Bay this November.