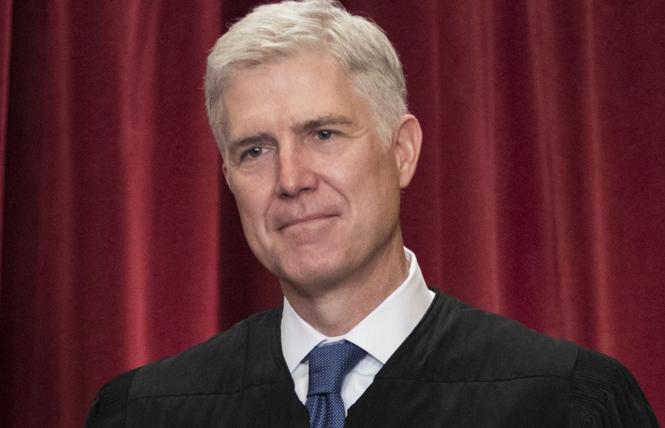 After decades of fighting for the elusive goal of federal employment protections for all LGBT people, Monday's U.S. Supreme Court ruling in favor of LGBT workers is monumental. In a lopsided 6-3 decision, the justices declared that Title VII of the 1964 Civil Rights Act protects LGBT workers from being discriminated against based on their sexual orientation or gender identity. Significantly, this was the high court's first decision on transgender rights, and will have significant effects beyond employment. Achieving equality in the workplace is a game-changer, and one that will help millions of queer Americans.

Title VII prohibits employment discrimination based on race, color, religion, sex, and national origin. It was the meaning of "sex" that was at the center of three cases the court decided Monday (consolidated into Bostock v. Clayton County). Two dealt with sexual orientation (gay men who were fired from their jobs) and one addressed transgender status (a trans woman who was fired after she told her employer of her intent to transition). The court's decision came in one 33-page opinion consolidated under Bostock v. Clayton County.

It was surprising that Neil Gorsuch wrote the majority opinion, a justice that extreme conservatives promoted for President Donald Trump's first appointment to replace the late Antonin Scalia. But rather than adhere to the "originalism" concept Scalia embraced, which gives the law the meaning that its words were understood to bear at the time they were promulgated, Gorsuch used the theory he believes in, "textualism," in which judges look only at the written word.

"Ours is a society of written laws," Gorsuch wrote. "Judges are not free to overlook plain statutory commands on the strength of nothing more than suppositions about intentions or guesswork about expectations. In Title VII, Congress adopted broad language making it illegal for an employer to rely on an employee's sex when deciding to fire that employee. We do not hesitate to recognize today a necessary consequence of that legislative choice: An employer who fires an individual merely for being gay or transgender defies the law."

Gorsuch maintained it's what the words say that's crucial. Using this criteria, it did not matter what the authors of the Civil Rights Act had in mind, or that they might not have envisioned the society we know today.

"An employer who fires an individual for being homosexual or transgender fires that person for traits or actions it would not have questioned in members of a different sex," he concluded.
Trans people in particular will benefit greatly from this decision. Advocates have pushed businesses to hire trans workers for years, as well as for laws that protect workers from sex discrimination in employment. Unemployment in the trans community remains stubbornly high and this decision improves the opportunities for trans people to get and keep jobs.

The Williams Institute at UCLA School of Law estimates that the ruling provides protections to an estimated 8.1 million LGBT workers (ages 16 and older), including 7.1 million LGB people and 1 million trans people.

We in California have had the benefit of strong state non-discrimination laws that include protections based on sexual orientation and gender identity. But people living in 27 other states do not have statutes that expressly prohibit employment discrimination based on these characteristics; Monday's ruling comes as a relief to them and their families. The Williams Institute noted that an estimated 3.4 million LGB workers and 536,000 trans workers live in these states. Getting fired because of who you are is a real issue — and still happens even in states with protections.

Importantly, the decision will have far-reaching effects on many other federal laws prohibiting discrimination based on sex. Just last Friday — the fourth anniversary of the Pulse massacre — the U.S. Department of Health and Human Services made final a rule change that reversed an Obama-era regulation interpreting the ban on sex discrimination under Section 1557 of the Affordable Care Act to apply to cases of transgender discrimination. The fate of that rule is now unclear.

Tragically, two of the plaintiffs in the Supreme Court cases did not live to see the decision. Donald Zarda, a skydiver who was fired, died in a skydiving accident several years ago. Aimee Stephens, the woman at the center of the transgender status case, died in May of kidney disease. But both deserve the community's appreciation for taking their cases to the courts, and their estates should be acknowledged for continuing them after their deaths. The other gay man, Gerald Bostock, who was fired from his county job in Georgia after he joined a gay softball team, told reporters he was pleased with the decision.

The fight for equality is not over. As Jocelyn Samuels, executive director of the Williams Institute stated, "We must continue to ensure that what is now the law for LGBT people with regard to employment discrimination is also recognized as the law in every other sphere of activity. And we must recommit ourselves to achieving true equality across the board for all vulnerable populations, most notably people of color within our LGBTQ communities and more broadly."