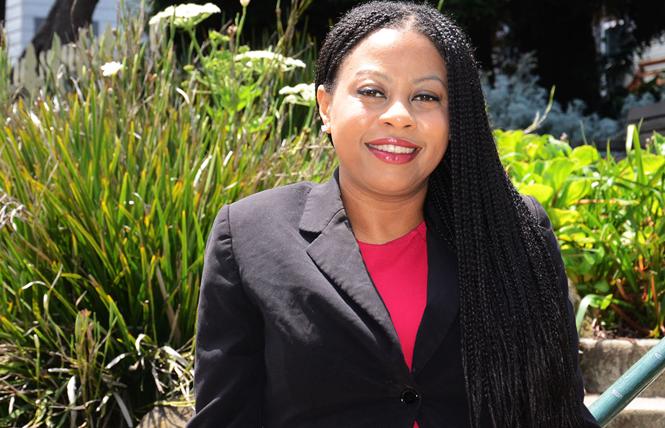 Shanell Williams stood for a recent photo in Koshland Park, near where she grew up in the Western Addition. Photo: Rick Gerharter

It has been a tumultuous first term for City College board member Shanell Williams, once a student of the San Francisco community college and now president of its oversight body. Williams, a bisexual woman, was elected in 2016 amid fears the school would lose its accreditation and be forced to close its doors.

Part of a four-person out majority on the college's oversight body at the time, Williams and her fellow trustees worked with the campus community and other elected officials to keep the institution accredited. They also hired a new permanent chancellor, Mark Rocha, as they grappled with serious budget deficits and declining enrollment.

Last summer, the board adopted its first balanced budget in 10 years, though it faced backlash from students and faculty because they achieved the milestone by cutting courses and staff. It was then learned that Rocha had buried deep within the budget documents significant pay increases for the college's administrators.

Amid a fierce backlash, the board revoked the pay hikes and instead approved raising administrative pay by 10%. Then in March, weeks after city voters approved an $845 million bond to repair City College's buildings, the board placed Rocha on administrative leave.

Days later Rocha resigned, and the board again launched a search for new leadership for the college. Meanwhile, the school was forced to shift its summer and fall semesters to remote learning due to the novel coronavirus outbreak and recently held a virtual graduation ceremony.

And the college's finances continue to crater, leading the board last week to end its long-term lease for its satellite campus at Fort Mason in order to save money. The decision was criticized not only by seniors who take arts classes at the Marina location but also by former Mayor Willie Brown in his San Francisco Chronicle Sunday column.

Of the four incumbent trustees whose terms expire this year, two have decided not to seek reelection — Ivy Lee and Alex Randolph, one of two gay men on the board. The other, board vice president Tom Temprano, is seeking another four-year term as is Williams in November.

SF native
Considering the tribulations and the controversies she has weathered, it is to be expected that Williams will be fielding questions as to why she wants to continue serving on the college board.

"It is a good question. Why am I running for another term?" responded Williams when posed the question by the Bay Area Reporter during a recent phone interview.

Her reason is rooted in her having matriculated at the college and her being a San Francisco native.

"I care deeply about City College of San Francisco," said Williams, 35, the director of community engagement for the California Preterm Birth Initiative at UCSF. "I just see how it transforms lives and all our students who depend on City College to be strong. I just don't want to step away from this commitment at this time."

In light of the unknown impacts on enrollment the college may see in the coming months due to the health crisis, its ongoing budget issues, and the chancellor search, Williams told the B.A.R. she believes the college board needs to have experienced leadership on it to help it navigate the rough road it faces.

"Even though things have been challenging, it has also been quite rewarding," said Williams, who grew up in the city's Western Addition and Fillmore neighborhoods and now lives in the Upper Haight by Buena Vista Park. "I've grown over these last four years as a person and elected official."

But the stress from the role has come at a cost. Last year, Williams dropped her bid for the city's District 5 supervisor seat, citing personal reasons at the time for doing so.

She told the B.A.R. she made the decision following a health scare that led to her being hospitalized for three days and put on blood thinners to treat a deep vein thrombosis, or a blood cot, in her left leg that had turned into a pulmonary embolism.

"I am just really thanking God that I did slow down. If I was still trying to run for District 5 supervisor and do my work stuff and the college board, I could have died," said Williams. "It would have literally been a life or death situation maybe if I was not paying attention to the signs. I think I totally made the right decision to step back and reevaluate it."

As Williams added, "My health is number one. If I don't have my health, I can't help anyone."

Today, Williams said she is taking greater care of her health and that she feels "completely renewed" for her reelection bid following the passage of the college's bond on the March 3 primary ballot and her being elected to a seat on the oversight body for the San Francisco Democratic Party. Ahead of the election, voters in the city's eastern neighborhoods received a mailer that featured two of the city's gay elected officials "introducing" them to Williams.

District 8 Supervisor Rafael Mandelman, who had served with Williams on the college board, and BART board member Bevan Dufty, who had served as the District 8 supervisor, had put together the mailing to help see that Williams joined them on the Democratic County Central Committee. Considering Williams received 2,860 more votes than Mandelman and 3,634 more than Dufty, it could be that they benefited more than she did from the flyer. After all, in her 2016 race for the college board, Williams was the top vote-getter.

"I could not be more thrilled if we rode her coattails to victory in the March election. I am totally duplicitous and made it seem like I was doing something for her," joked Dufty, who had asked Williams to run for one of the DCCC seats. "Shanell is a native San Franciscan and she grew up facing a fair amount of adversity. And I am so proud of her career and focus on health care and education; two of the things so important in life."

Williams told the B.A.R. she was grateful for the support. Others had pointed out the vote total discrepancy between the three candidates, but Williams said she "didn't rib" Mandelman and Dufty about it.

"It was a good feeling to do so well," she said. "Given it was only my second time running for office, I was nervous."

She and Dufty had bonded years ago over both losing their mothers and have grown closer ever since, said Dufty, adding that he has "big plans" politically for Williams.

"What I know about Shanell is she has got a very strong internal compass," he said. "She will be respectful. She is not second-guessing herself. She knows where she is going and that is a wonderful quality."

In her youth Williams ended up in the juvenile justice system and placed into a residential program at Walden House at 15 years old. She was also placed in foster care, and at age 17, after graduating high school in 2003 enrolled at City College.

"My dad and family members have taken classes at City College for many, many years. It is a critical part of the web of our city," she said.

Not only is she confident of her being able to win a second term, Williams told the B.A.R. she believes voters will also pass a spending measure expected to be placed on the November 3 ballot that will funnel $20 million in city funding to pay for the college's workforce development and training programs.

She is one of two out women of color who hold elected office in the city, the other being queer BART board member Janice Li. Williams is also one of the few LGBTQ African American officeholders in the city and Bay Area.

"Besides being African American, being queer can be lonely," said Williams.

She took great pride at being mentioned in the press as a possible appointee for the District 5 supervisor seat when London Breed resigned to become the city's first black female mayor.

"I know it makes my family proud," said Williams. "I am the only elected official in my family; that is a big deal."

For that reason, and the heartfelt messages she has received from young queer people of color from around the country, Williams hopes San Francisco voters will continue to entrust her to help oversee City College. Despite the ongoing challenges, Williams told the B.A.R. she is confident better days lie ahead.

"I am hopeful for the future," she said.