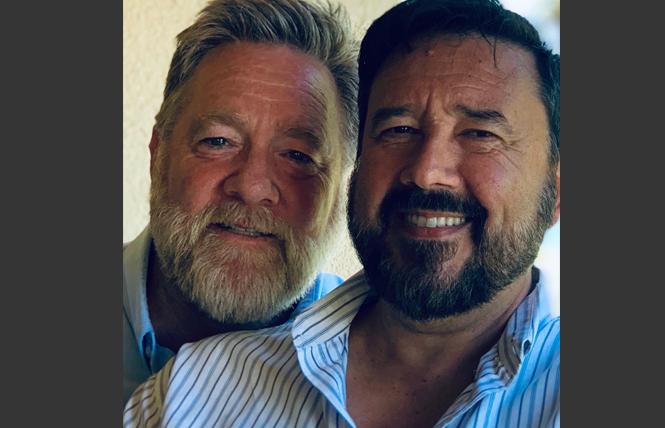 When Martin Jones drove his husband to the hospital in March, he thought it was for symptoms of kidney stones. Within days, however, both had tested positive for the novel coronavirus and Martin's husband, Kevin Jones, was intubated.

Two months later, both are recovering from their bout with the disease that has killed 100,000 Americans.

The couple, who identify as gay and have been together 34 years, discussed the ordeal in a phone interview with the Bay Area Reporter May 20.

Kevin Jones, 59, had been traveling in Europe in mid-March with a friend, just as lockdowns were starting in earnest both there and in the United States.

"We had to leave London early," Kevin Jones said. "When we got back, we thought everything was OK. They asked questions, took our temperature, and I self-quarantined away from my husband even though we were very careful when we were (in Europe)."

But the day after he got back, Kevin Jones started feeling a fever and chills.

"The advice nurse suggested I go to the ER," Kevin Jones said. "But I thought it was due to kidney stones. When I got there, they wanted me to wait in a tent like you see on the news. At that point they put me in an isolation room and I don't remember a thing."

Martin Jones thought that after parking the car at Kaiser Permanente Hospital in Oakland, he could go visit Kevin, also thinking it was the effects of the kidney stones. But the hospital staff would not let him visit.

"(Martin) wanted to come up and say goodbye but they couldn't even let him do that," Kevin Jones said.

Kevin Jones was intubated, which he remained for about three weeks.

"I was pretty close to dying," Kevin Jones said.

The same day Kevin Jones was intubated, Martin took a test for SARS-CoV-2, the coronavirus that causes COVID-19. It was positive.

Martin Jones, 60, had been feeling sick and thought at first that it may have been sympathy pains.

"I had told the doctor 'I don't know if the symptoms are COVID or if this is just anxiety,'" Martin Jones said. "It was incredible exhaustion; It was difficult breathing; this is asthma on steroids."

At one point, Kevin Jones was given a 10-15% chance of survival. Figuring there wasn't a chance of further infection, since both had COVID-19, the medical staff let Martin Jones visit his husband in what were thought to have been his final hours.

"It was a two-week onslaught of bad news: one big, long nightmare; a roller coaster nightmare. Day-to-day he could do a little better or a little worse," Martin Jones said. "We were embarrassed to say we didn't have all our financial arrangements in order."

Martin was enveloped with reading about the disease.

"I was frantically trying to find everything I could about this, and proning (laying a patient flat on their stomach) had been successful for ventilation patients," Martin Jones said.

After Martin Jones mentioned proning to medical staff, they decided to try it.

Dr. John Taylor, the chief of critical care for Kaiser Permanente's East Bay hospitals, told the B.A.R. via phone May 20 that Kevin Jones' recovery could be attributable to any number of reasons.

"He was really, really sick," Taylor said. "We in intensive care see a lot of people, and he was really sick. We felt his condition was getting worse in spite of maximal therapies. There wasn't a risk of transmission between Kevin and Martin and so we let him visit. At that time, we thought he wouldn't have made it through that night."

"The ICU can be a lonely, scary place to be, whether for a patient or a family member, so I want to emphasize his bravery," Taylor said.

Kevin Jones was finally able to return home after a month, but still has regular doctor's visits.

Martin Jones wanted to thank supportive friends and family, as well as the medical professionals who worked to save his husband's life.

"We had people around the world chanting, praying, breathing good things," Martin Jones said. "Kevin always says in a crisis 'Don't ask what you can do — just do something.' I realized that.

"To the one, (the medical staff) were all amazing, even considering the incredible stress they were under," Martin Jones added. "They kept us in the loop, answered questions, and we could never do enough to thank them, and that'd be true even without the success that we had."

The couple had one overriding message in sharing their story: taking the virus and its effects seriously. Until Martin Jones drove Kevin Jones to the hospital, the latter had been self-quarantined away from their house in a nearby cottage.

"I understand why this message gets traction with people who are anxious and fatigued. But more people are going to die," he added.

No, smokers are not 'safer from COVID-19 infection,' UCSF study says
Sign up!