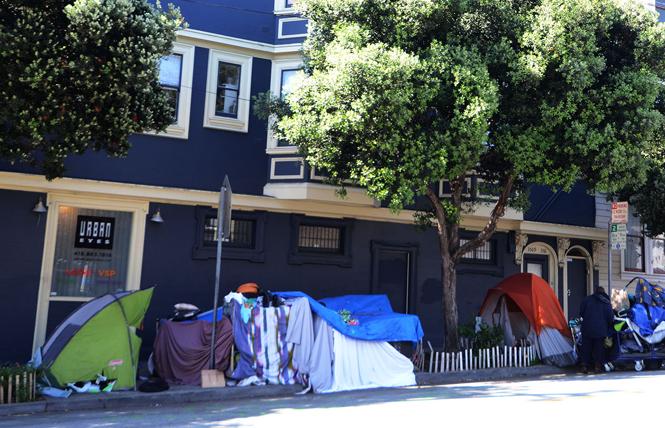 Tents have been set up on 17th Street, at Noe, in the Castro. Photo: Rick Gerharter

Shelter in place, which has been so successful at flattening the curve and saving lives, has been a disaster for street conditions in San Francisco. The Tenderloin has seen the worst of it, but neighborhoods throughout the eastern half of San Francisco are suffering under the weight of growing encampments and the drug sales and other illegal activities that too often accompany them. The Castro, a homelessness hot spot for years, has likewise seen a proliferation of tents, and housed neighbors living next to these growing encampments have reasonably asked how long such conditions will be allowed to continue and how much worse they will be allowed to get.

I have argued that the city needs to explore new approaches, including sanctioned safe sleeping sites, to improve street conditions in the time of COVID. It may seem paradoxical to argue that the solution to the proliferation of street encampments is to sanction, regulate, and manage them, but I believe it is, at least for now. And likewise I believe the best chance to get a handle on street conditions in the Castro is to establish a managed safe sleeping site there. That is why I have been pushing hard to open such a site on the campus of Everett Middle School.

San Franciscans can take pride in our region's data-driven, evidence-based public health response to the pandemic. As our city did in the early days of the HIV/AIDS crisis, we have shown once again that following the science can save lives and prevent misery. But there have been costs. The impacts on our economy have been clear and devastating; the connection between the public health response and the increasing numbers of tents on sidewalks may be less understood. The Department of Public Health, consistent with Centers for Disease Control and Prevention guidance, has rightly directed that our homeless shelters and our jails be thinned out and the tents on our streets be left undisturbed, all to slow the spread of the pandemic. It has generally worked, but we are left with a larger unhoused population and fewer options for bringing these folks indoors.

I have supported calls to place unhoused and marginally housed medically vulnerable people in as many vacant hotel rooms as feasible, but there are real financial and logistical challenges that ensure that even if we eventually manage to house many hundreds or even thousands more vulnerable people in these hotel rooms, they will likely not offer a practical solution to the encampments in the Castro.

On April 28, the Board of Supervisors unanimously passed my resolution urging the city departments to establish safe sleeping sites that would provide 24/7 staffing, ensure safety and follow public health best practices, including maintaining adequate distance between tents and providing access to sanitation facilities, food, and water. On the same day the San Francisco Board of Education passed a companion resolution authored by board President Mark Sanchez, committing the San Francisco Unified School District to partner with the city and make district property available for such efforts. Since then the city has already opened the first such site (called a safe sleeping village) on Fulton Street, between the main library and the Asian Art Museum.

Before and since passage of the resolution, I have been working with neighbors and city officials to establish a temporary safe sleeping site serving the Castro to be located on the Everett parking lot until school re-opens in the fall. There is, as one might expect, some neighborhood opposition but also significant support. Opponents argue that street conditions in the Castro are already intolerable and fear a sanctioned — albeit temporary — encampment will only make it worse. Supporters argue, and I agree, that it would be better to have the Castro's encampments managed in one location than unmanaged and dispersed everywhere.

Opponents also have asserted that the city should simply "enforce its laws," seeming to imagine that the police can and should just "move people along." These opponents are conveniently ignoring public health direction during the pandemic as well as pre-COVID legal requirements that preclude local governments from moving unsheltered people if the city does not have alternative shelter to offer that person.

Safe sleeping sites are not a solution to homelessness. Neither are shelter beds. Both are accommodations to the reality that this city cannot solve homelessness on its own, but that we should try to manage and improve an imperfect situation as best we can. Establishing a temporary safe sleeping site on the lot of Everett Middle School will not solve homelessness in the Castro, but it should improve conditions for housed and unhoused neighbors alike, and that is a reasonable ambition in a pandemic.

Rafael Mandelman represents District 8 on the San Francisco Board of Supervisors, where he is the lone LGBT member.