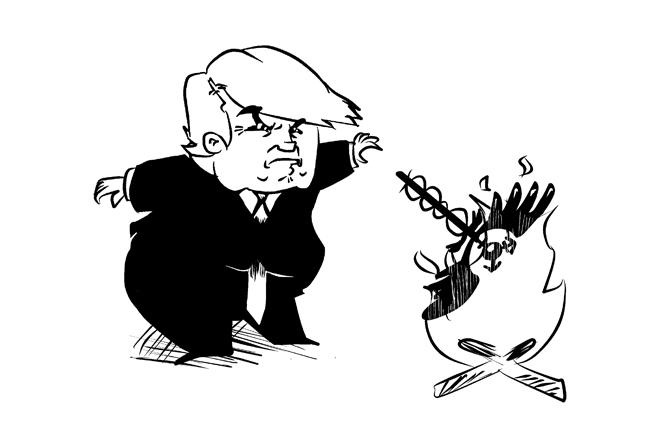 I'll admit that as I write this, I am quite out of sorts. Last week, a friend of mine died due to complications of COVID-19, the illness caused by the novel coronavirus. Another friend's mom passed of the virus. Yet a third friend of mine is presumed to have it, and I am sincerely hoping that she will pull through.

This pandemic, as you can well imagine, is looming quite large in my psyche as I do my level best to keep both me and my partner safe, and worry about so many others that I interact with on a day-to-day basis.

At the same time, I find myself wondering what could happen — perish the thought — if I end up with COVID-19. How will the medical professionals I encounter treat me, and how will my treatment potentially differ because I am a trans woman?

Add to this that most transgender people are living in poverty, making health care even more difficult to acquire. Further still, many face discrimination based on race, or over stigma toward sex workers.

Right now, we are seeing increased numbers of positive COVID-19 cases among communities of color. While I can hardly claim any special knowledge, I cannot help but presume that the virus isn't specifically choosing people by race, so much that those who aren't being treated fairly simply have fewer avenues toward adequate care.

The National Transgender Discrimination Survey: Report on Health and Health Care, released jointly in 2012 by the National Gay and Lesbian Task Force and the National Center for Transgender Equality, found that one in five transgender or gender-nonconforming people (out of 6,450 surveyed) were refused health care, and 28% of those surveyed faced harassment in medical settings.

I have a list of minor maladies I would love to have a doctor check out some day. Various aches and pains, a wart or two, some dental work, and even a fairly unpleasant case of psoriasis. Yet I've made no appointments for any of this for months, even years, preferring to just deal with it all rather than face discrimination and harassment.

It's not healthy to put it off, especially as I get older and presumably require more care. Nevertheless, the expectation of poor treatment makes the alternative just a bit more appealing.

I'm clearly part of that 28% who is more than willing to delay matters — and yet, I know that this is not a good thing for me to do. All of this affects my quality of life, and may shorten it.

With that said, the Trump administration appears to disagree.

We all know that the executive branch has done just about everything wrong that it could regarding the pandemic. It delayed action for several critical weeks amid cries that the whole thing was a hoax that was "going to disappear" as soon as the weather warmed up. There were then weeks of press briefings that were more about an oversized presidential ego than actually helping. Tests were often not provided by the government, many initially were defective, and valuable protective gear was reportedly held, seemingly at ransom, by a president expecting people to say nice things about him in order to receive it.

This would hardly be the sort of environment that transgender people could expect a fair shake, but, as the Bay Area Reporter previously noted, the story got worse in April, as the administration announced plans to roll back a vital regulation in the Health Care Rights Law — part of the aforementioned ACA.

Yes, the very part I mentioned earlier, which protects transgender people from discrimination in health care and health insurance coverage.

It is part of the long-running attempt by Republicans to destroy the ACA, tinged with more than a little anti-LGBTQ sentiment. This all fits into a pattern of trying to remove transgender, gender-nonconforming, and general LGBTQ protections by the Trump administration.

Such a move would be abhorrent at any time, but to do this in the midst of a global pandemic simply adds to the insult: at a time when tens of thousands of Americans have died due to COVID-19, this administration moves to bar more vulnerable people from the care that they need.

That all this is happening as the U.S. Supreme Court prepares to potentially gut anti-discrimination protections for transgender people only adds another layer to it all.

The whole thing is the work of monsters in ill-fitting human suits.

I find myself, in a time when death has become an altogether too common acquaintance, enraged at this. I suppose I should not be surprised by it all, but there's just an extra level of cruelty here. There's no attempt to hide this: the savagery of it all is front and center.

Amid a pandemic, we need to continue, ever still, to protect our rights from those who seek to destroy us. It is that stark.

Gwen Smith doesn't even eat an apple a day. You can find her at www.gwensmith.com