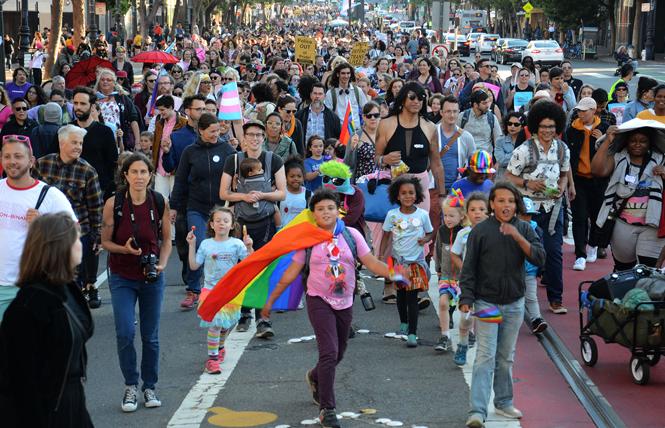 The novel coronavirus pandemic has left the future of large-scale and outdoor events the world over for at least the rest of the year in doubt — and these include longtime LGBT celebrations and festivals throughout the Bay Area.

On the same day, California Governor Gavin Newsom (D) said that it is unlikely any large-scale gatherings will be possible until a vaccine for the novel coronavirus can be widely distributed. A vaccine is not expected until 2021, according to federal health officials.

"The prospect of mass gatherings is negligible at best until we get to herd immunity and we get to a vaccine," Newsom said.

Many in-person Pride weekend events canceled
The Dyke March has occurred each year on the Saturday before the Market Street parade since 1993, but will not this year.

"Given the current pandemic, we cannot in good conscience plan for an in-person event in 2020," Christine Graham, co-chair of the San Francisco Dyke March Organizing Committee, stated after the B.A.R. asked the organization about the status of the event. "We must acknowledge our community's higher risk and protect the vulnerable amongst us. The economic impact to local businesses is significant, and we regret our need to cancel yet another event. The Dyke March remains grateful for the many local businesses, artists, venues, organizations, and individuals whose generosity and support have been essential to past marches.

"While we all organize separately, but in the same spirit, Dyke March is in agreement and supportive of Trans March and SF Pride's decisions to also cancel their in-person events. Everyone's health must be prioritized given the pandemic and uncertainty ahead, but we are already looking forward to a great Dyke March in 2021," the statement continues.

It is unclear, as of press time, whether there will be an online component of the Dyke March this year. The Trans March, on the other hand, has committed to an online event.

"Due to the novel coronavirus SARS-CoV2, which causes the disease COVID-19, Trans March 2020 will not be a physical gathering. The leadership met and has decided to make some kind of virtual event," states a note on that event's website.

The Trans March occurs the Friday of Pride weekend.

Nicky "Tita Aida" Calma, one of the Trans March organizers, told the B.A.R. last week that "I would be more than happy to speak with you perhaps next week once a few ideas have been talked about."

Pink triangle
The installation of the pink triangle atop Twin Peaks on the Saturday of Pride weekend is scheduled to continue as of now, but according to co-founder Patrick Carney "it is still too early to tell if the pink triangle will happen, or even be allowed to happen."

Carney pointed out that this is a milestone year for the installation.

"I haven't decided yet regarding the 25th annual pink triangle," Carney wrote in an April 15 email to the B.A.R. "Possibly, yes, it will happen. There are still 10 weeks to go so conditions may later allow a small group to gather for a safe installation.

"If the 25th annual pink triangle is a 'go,' Ben Davis, the founder and chief visionary officer of Illuminate, has graciously come forward with an interest in lighting it," he wrote.

The pink triangle has been lit seven times before, but as Carney noted, "this time will be truly spectacular."

Illuminate does the lighting on the western span of the San Francisco-Oakland Bay Bridge.

(As the B.A.R. previously reported, Illuminate's plan for a similar art piece on the bandstand in Golden Gate Park was rejected by the city's historic preservation commission. However, the city's Park and Recreation Commission threw its support behind the lighted art piece and asked the historic preservation panel to reconsider. It has yet to do so. The "Hope" quote is widely attributed to Milk, though it is unclear when he first said it.)

"The conversation is still early and they are investigating so a decision can be made regarding lighting in the next week or so but we have had several Zoom calls to discuss it and brainstorm," Carney wrote. "I remain optimistic and am applying for the necessary permit today to have just in case everything comes together. Even without the parade, a gigantic pink triangle on Twin Peaks sends an uplifting message."

Summer, fall events in question
The AIDS Walk announced April 21 it is moving to a virtual format.

"We had an honest conversation about the problem of whether the COVID-19 situation would be different than it is right now and whether individuals would want to come together so soon after being in the midst of COVID-19 — gathering 10,000 people in Golden Gate Park on a Sunday would normally be good," Brett Andrews, a gay man who is CEO of PRC, which co-produces the AIDS Walk, said in a phone call with the B.A.R. April 21. "As a health and human services organization, keeping people safe is our priority."

Andrews said there will be other AIDS Walk online events, such as a nonprofit night (which has not as yet been scheduled) as well as a kick-off night at 5 p.m. May 28.

That said, Andrews stressed that the AIDS Walk website will be working the same as in the past — individuals and teams will be free to register and sponsors are encouraged to continue donations.

A representative of Silicon Valley Pride, which is scheduled for late August in downtown San Jose, told the B.A.R. April 20 that the organization that produces that event would have a statement the following day but did not provide any information at that time.

"At this moment, we are monitoring this situation and we are evaluating the need to postpone or to cancel future events leading up to and including our 45th annual Pride Parade and Festival 2020," the statement reads. "We will keep everyone posted."

A representative of Oakland Pride, which is scheduled for September 13, said that a decision won't be made until later in the year.

"Our team is monitoring the situation here in the Bay Area and the progress of our elected and health officials. We remain hopeful that we will be able to bring our LGBTQ community a great Oakland Pride 2020 and will ensure that Oakland Pride remains a healthy, safe, and community-driven event," Oakland Pride co-chair Carlos Uribe wrote to the B.A.R. in an April 21 email. "Currently, our board and staff are working toward that goal and we do not currently anticipate cancelling this year's event. If that decision has to be made, we will make that closer to September, in consideration of our community's needs and guidelines from local, state, and federal health officials."

Oakland Pride was in talks with City of Refuge Church in Oakland about the possibility of obtaining office space there, Uribe told the B.A.R. in February.

Uribe said April 21 that the organization may move there "once (shelter-in-place) restrictions are eased." Oakland Pride was recently able to obtain office space at East Bay for Everyone in downtown Oakland, near Lake Merritt.

Jenn Meyer, a straight ally who is the president of the board of directors for the Castro Street Fair, which annually occurs in October, wrote in an email to the B.A.R. April 22 that they would make a decision a couple of months out.

"We are currently waiting until around mid-July to evaluate the landscape but will of course abide by any public health directives that are released before then," Meyer stated.

SF, NYC Pride events subsumed into Global Pride
Pride events throughout the nation have been canceled due to the coronavirus outbreak, which at press time has killed upward of 40,000 Americans. New York City canceled its Pride March April 20. June Pride events are commemorations of the anniversary of the Stonewall uprising in the Big Apple, which sparked the modern LGBT rights movement in the United States.

Both New York and San Francisco's 2020 Pride festivities are going to be subsumed into InterPride's online 24-hour Global Pride scheduled for Saturday, June 27.

Global Pride will be available on multiple platforms and will celebrate the LGBT movement around the world, time zone by time zone.