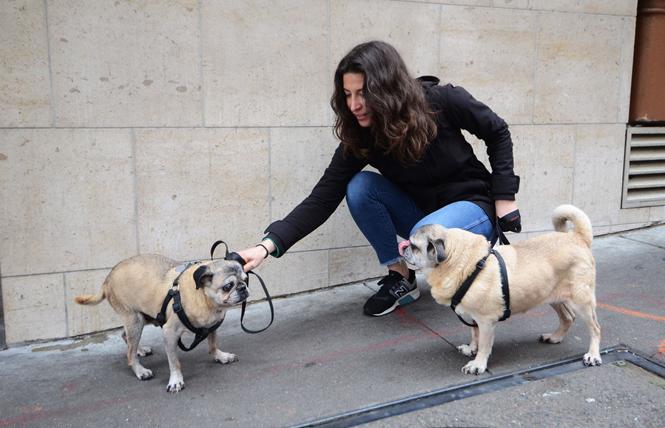 For Park Merced resident Thomas Francis Jones the program Pets Are Wonderful Support has been a godsend for nearly two decades. Over the years PAWS, as it is known, has helped him care for his beloved late cat Astro and his two dogs Petey and Klay.

PAWS helps cover the dogs' medical care and provides Jones 30 days worth of food for them each month. A longtime HIV survivor, diagnosed in 1990, Jones would be unable to financially care for his pets if it weren't for the aid he receives from the nonprofit program.

In addition to the vet care and food he receives through PAWS for his two pugs, Bernie, 14, and Juanito, 11, Tenderloin resident Stephen Eisland also relies on the program's volunteer dog walkers to help him get his pooches out of the house for daily walks. Eisland, 78, a gay man who is single, suffers from sciatica and finds it difficult to walk long distances.

"Thank god for PAWS," said Eisland, a client for more than a decade, after adopting his first set of pugs, Bailey and Foster, on the advice of his doctor. "It is a fantastic organization. They really have done everything to make life easier for me."

With many nonprofits moving their services to virtual platforms due to the stay-at-home orders issued as an attempt to halt the spread of the novel coronavirus, that wasn't an option for PAWS. Now part of the nonprofit Shanti Project, the 33-year-old aid program for pet owners in the city made the decision to keep its services ongoing through the pandemic.

"It has certainly changed a lot of what we do, but we have worked very hard to ensure no essential services are being stopped for any of the PAWS clients," Executive Director Kaushik Roy told the Bay Area Reporter in a phone interview from his home in Petaluma, where he has been working remotely while sheltering in place with his wife, their 5-year-old daughter, and the family's dog.

As the B.A.R. has previously reported, pets are an especially vital source of emotional support for LGBT seniors who often live alone and are isolated from their families. Dogs, in particular, help get their owners out of the house to socialize and exercise.

"Especially now that none of us can go beyond our houses," noted Roy, "the power of a pet is really helping our folks."

The one cutback PAWS had to make was suspending its free dog washing for client's canine charges.

"It is not possible with the protocols," Roy explained. "It is not as essential as some of the other services we provide."

One expansion the agency was able to undertake, said Roy, was teaming with the mobile pet care service Full Belly Bus to provide free pet food to homeless and marginally housed people in the Tenderloin. All PAWS staff and its upward of 700 volunteers were instructed to adhere to the new safety protocols health officials have instituted due to the pandemic, such as remaining six feet away from people, wearing masks, and using hand sanitizer.

Of upmost importance was continuing to deliver pet food for the roughly 800 pets, mainly dogs and cats, owned by PAWS' 600 clients. Also provided is cat litter for those with feline companions.

The agency had to suspend its Saturday pickups for its 175 clients who normally would be able to drop by on their own to get their pet supplies. They are now receiving deliveries.

"The biggest issue we had to address was the vast majority of our clients rely on us for pet food," said Roy. "Unless you have a pet, you may not understand that the pet food issue is also a human food insecurity issue. What a lot of folks do, and why PAWS got started during the crisis years of the AIDS epidemic 33 years ago, is people will feed their pets instead of themselves. We want to make sure we are continuing all food drop off for all of our homebound clients." 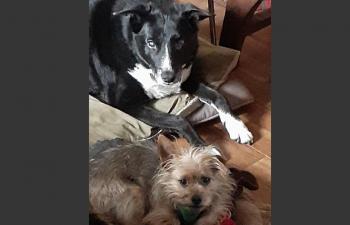 How those deliveries are done has changed, however, with clients receiving a phone call to let them know their pet food is at their front door. The delivery people will then wait to make sure it is picked up before moving on to their next stop.

"We have insisted volunteers not go into people's homes right now," said Roy.

PAWS costs roughly $1 million per fiscal year for Shanti to run, and its biggest fundraiser for the program is scheduled for June 4. Called Petchitecture as it features designer dog houses and other pet habitats for auction, the agency has yet to decide what changes it needs to make to the event in light of the pandemic.

"We have not made a final decision, but the more I hear, it is highly unlikely we will have it on June 4, unfortunately," said Roy. "In terms of how that impacts the PAWS funding, we are not sure. It is too soon for a lot of nonprofits to know how donors and funders are going to respond, not just in the moment but over the next six to 12 months."

In the meantime, Shanti has teamed with San Francisco officials to coordinate volunteer opportunities during the health crisis via the website http://www.shanti.org/cerv

One of the options for the 400 people who have already signed up is to provide dog walks, and because they do need to go inside people's homes to pick up the dogs, the volunteers are instructed to cover their face with a mask, scarf, or bandanna.

"Those who can take the precautions and are comfortable are doing the dog walks. It is another important one, because if you are a homebound client, your dog still needs to go out," said Roy.

"For me, it is important. I know Steve really does struggle with taking his dogs out for longer walks," said Sinch, who works for Berkeley-based pet food company Wild Earth. "Giving him insurance he can rely on someone is really important in a time like this."

One of several volunteer dog walkers assisting Eisland, she usually takes Juanito out Saturday mornings for a 20-minute walk as Bernie oftentimes won't go out.

"I come in and grab the dog and when I drop them off, we usually chat a good 15, 20 minutes," she said. "This last time, we talked from different rooms and for a shorter time."

Sinch hopes people will continue to volunteer and financially support PAWS as it is providing critical services to its clients.

"Honestly, for me, it brings me a lot of joy and helps with my mental health to be able to focus on something else," she said. "It puts things in perspective."

Eisland, who lost his right eye after being shot during a homophobic attack in the mid-1980s when he lived in New Hampshire, has survived five heart attacks and prostate cancer. His boys, as he refers to his dogs, are his children, and if it weren't for PAWS and its volunteers, he wouldn't be able to care for them.

"You can't say enough about how good they are. I wish they would get more volunteers and more people financially helping out," said Eisland, who praised his volunteers for continuing to help him and his dogs. "I was concerned. I wasn't sure if my walkers would leave me for their own welfare."

To learn more about PAWS, or to sign up as a client or volunteer, visit its website at http://www.shanti.org/programs-services/pets-are-wonderful-support/