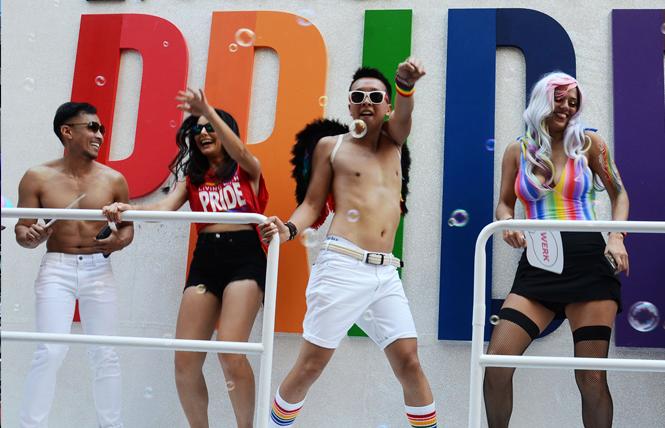 A group of LGBT nightlife and business figures issued an open letter to San Francisco Pride officials and city leaders April 9, asking that the event be postponed to the fall in light of the novel coronavirus outbreak, instead of occurring entirely online in June.

Cecil Russell, a gay man who is the head of Cecil Russell Presents and Gloss magazine, told the Bay Area Reporter by phone April 9 that the letter would be addressed to Mayor London Breed, the San Francisco Board of Supervisors, gay state Senator Scott Wiener (D-San Francisco), and the San Francisco LGBT Pride Celebration Committee Board of Directors.

This year's 50th San Francisco Pride celebration is scheduled for June 27-28. Responding to the letter, public officials said it was too early to determine if fall would be a good time to hold a Pride parade and festival from a public health perspective, although they left the door open to that possibility.

"We are all going through a horrific tragedy and we need hope," Russell said. "We're going to tell them to postpone. It's the right thing to do. We need something in front of us to say we've made it."

Russell said that delaying the event to the fall would help the LGBT economy recover from the effects of the shelter-in-place orders issued to combat the spread of the novel coronavirus, which have left LGBT neighborhoods nationwide, such as the Castro, shuttered.

Of an online-only Pride celebration, Russell said "that's not Pride for us."

A draft version of the letter obtained by the B.A.R. makes roughly the same case.

"Changing the format to digital-only or creatively trying to celebrate while excluding public gatherings and events is injustice to the entire community," it states. "Events and gatherings can be postponed to the best possible future date, such as an October or November timeframe. It gives all of us six months to process where we are today and where we need to be while giving San Francisco and its community time to thrive as an immediate and tangible financial boost which all the residents and businesses of San Francisco need and deserve."

The open letter comes just days after SF Pride Executive Director Fred Lopez wrote in a Facebook post April 7 that this year's celebration would "look very different from the two-day celebration that we initially envisioned."

Lopez had said "all options were on the table," but SF Pride leaders have not been publicly specific about what changes they are considering.

Lopez gave the B.A.R. a mid-April timeframe for when SF Pride would be making a decision about what to do going forward. A reporter for KGO-TV, the San Francisco ABC affiliate, stated April 8 that a decision from Pride is expected by next week.

A few hours before that broadcast, Breed said at a news conference that it is unlikely SF Pride will be able to go forward as originally planned.

"It may not be possible to expect that we can launch a large-scale event with millions of people descending on San Francisco," Breed said during an April 8 news conference. "I'm not sure that will be possible."

These statements from Lopez, Wysinger, and Breed came after the B.A.R. reported April 6 both growing community pressure for SF Pride to postpone and broke the news that SF Pride was meeting with city officials to discuss next steps. As late as April 3, city officials were planning for the parade and festival — which boasts an attendance of one million people — to take place at its traditional time in late June.

But some leaders are wary of that timeline.

For example, gay District 8 Supervisor Rafael Mandelman told the B.A.R. April 3 that "Honestly, it is hard to imagine Pride coming together in its traditional form less than three months from now. Ultimately, public health will dictate whether and in what form this year's Pride celebration can occur."

The open letter was joined by longtime events promoter Gus Bean, and the owners of Q Bar, Blackbird, Detour, and 1015 Folsom. Bean did not immediately respond to a request for comment at press time.

Russell said that the open letter may become a petition soon.

Wiener and Mandelman told the B.A.R. that it is too early to decide whether a large gathering later in 2020 would be appropriate.

"It would be fantastic to have a full Pride celebration this fall. Obviously before that decision can be made, we need to know exactly where we are with the pandemic," Wiener wrote. "As much as all of us — no one more than me — want to see a full Pride celebration happen, we also need to ensure we don't reignite the spread of coronavirus. Right now, we don't have enough information to make that decision. At some point, however, we will have enough information."

"We have been talking to Pride leadership as they navigate a challenging set of decisions around this year's events," Mandelman wrote. "I certainly understand and share the desire to save space for an in-person Pride celebration later in the year. At the same time, I think it's worth noting that there is no certainty about whether large gatherings will be allowed at any point before 2021. Public health guidance is evolving and we simply do not know what will or will not be possible in the months to come."

"The mayor wants nothing more than to celebrate Pride with the entire community, but the reality is that we don't know what the future holds," Breed spokesman Jeff Cretan said. "We will continue to rely on the guidance of our public health officials as we have from the beginning of this pandemic, and we will work with SF Pride and the community to determine how best to move forward through these unprecedented times."

Lopez and Wysinger have not responded to a request for comment.

Updated, April 9 at 8:22 p.m.: This story has been updated to include new comments from the mayor's office, Wiener, Mandelman, and Russell.