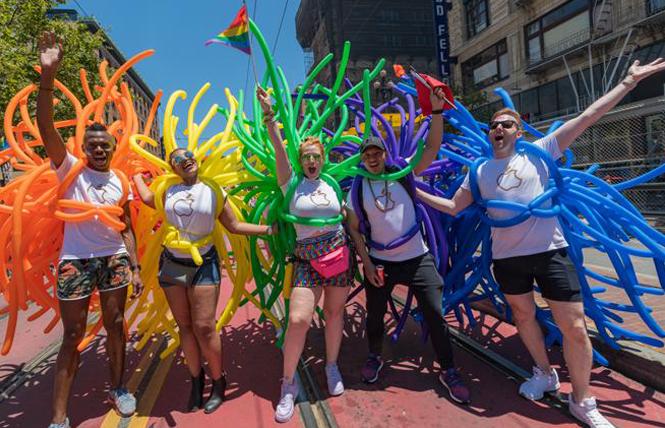 San Francisco Pride is working with City Hall to make major changes to the 50th annual parade and festival, which is scheduled for June 27-28, in light of the novel coronavirus outbreak.

"It is apparent that SF Pride will look very different from the two-day celebration that we initially envisioned, and we continue to work closely with our partners at City Hall to evaluate all available options," SF Pride Executive Director Fred Lopez wrote in a Facebook post April 7.

Lopez added that the organizing committee for the largest LGBT Pride celebration on the West Coast anticipates "being able to share what we've learned very soon."

The acknowledgement that this year's two-day celebration and parade would not go off as planned came a day after the Bay Area Reporter reported Monday that SF Pride is facing growing pressure to postpone the event and that a meeting was planned this week between city officials and the organizers of not only the annual Pride celebration but also the Trans and Dyke marches.

As other media outlets picked up on the story Tuesday, and organizers of Boston's Pride scrapped their celebration in early June, calls for changes in San Francisco Pride's golden anniversary only grew louder.

In his Facebook post, Lopez alluded to the internal debate SF Pride officials are having on how to mark the event's milestone year while also taking into consideration the need to protect the health of participants and attendees. The event draws hundreds of thousands of people from across the Bay Area, California, and around the country.

"We know that many people want to see a commemoration of Pride50, and we also hold the safety and well-being of our LGBTQ+ communities at the highest priority," wrote Lopez. "The global Pride network is responding in unique and creative ways to the challenge of physical distancing, and SF Pride plans to be a part of those efforts while developing some new plans of our own."

San Francisco Mayor London Breed said Wednesday that it is unlikely Pride will be able to go forward as originally planned.

"It may not be possible to expect that we can launch a large scale event with millions of people descending on San Francisco," Breed said in an April 8 news conference. "I'm not sure that will be possible."

Carolyn Wysinger, the president of SF Pride's board of directors, told KGO-TV that "all options are on the table" in an April 8 interview on that station's evening newscast.

"We see so many things in this situation changing every day," Wysinger said.

A KGO-TV correspondent said that final decisions are expected by next week.

The shelter-in-place orders in seven Bay Area counties (including San Francisco), designed to halt the spread of the new coronavirus are currently scheduled to remain in place through May 3, though schools around the state will not be reopening this academic year. The statewide order for people to remain home and non-essential businesses to close, from the desk of Governor Gavin Newsom, has no expiration date.

"Honestly, it is hard to imagine Pride coming together in its traditional form less than three months from now," gay District 8 Supervisor Rafael Mandelman told the Bay Area Reporter on April 3. "Ultimately, public health will dictate whether and in what form this year's Pride celebration can occur."

Nicky "Tita Aida" Calma, one of the organizers of the Trans March, which traditionally takes place the Friday of Pride weekend, stated that there would be a meeting this week to discuss next steps.

But as late as April 3, the San Francisco Municipal Transportation Agency was planning for Pride 2020 — the annual commemoration of the Stonewall Riots that sparked the modern LGBT rights movement in the United States — to proceed as normally scheduled.

"Right now, we are still processing requests and permits past the period of shelter-at-home," Nick Chapman, a manager with the SFMTA (which deals with the street closures associated with SF Pride and other major civic events), told the B.A.R. by phone April 3. "But everyone is aware the situation could change; new orders could come into play."

As the B.A.R. previously reported, Pride celebrations have been postponed in Los Angeles, Long Beach, Santa Cruz, and Sonoma County. New York City Pride, which is scheduled for the same dates as its San Francisco counterpart, was slated to go on as scheduled at press time. New York City currently has the largest novel coronavirus outbreak in the U.S.

Lopez had said the situation would be clear "by about mid-April." But some want a decision now.

Ken Jones, who had been the first African American chair of SF Pride's board of directors, wrote in a Facebook post that he would be "very disappointed if it came to that," in terms of postponing the Pride parade but added that the board members "will debate the issue more fully."

Updated: 4/9/20: This article was updated to include comments from the mayor and SF Pride board president.