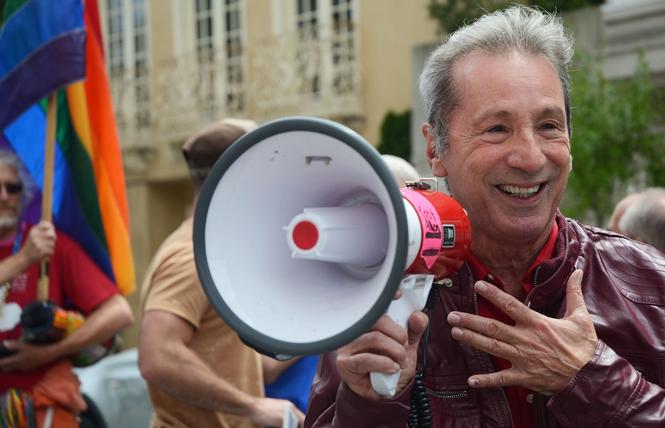 Seated at his kitchen table, gay political leader and comedian Tom Ammiano began to recount his life story in July 2018 to journalist Tim Redmond and Jon Golinger, a political consultant and author. By the time the trio had finished, they had amassed 30 hours of recorded conversations from 13 two-hour sessions.

The reminiscing was both bittersweet and uproarious, recalled Ammiano, 78, during a joint phone interview with Golinger April 1 while he sheltered at home with his husband, Carolis Deal, due to the novel coronavirus outbreak.

"It was a little bit of everything. Some of the memories are very emotional," said Ammiano, a New Jersey native raised Catholic who moved west in the early 1960s when he enrolled at San Francisco State University to earn a master's degree in special education. "Expressing it verbally could for me be very powerful, but we did have a lot of laughs. It was very positive."

The transcripts were then turned into a memoir jointly pieced together by the three progressive stalwarts of the city's political scene. The process took a bit longer than expected because some of the taped conversations were inaudible, said Golinger.

"As I transcribed the recordings, numerous times I couldn't hear super clearly because there was too much laughter. Mostly Tim and I laughing through much of it," recalled Golinger. "It made it more challenging but much more fun. I hope that comes through in the writing."

The fruit of their collaboration, Ammiano's "Kiss My Gay Ass: My trip down the Yellow Brick Road through activism, stand-up, and politics," will officially be released Thursday, April 9, by Redmond's Bay Guardian Books. Printed in softcover, the book costs $20, and an excerpt will run in the Bay Area Reporter's April 16 edition.

"This is all bittersweet," Ammiano told the B.A.R. in his first media interview about his memoir. "I am excited by the book being ready, but the timing is very sobering."

The 240-page book has been a long time coming. In 2013, a year prior to his political career being cut short by term limits, Ammiano had told the B.A.R. he planned to write a memoir. He promised it would retell, "the journey I have been on in this city. San Francisco has been tremendously supportive."

Overshadowed at times by the city's first out elected official, Harvey Milk, who was killed in 1978 11 months into his first term as a supervisor, Ammiano was just as much a gay trailblazer in the city's politics. A contemporary of Milk, Ammiano became the first public schoolteacher in the city to come out of the closet in 1975.

He worked alongside Milk and other LGBT activists in 1978 to defeat the anti-gay Briggs initiative, which would have banned LGBT people and their straight allies from working as schoolteachers in the state. It was only days after that victory that Milk was assassinated inside City Hall along with then-mayor George Moscone.

Twelve years later Ammiano entered into political office by winning a seat on the San Francisco school board and served as its first gay president. In 1994, he won a seat on the Board of Supervisors, though his victory came a few days after his longtime partner, Tim Curbo, died due to AIDS complications.

He twice ran unsuccessfully for mayor, first as a write-in candidate in 1999 who forced then-mayor Willie Brown into a runoff. Ammiano then lost in 2003 to fellow supervisor Gavin Newsom, now California's governor.

Ammiano's election in 2008 to the state Assembly marked the first time an out gay father served in the Legislature. He has a daughter, Annie Jupiter-Jones, with couple Diane Jones and former Health Commissioner Roma Guy, and three granddaughters now 18, 13, and 8 years old.

Throughout his political career, Ammiano made deft use of his comedic chops. The title of his memoir comes from his retort to Republican former Governor Arnold Schwarzenegger who made a surprise visit in 2009 to a fundraiser for the San Francisco Democratic Party. At the time, Ammiano was upset that the governor vetoed his bill aimed at protecting LGBT state prisoners and another bill focused on updating the gender of transgender individuals on their birth certificates.

Unlike the "fuck you" response Schwarzenegger hid in a veto message that fall of another of his bills, Ammiano told the B.A.R. he didn't slip a secret profane reply in his book for the governor, who does get name-checked in one of the chapter titles.

Former mayor and current Senator Dianne Feinstein (D-California) is also featured in a chapter title. It derives from a joke Ammiano would often tell during his standup routines.

"Dianne always makes good copy, let's leave it at that," said Ammiano when asked if she will like how he portrayed her.

The book, Ammiano said, settles a few personal scores, corrects what he felt were inaccuracies in other chronicles of city history, and includes some juicy gossip such as what happened when he met a handsome soldier on the Greyhound bus he took to San Francisco.

"History is made up of many interpretations. I thought rather than just complain at least put my two cents in," he said. "Let the chips fall where they may."

Some people may be surprised to find their names were left out entirely.

"I think we balanced it very smartly," said Ammiano. "Sometimes we, rather than mention someone, we left them out. But we described it so when you read it, you will understand who we meant."

Golinger, whose 2017 book "Saving San Francisco's Heart: How to win elections, reclaim our city, and keep SF a special place" was also published by Bay Guardian Books, told the B.A.R. that he encouraged Ammiano to go with his famous quote for the title of the book.

"It merges three pieces of Tom: his sharp elbows as a political activist with his hilarious stand-up comedy and his big heart. He was being real in that moment with Schwarzenegger," he said. "It was a real, raw, uncalculated or planned moment that was genuine. Tom is honest, sometimes bluntly so, but he is also hilarious, completely truthful and genuine."

In his author's note for the book, Ammiano references his having dyed his hair blue for several years now. It is the color of "Mary," he notes, adding the quip "Camp rules," from the late gay San Francisco drag queen and first known out person to run for office Jose Sarria.

"It is one of my favorite lines from Jose and very apt today," said Ammiano, noting his hair currently is "a mess" since he can't see his stylist. "When things are pretty down, Jose used to say, 'I get up every morning and I look at the mirror and I say good morning, Mary!'"

In these perilous times, Ammiano and his collaborators hope his memoir will bring some hilarity and levity to readers.

"Finding ways to laugh and be true to yourself, I think we need that more than ever now," said Golinger.

As for their taped conversations, Ammiano plans to donate them to an LGBT historical archive.

To order a copy of the book, visit https://www.kissmygayass.com/