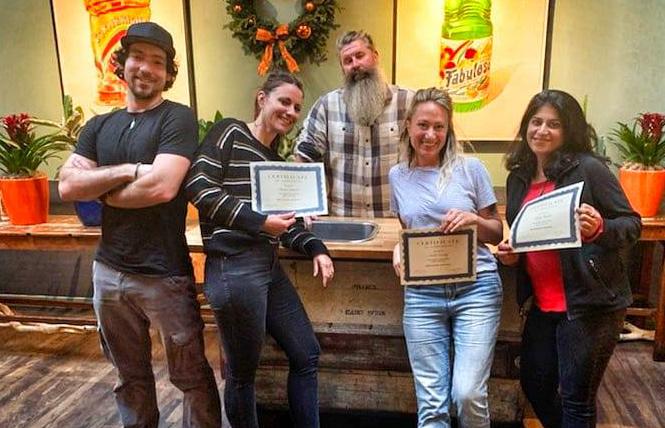 From an early age Dino Medardo Rosso had an ability to master foreign languages, first learning Spanish in kindergarten. It prepared him to converse with his adopted brother from El Salvador.

To date Rosso has studied roughly 17 languages and is fluent in English, Spanish, Italian, French, Portuguese, and Arabic. He graduated University of Massachusetts Amherst with degrees in Spanish, Portuguese, Latin American studies and in theater, ballet, and opera; Rosso then graduated from the School for International Training in Brattleboro, Vermont with a degree in Arabic, French, and education.

"The more languages you learn, the easier it becomes because you recognize the patterns," said Rosso, who spoke with the Bay Area Reporter this month via Zoom.

Rosso, 42, whose Twitter profile describes him as a professor, polyglot, and pirate, spent most of his 20s in Europe, working as a fit model for Dolce & Gabbana in Italy and as a tour guide in Norway, Spain, and Romania. He moved to San Francisco 10 years ago and landed a job teaching foreign languages at the private San Francisco Waldorf School.

The gay Castro resident three years ago launched his own business, Lingo, to teach others foreign languages. In particular, Rosso trains restaurant managers how to communicate with their mostly Spanish-speaking staff and in turn teaches English to the cooks, chefs, and other back-of-the-house employees. He also provides individual sessions for people wanting to learn a language ahead of a vacation or business relocation to a foreign country, or to communicate with the family of their foreign-born partner or spouse.

On an average week he sees a dozen students mostly learning Spanish, charging $75 an hour for adults and $100 for youth. As demand has grown, Rosso hired three other instructors.

It all came to a crashing halt last month when the novel coronavirus outbreak led his high school to shutter its campus, the city's restaurants to close their dining rooms, and most people to sequester at home for the time being.

"When the whole thing happened, overnight I lost 20-plus private students and a whole host of restaurants," said Rosso, who spent a week eating ice cream and watching "Golden Girls" episodes alone at home before resorting to online platforms to relaunch his business. "People are starting to come back now. I am doing it all on Zoom; some people prefer Facetime but Zoom seems to be the best way."

He has started back with some of his restaurant clients and is building up a reputation with families in China who are hiring him to teach their children Spanish.

"I have five high school students right now in China. If they are up and it is 2 in the morning here, I am teaching," said Rosso, who is learning Mandarin from a Waldorf colleague.

Utmost for Rosso was reviving his free, weekly Spanish classes for first responders and health care workers in the city, especially now that they are dealing with a serious public health crisis.

"What I am doing with them is helping them help the community," explained Rosso. "It is open to any city employees who are emergency personnel. It is for anyone who has contact with the Spanish-speaking community and wants to learn how to communicate with them."

The relationship with the city's fire department and other emergency departments and health care providers began with a chance encounter at the 2018 Castro Street Fair between Rosso and Jonathan Baxter, a 21-year fire department employee. Rosso had ventured over to the annual fall festival to make contacts with the different groups that had booths at the fair.

He struck up a conversation with Baxter at the fire department's booth and learned the agency had long talked about providing language classes to its employees so they could communicate better with the general public. Most needed was Spanish, as many people they treat only speak Spanish.

"Coincidentally, we were working on how to bring programs into public safety, not just for the fire department but for all public safety and health care providers, so we can get individuals at a bare minimum to communicate with people who are experiencing likely the worst moment of their life when they call 911," said Baxter, 48, a lieutenant overseeing homeland security operations and public information for the fire department.

The classes launched last summer Rosso used as a pilot to better understand what was needed. He also spent 15 hours riding in an ambulance on New Year's Eve to see firsthand what emergency responders face on the job.

"I had to see things from the point of view of a firefighter," explained Rosso. "Most people think they exist to put out fires and 10% of their time is spent doing that. But 90% of their job is responding when you call 911 because someone has had a heart attack or overdoses or got stabbed in a bar fight. They are the ones who show up."

For those safety personnel unable to speak Spanish, they either would call a phone translation service for assistance or use a phone app. But both resources have drawbacks, noted Baxter, whether in wasting precious seconds or resulting in translation errors.

Some emergency responders pay to attend costly language courses, but Baxter said they are not geared toward teaching how to speak with people during a time of crisis.

"I was averaging $7,000 to $8,000 a year on Spanish lessons. That is expensive, especially trying to live on a public servant salary," said Baxter. "Those classes are structured for your building from zero to be a proficient Spanish speaker. We want a program where we can learn how to speak and communicate right now to help minimize suffering and save lives then build on it."

"Dino is able to bring an innovative approach to educating first responders and our health care providers how to communicate and learn Spanish," said Baxter. "You get a lot of people who have different learning abilities, but they want or their desire is to speak that language. Or at a bare minimum get basic information to get help to the person who needs it."

The hourlong classes began after Rosso's employer offered use of one of its classrooms so the emergency responders would have a safe and private space to learn and practice their Spanish. Upward of 20 people attend the weekly Friday classes, which Rosso this year had held at the Ingleside police station. He spends 30 minutes on lessons and the students have 30 minutes to practice speaking.

While Rosso isn't charging for his services, attendees often donate him some money for his time. Last year, he received a mayoral award of excellence for the program and this year received a Guardians of the City award from the fire commission.

He conducted his first online course Friday, March 27, and geared it toward teaching phrases and terms specific to the coronavirus outbreak and how to talk to people about COVID-19, the respiratory illness caused by the virus.

"Dino focuses on what phrases do we need to help patients out, so whether it is the police, firefighters, or nurses, he is very attune to what kinds of phrases we use," said Pacific resident Serina Maali, 27, who became a licensed nurse in February and started taking Rosso's classes in January after learning about them via a Facebook post. "Instead of learning basic Spanish 101, we are learning a lot of phrases we can use and that is very helpful."

While sheltered at home with her three children and looking for a nursing job, Maali is logging into Rosso's virtual classes. She took Spanish in high school but isn't proficient in the language and wants to be able to speak with her patients without needing to use a translator.

"In nursing school I was exposed to many Spanish-speaking patients who only spoke Spanish. I was able to use a translator, but it is not the same as being able to speak in the native tongue of somebody else and to give them that comfort," said Maali, adding that Rosso's "enthusiasm and passion for teaching" makes him an excellent linguist. "He just really cares at the end of the day and will do whatever it takes to help a student out."

Already, regular attendees of the free class are becoming more proficient in speaking Spanish, said Baxter, with several wanting to also write in the language. The hope is to expand into other languages commonly spoken by San Francisco residents, such as Mandarin, Cantonese, Vietnamese, Russian, and Tagalog.

"He is helping us break through the barriers we have," said Baxter, who recounted giving directions last December to a car full of tourists from Spain who happened to pull up alongside his fire department vehicle. "I responded immediately in Spanish, and they pulled off. But then I was worried I had told them to go the wrong way, so I called Dino and he said I had told them to go the right way."

Castro website plugs open businesses
To help its members while much of San Francisco shelters in place, the Castro Merchants business association is using its website to promote which businesses in the neighborhood continue to be open.

As of Tuesday, April 7, there were more than 50 eateries listed on the http://www.castromerchants.com main page that were offering takeout or delivery or both in some cases. The site also lists those neighborhood grocery stores and other shops that continue to be open, as well as several retailers accepting orders online and other businesses that continue to offer their services to customers.

"We started with restaurants, listed by food category, and will be updating other categories soon," noted Dave Karraker, with MX3 Fitness, which has closed its Market Street location but is providing livestreamed workouts online. "We think this is a great way for residents to easily see a way to help local small businesses by ordering delivery or take out."