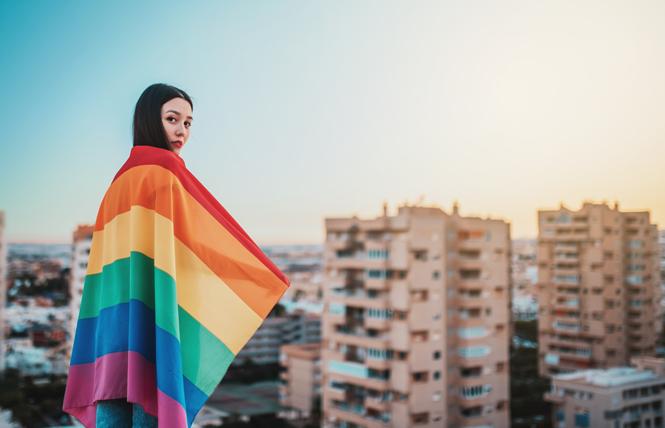 LGBT Asians around the world are fighting back in the face of coronavirus-inspired racist attacks against Asians.

"Obviously, there has always been racism toward the Asian community, but we've never seen anything that has been so quick and so globally widespread as this," Amazin LeThi, founder of the Amazin LeThi Foundation, told the Bay Area Reporter from Europe, where she was sheltering in place


"Sometimes it just feels like they just consider the whole continent of Asia China," the American-raised Vietnamese LGBT activist, Stonewall UK and Athlete Ally ambassador, and athlete added. "They just see an Asian person and because the coronavirus came from Asia, we are all part of the problem."

LeThi is a member of the rainbow community. She declined to disclose her age.

"It's alarming in a way and it's kind of weird, right?" said Gerald Esguerra, who is the head of the Filipino LGBT Europe's Out&Proud Advocacy Committee in Amsterdam. "We lost humanity. It doesn't necessarily mean that if you're Asian you are carrying the virus."

LeThi added, "The coronavirus may have come from China, but in terms of how it's being spread across the world, it's everyone. It's a global virus."

Each one of the queer Asians who spoke with the B.A.R. has been on the receiving end of racism since the outbreak of the novel coronavirus that causes COVID-19, a respiratory illness.

As of April 7, there were nearly 1.4 million people around the world infected with the virus. The United States surpassed Italy, Spain, and China as the nation with the highest number of cases.

The incidents of anti-Asian sentiment the activists experienced have mostly consisted of snide comments or jokes, stares, and people moving away from them in public or online. Some were denied entry into a club.

None of the activists experienced or know someone who has been spat on, yelled at, or hit in the street, like some incidents that have been reported.

The activists are just as concerned about the current attacks on their community as they are about the residual anti-Asian bias that likely will linger long after the virus has been contained and people return to their normal lives.

At the same time, they are grappling with their own fears while attempting to take care of their communities.

The spread of hate
Fueling the spread of the anti-Asian sentiment are racist world leaders, such as President Donald Trump, who has denied that his repeated description of coronavirus as the "Chinese virus" has real world consequences.

"It doesn't help when the Trump administration [is] calling it the 'Chinese virus' or the 'Kung-Flu' virus and officially wanting to blame China for it," said LeThi. (An unnamed White House official used the "Kung-Flu" reference, the Daily Beast reported.)

"When you give a disease an ethnicity, then you are opening the door to racism and xenophobia," LeThi continued, frustrated that more government leaders around the world aren't speaking out against the attacks.

Peter Chuang, a gay Taiwanese Australian in Melbourne, called out his country's media for negative news stories about China.

"I think that the media here is implicitly biased against China," Chuang, 38, said. "I would say probably about 90% of them are negative. People keep reading these articles and forming opinions about China and Chinese people."

Trump's repeated use of derogatory statements toward China and the coronavirus have been heard in the Netherlands.

The country has been very welcoming of Asians. However, following Trump's racist statements, Esguerra, a 36-year-old gay American man living in Amsterdam, has noticed a change in Dutch attitudes toward Asians.

"It became more limited actually," he said about his freedom of movement in the society. "Not directly [that] people tried to discriminate in some way, but you could feel it."

He felt the racism more strongly while traveling with two of his friends, one of whom is Chinese, through Europe just as the virus was beginning to spread through Italy.

He said people were "trying to avoid you" or their behavior indicated "they were kind of scared of you."

In Belgium, August Mateo, a 45-year-old gay Filipino man who is the local coordinator of Filipino LGBT Europe, and his friends were denied entrance into a nightclub they frequented before the country's stay-at-home orders were issued.

"We were shocked" and "confused," said Mateo, until he overheard staff behind the doorman say, "Oh, they are from China, they are like, maybe they have coronavirus."

Overhearing the comments made him angry and frustrated, but he didn't want to make a scene, he said, so he and his friends went to another club.

Then it happened again later that evening. This time it was while he and his friends were in line with two straight couples at an afterhours snack shack to get food.

The couples were speaking Spanish, so they couldn't understand what was being said, but they heard "China" and "virus," he said, and then one of the men coughed near him. The couples laughed.

Chuang said that he was helping a patient in his Melbourne dental office when the patient joked if he had coronavirus.

"It was meant to be light-hearted, but obviously it didn't feel that way for me," said Chuang.

Michael B.C. Rivera, Ph.D., a Hong Kong-born bioanthropologist based in the Hague in the Netherlands, experienced it recently.

Rivera's friendly hello to another Grindr user was greeted with a quick "bye" and "coronavirus" comment, Pink News reported.

Rivera reported the user, but the incident still stung.

"Racist behavior is not uncommon within the LGBT community or on gay social networks," wrote Alex Garner, Hornet's senior health innovation strategist. "With coronavirus we find ourselves at an intersection of racism and disease-related stigma. Two issues the LGBT community has been struggling with for decades."

Hornet has worked to "foster an environment that is affirming and empowering to all members of our community regardless of ethnicity, gender expression, age, and HIV status," said Garner.

"Eradicating racism and other forms of discrimination remain a top priority for us on a global scale," added Grindr's unnamed spokesperson.

Chuang said that he is considering limiting his movement to safe spaces due to rising anti-Asian sentiment in Australia.

"It makes me feel unsafe. It makes me feel like I have to be a bit more wary about where I go [and] who I go with," said Chuang. "I'm going to be at risk [for] being racially abused, so it definitely heightens that fear."

To combat racism and provide a sense of security to the community, LGBT Asian and ally organizations are mobilizing virtual support systems and speaking out.

"Social distancing and rise in anti-Asian violence have left the LGBTQ+ API [community] disproportionately vulnerable and our community is hurting," Glenn D. Magpantay, executive director of the National Queer Asian Pacific Islander Alliance, wrote in a statement to the B.A.R.

In response, the alliance has launched a "series of virtual community sessions" to support local LGBT Asian community's needs, Magpantay said. "The online course includes skill building and support groups and is working hard to support our community leaders who are supporting their communities," he explained.

In the Netherlands, Esguerra said that he is also working on virtual programs to support queer Filipinos in Europe and in the Philippines.

In Italy, there's been a lack of media attention to the issue, said Fabrizio Marrazzo, the 43-year-old gay founder of the country's Gay Center and Gay Help Line based in Rome, so the center is being proactive.

Despite the hotline not receiving any calls from queer Asians regarding coronavirus-related racism, the center launched a digital media public awareness campaign and participated in an Action Week Against Racism promoted by the National Anti-Discrimination Office, he told the B.A.R. in an email interview.

Education
Current efforts are good, but the activists are also concerned about the long-term effects of coronavirus-inspired racism.

"The coronavirus may disappear or flatten off, but the racism and xenophobia toward our community has risen and will remain after," said LeThi.

"We actually need to look beyond the virus when it dies out: What will that look like for the Asian community?" she asked.

LGBT Asians aren't willing to suffer in silence. Instead, the activists noted, education is the key.

"The only way that we can win this is through proper education and information dissemination to people," said Esguerra.

"We just have to speak out," Mateo added. "We are not the cause of this virus."

Updated: 4/13/20: This article was updated to clarify Amazin LeThi's affiliations.