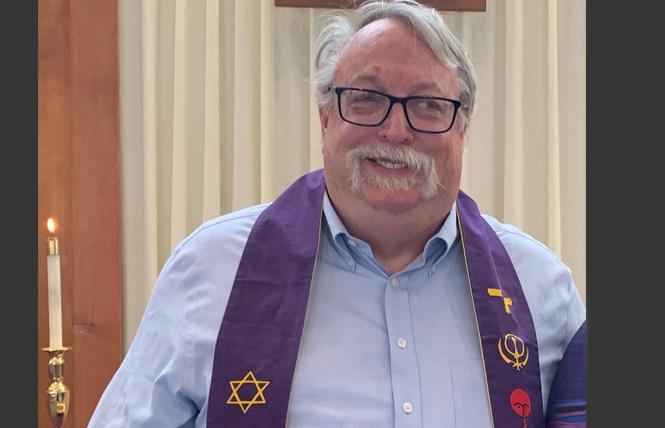 This Sunday is Easter, typically the most joyous day of the church year for Christians. People in my spiritual tradition gather even when they don't typically attend church. Sometimes they sport new clothing, hats, or suits. The mood is festive. In our part of the world Easter is also associated with the end of winter. Flowers abound, trumpets join with organs and choirs and the word Alleluia is repeated in the hymns and anthems, all of which celebrate new life, the power of resurrection. We tell the story of Jesus, a wrongfully convicted criminal executed by the Roman authorities in occupied Palestine/Israel, cruelly executed without due process in an act of capital punishment as egregious as those depicted in the current film "Just Mercy," based on Bryan Stevenson's memoir chronicling the racial injustice of the death penalty in the United States. We celebrate that the power of the revolution initiated by Jesus and his followers cannot be contained even by death. Our favorite songs recall how the power of sacred memory makes it possible not only for Jesus but also by implication all of our departed loved ones, "to walk with me and talk with me" in a perpetual garden where "the joys we share as we tarry there, none other has ever known." Whether or not it can be sustained by reason, this story is fed by faith and generally it works to inspire us to live a larger life and a more hope-filled existence.

For 15 years, from the mid-1980s and throughout the 1990s, I was the pastor of Metropolitan Community Church of San Francisco, an LGBT church in San Francisco's Castro district, during the terrible AIDS epidemic. The congregation has since relocated but the building is still there and the sidewalk is etched with memorials from that period where, in a city that lost over 20,000 people, a community once thrived where the principal sustaining belief was "Love Is Stronger Than Death." We endured presidents Ronald Reagan and George H.W. Bush (as awful in their time as Donald Trump) and terrible religious bigotry that described our situation as God's punishment. We overcame social stigma and lived for many years without significant medical relief and still, as best we could, we ensured that no one died alone. We became family for each other, a web of friends and lovers and ex-lovers and we were defiant and angry and proud. We invented a new kind of gay activism that lesbian feminist poet Adrienne Rich described as an "anger laced with mourning." Usually this time of year researchers and scholars of the period contact me to ask, "How did you celebrate Easter in an epidemic" surrounded by relentless death?

Here is what I recall. It was easier to observe Good Friday some years than it was to celebrate Easter. The suffering, the crucifixion, the pain seemed more real than the promise of new life and resurrection. Re-reading black lesbian poet Audre Lorde's "The Cancer Journals" (Spinsters Ink, 1980) recently reminded me that our community brings a rich tradition of coping with death and suffering that begins with acknowledging the reality of the suffering. She writes:

"I must let this pain flow through me and pass on. If I resist or try to stop it, it will detonate inside me, shatter me, splatter my pieces against every wall and person that I touch ... I want to write rage but all that comes is sadness. We have been sad long enough to make this earth either weep or grow fertile. I carry death around in my body like a condemnation. But I do live. The bee flies. There must be some way to integrate death into living, neither ignoring it nor giving into it."

We were able to maintain a future focus because in part we engaged fully the seriousness of our situation. We understood that many would die and we poured ourselves into an activism that laid the groundwork for it the future that we knew would come after. I understand that AIDS and HIV are different than the coronavirus. The very fact that right now we are separated by quarantine and sheltering in place and literally unable to touch each other, when touch was such a lifeline for us, underscores the difference. I also know that my single biggest regret from that period is that we did not emerge from it with universal health care for all. We cannot let this happen again. We owe it to those who have died from either virus to make sure that as we rebuild, universal health care as a human right for all is a non-negotiable building block of the society we create next. And we learned from HIV and AIDS that it showed us where sexism and racism and poverty infected our culture and government, just as the coronavirus is beginning to in the disparate numbers of black people who are dying. We must not settle for a public health approach that is not committed to addressing these inequities. We must remain vigilant to the discourse and practices of public health officials in regard to civil rights. I had a chill when I heard the otherwise admirable New York Governor Andrew Cuomo explain last week how they were deploying tests to "hunt positives" in order to identify people who may already be immune to infection or re-infection. I understood his meaning, but I maintain that we hunt game, not people. We bring to this new epidemic a finely tuned ear to making sure that everyone affected by this virus are people, not statistics.

I remember Good Fridays in the epidemic. To echo the words of the spiritual, "We were there when they crucified my Lord." And "we were there when he rose up from the grave." Because I also remember that each year I became better attuned to signs of resurrection that existed as persistently as spring. Some of my best Easter memories involve Castro Street promenades with Easter bonnets that rivaled Fifth Avenue in New York, parties led by the Sisters of Perpetual Indulgence, and tapping into the conviction that "Love is Stronger than Death." As a Christian I believe that I will once again see the people I love but long to see, and if I listen carefully I can still hear their voices from time to time, and right now they say in unison, "Don't Give Up! You are stronger than you think!"

This week I'll be singing this traditional Easter hymn via Zoom with my congregation, and next year I believe I will be singing Alleluias back together in person. We need Easter now more than ever.

Soar we now where Christ has led, Alleluia!
Following our exalted Head, Alleluia!
Made like him, like him we rise, Alleluia!
Ours the cross, the grave, the skies, Alleluia!" (Charles Wesley, 1739)

The Reverend Jim Mitulski is the pastor of Island United Church UCC in Foster City, California. He can be reached at revmituslki@gmail.com