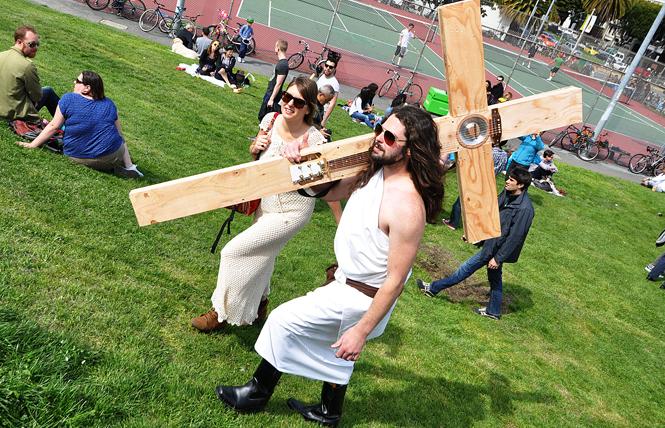 The novel coronavirus outbreak has moved much of life, both in the city and around the world, online — and celebrations of one of the holiest times of the year for Christians and Jews are no exception.

For those not inclined to participate in a formal worship service, the Sisters of Perpetual Indulgence's popular Hunky Jesus and Foxy Mary contests will also be virtual this year.

Many of San Francisco's LGBT-friendly religious congregations have moved their Easter and Passover services online for the first time.

The Sisters, a charitable drag nun group, made their announcement March 23, and it is the first time in the 25-year history of the event that it will be held online.

The Sisters had initially announced March 10 that the event would be postponed, but that was before shelter-in-place orders left much of the Bay Area and the nation shut down for weeks.

"The decision to make this contest online was because our Easter Celebration in Park has already become a cultural part of San Francisco. Every year we get thousands of visitors who are eager to have some fun and elect the new reigning Hunky Jesus and Foxy Mary," Sister Tilda NexTime wrote in an April 1 email to the Bay Area Reporter. "Since we can't have this celebration in the park this year due to the current situation, we thought that making it an online event was the best way to not let these people down. That way we can still have lots of fun ... staying home and healthy!"

This year's celebration had been planned for Mission Dolores Park.

People can still enter, as the deadline was extended to Good Friday, April 10. The top 15 Jesus and top 15 Mary contestants will be unveiled on the Sisters' Instagram page (@SFSisters) on Easter Sunday, April 12.

The San Francisco Queer Nightlife Fund is partnering with the Sisters for the virtual event. The Sisters announced April 5 that they have donated $10,000 to the fund.

As the B.A.R. previously reported, the fund was set up to help displaced nightlife workers. It has been hosting a Quaran-Tea Dance Sundays at 1 p.m. on its Facebook page to promote its relief efforts and the contest will be presented during that livestream.

"The logistics of the online Hunky Jesus and Foxy Mary contest remains the same as what was originally planned," Sister Carrie Me Away wrote to the B.A.R. in an April 7 email. "What has changed is the cross promotion with the Queer Nightlife Fund. The Sisters were looking for a way to raise money and support our queer nightlife out of work when we discovered the incredible work the Queer Nightlife Fund had put into motion. We wanted to support them and help promote their fundraiser and they have invited us to be a part of the weekly Quaren-Teas. We are planning to showcase some of our competitors as part of the Easter Sunday Quaren-Tea, which will coincide with our contestants being posted to Instagram for community vote."

Sister Roma encouraged contestants to "remember that our audience responds best to the Hunky and Foxy contestants who manage to convey a political, environmental, or unexpected twisted sense of humor to their character!"

"As the emcee of this event for more than 20 years I can tell you that voting for, and selecting, a winner will be done the same way it always is — by the public," Sister Roma wrote in an April 1 email to the B.A.R. "Fans of Hunky Jesus/Foxy Mary can visit the Sister's Instagram account on Easter Sunday to see the top contenders. They can vote with 'likes' and comments and the winner will be announced in the following week."

Streaming services
Glide Memorial United Methodist Church at 330 Ellis Street is one of many LGBT-friendly churches that have moved Sunday services online. This will include Easter services, according to Marvin K. White, Glide's minister of celebration.

"We are doing our first-ever sunrise Easter Zoom celebration," White said in a phone call with the B.A.R. April 3. "We're going to do what we normally do but on Zoom and Facebook and do it from there.

"This is the highest liturgy we do — Palm Sunday and Easter," White added.

White said that Glide was one of the first Bay Area churches to move services online.

Glide is trying to make attending church virtually as normal an experience as possible during the stay-at-home order, even going so far as to have ushers checking in on people in the comments section.

Glide will livestream its