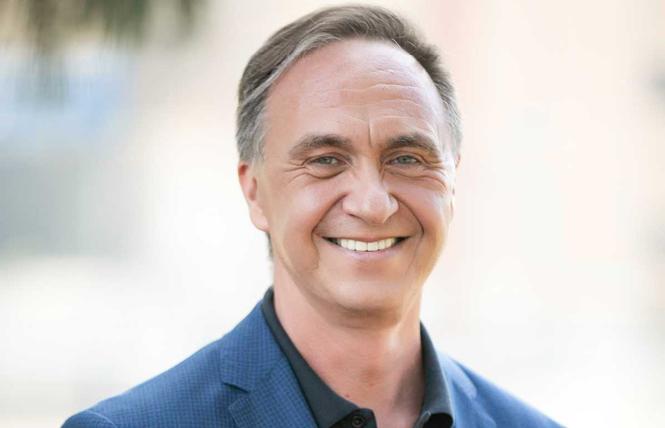 Rick Chavez Zbur, the executive director of the statewide LGBT rights group Equality California, told the Bay Area Reporter Tuesday (April 7) that he will be a candidate for Los Angeles city attorney in two years.

In a phone interview, Zbur said he was informing media outlets and others now, though he will remain as EQCA's leader through the end of next year. That will give the organization time to develop a succession plan, he said.

"I will be staying on as executive director through the end of 2021," he said.

He said that he was filing for the 2022 race so that he can open a campaign committee to raise funds, and so that he can be a leading progressive voice in the race.

The Los Angeles city attorney represents city departments but unlike the position in San Francisco, it also handles misdemeanor criminal cases in the city. Felony cases are handled by the Los Angeles County District Attorney's office.

Zbur said that he started thinking about running about nine months ago.

The 2022 race is open as current City Attorney Mike Feuer is termed out of office and announced last month that he's running for mayor. The Los Angeles Daily News reported in March that another candidate for the city attorney's race is Marina Torres. On her website, she stated that she served as a federal prosecutor.

She also worked in the Obama administration in the Department of Homeland Security, where she helped craft and implement the Deferred Action for Childhood Arrivals program and immigration policy, according to her website.

Given the novel coronavirus pandemic, Zbur said that he "probably" won't start fundraising for awhile. He said he wanted to remain at EQCA to ensure the organization is on solid financial footing. He has also overseen EQCA recover from previous money woes and a succession of executive directors before he was tapped to run the organization.

He said that his goals as city attorney would be to decriminalize homelessness and bring the city into the 21st century, as well as protect residents from fraud and abuse.

On his website, he lists other policy positions. "Justice for our planet and for the communities most impacted by pollution and climate change," he wrote. "Economic justice for working families and our most vulnerable. Criminal justice and gun safety. Health justice for everyone."