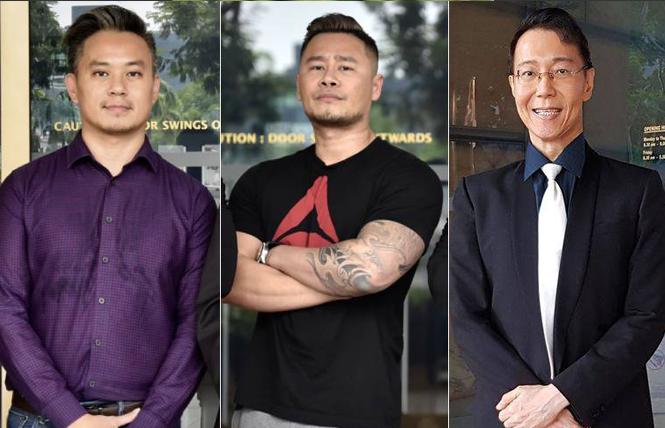 The petitions challenging the constitutionality of the law were gay activists' latest effort against Singapore's rarely enforced Penal Code Section 377A, a law that criminalizes acts of "gross indecency" between men.

"I am unable to agree that there are cogent reasons for a Singapore court to be able to depart from binding decisions of the highest court in the land," he wrote in the 105-page judgment released to the media Monday.

Gay and bisexual men face up to two years in prison if convicted and sentenced under the law.

The law doesn't only affect gay and bisexual men, it also casts a "shadow of oppression over the whole lesbian, gay, bisexual, and trans community," the trust noted in Monday's statement.

Bryan Choong Chee Hoong, 42, the former executive director of Singapore's LGBT rights organization Oogachaga and one of the three gay plaintiffs, told the New York Times that he was disappointed by the ruling.

"But my eyes are firmly on the road ahead," he said.

Hoong was joined by two other gay activists — Johnson Ong Ming, 43, a disc jockey and producer, and Roy Tan Seng Kee, 61, a retired medical doctor — who filed their own petitions with the court.

"This decision will be extremely disappointing for the plaintiffs and the wider LGBT community in Singapore, who had great hopes that new evidence presented to the court would make it clear that these draconian laws cannot withstand proper constitutional scrutiny," stated the trust's director, Téa Braun. "The ruling will also echo harmfully around Asia, where millions of people are criminalized simply because of their sexual orientation or gender identity."

Last year, Brunei felt the economic sting when the country attempted to criminalize homosexuality with the death penalty. Brunei Sultan Hassanal Bolkiah backed off of passing Sharia Law, a strict Islamic law that upholds stoning to death for people convicted of gay sex and adultery, following a swift global backlash and boycotts of the sultan's luxury hotels and businesses around the world, including the U.S.

Battle for decriminalization
Homosexuality is illegal in 70 countries around the world. Commonwealth countries, many of which are former British colonies, make up many of the nations where homosexuality remains illegal. A large number of those countries are in Africa.

In 2019, Kenya upheld its anti-sodomy law and Gabon criminalized homosexuality with penalties of up to six months in prison and fines up to $8,500 (5 million CFA francs).

Inspired
However, LGBT activists have seen hope since India's Supreme Court struck down the country's colonial-era anti-sodomy law Section 377 in 2018. The law was used to harass, blackmail, and criminalize consensual gay sex.

A year later, high courts in Angola and Botswana also struck down their respective anti-sodomy laws.

In 2014, the Singapore Court of Appeal declined to remove the country's anti-gay law from the books. The court also held that LGBT people would have to wait for reform of Section 377A to come through Parliament, reported the trust.

Adding to the Singaporean LGBT activists' sense of hope in Asia is Taiwan's legalization of same-sex marriage in 2019, along with recent court rulings in Hong Kong and pending same-sex marriage legislation in Thailand.

"Once Thailand passes that [law] we believe there could be very significant progress on LGBT rights in countries like Cambodia, Vietnam, Laos and Myanmar," added Robertson.

Leslie Bulbuk, 57, and her wife Marta Donayre, 50, and Karin Bogliolo, 79, and her wife Judy Rickard, 72, returned home last month. The couples are currently in a 14-day self-quarantine following their long journeys home.

"[We are] hoping that all of the Americans that are trapped everywhere right now can get home," said Bulbuk, who was stuck in a Barcelona Airbnb following Spain's mandatory lockdown issued March 15.

The couple endured canceled flights and other issues trying to get home from their vacation that started February 24.

Bulbuk said she and Donayre were two of about 65 passengers who returned home March 19 on Iberia, Spain's airline.

Despite the self-isolation, they consider themselves lucky.

"I'm even more grateful to be back home because, you know, it looks like there are still thousands of people stuck overseas and the U.S. government doesn't appear to be doing much in the way of helping," said Bulbuk, who is back working from home as a legislative aide for Assemblyman Marc Berman (D-Palo Alto).

Rickard and her wife are also grateful to be home.

Bogliolo and Rickard were aboard Holland America Line Amsterdam's 128-day Grand World Voyage that departed Fort Lauderdale, Florida January 4. They disembarked, along with 1,300 passengers, including about 10 other LGBT-identified people, in Fremantle/Perth, March 23.

"Even though we were feeling very upset, I realize now that we were really lucky to get off when we did rather than have the Holland America Amsterdam be denied a port at Fremantle," Rickard said.

"It's really bad for some people," she continued. "Even though they weren't on their ships as long as we were."

They are now in self-isolation and recovering from jet lag in their apartment in a San Jose retirement community, Rickard said.

Despite their ordeal, Bogliolo and Rickard already took up Holland America's offer of 50% off a future cruise, in place of a refund of the same percentage that was offered. They booked a similar around the world trip for 2022 hoping the cruise line will retain a similar itinerary to their disrupted vacation, she said.

Friends of the women are helping them by dropping off food and other supplies during their self-quarantine, the couples said.

Stuck abroad
The Guardian reported that there are at least 10 cruise ships that remain at sea due to ports turning them away. Thousands of passengers are affected and the coronavirus is spreading on some ships.

This week, the Zaandam, along with another Holland America ship, the Rotterdam, traversed the Panama Canal and are headed toward Florida, where it the ships will have to meet requirements in order to port.

CNN reported at least 189 people aboard another cruise ship scheduled to arrive in Florida this week are suffering flu-like symptoms.