Syphilis rates up in 2019, but public health shifts to virus 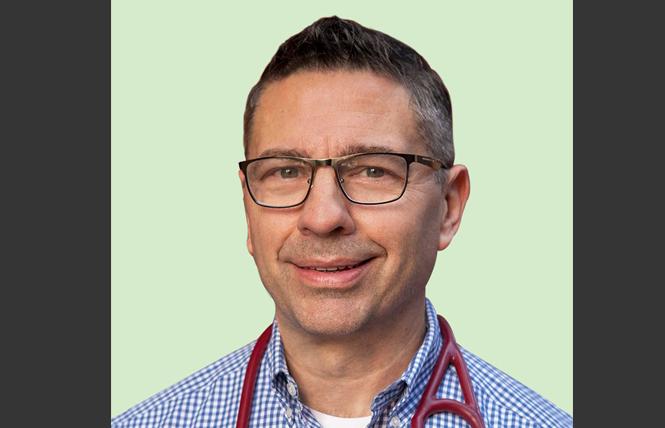 The public health infrastructure traditionally dedicated to fighting sexually transmitted diseases has shifted its focus to fighting the novel coronavirus as a recent report showed an increase in syphilis cases in San Francisco.

"This is the big story that's just starting to be told — the remarkable way that STD programs are being affected by the redeployment of workers," Dr. Christopher Hall, the chair of the clinical advisory committee of the National Coalition of STD Directors, told the Bay Area Reporter in a March 26 phone call. "In some cases there's an absence of a functioning STD clinic. In others, such as in San Francisco, they're able to prevent it from getting gutted, but everywhere clients access services are being affected."

Hall was a medical director of the Magnet men's health clinic in the Castro from 2004 until 2020. He also served as the vice president of medical affairs at the San Francisco AIDS Foundation, which now operates Magnet at its Strut men's health center in the Castro.

At Magnet, sexual health services have been limited to essentials, according to a receptionist interviewed in-person March 20.

Those essentials include sexually transmitted infection testing if acute symptoms are present, testing of people who have had sexual contact with those who have tested positive for syphilis, people who are worried about HIV exposure, and those who need to access antiretrovirals or their PrEP medications.

Hall said that disruptions in STD services happening nationwide include people not being able to get injected antibiotic treatments, clinics being less able to test for STDs using oral swabs because of fears of coronavirus transmission in close proximity, adapting to drive-through testing similar to the drive-through COVID-19 (the disease caused by the novel coronavirus) test sites, and not wanting to let people who are symptomatic of COVID-19 inside.

"It's intense," Hall said. "It's intense for folks who work in STD care and now have to do the next best thing (to treat STDs)."

San Francisco Department of Public Health officials, and other medical professionals contacted by the B.A.R. for this story, said that they could not comment on the year-end STD report for the city in 2019 (released in early March) because they are devoting their resources to fighting the coronavirus.

When asked about the intersection of COVID-19 and STDs, DPH said that having an STD does not necessarily increase one's risk.

"SFDPH does not have any evidence that STDs have any impact on a person's risk of acquiring any respiratory virus, including the coronavirus (COVID-19)," Jenna Lane of DPH wrote in an email to the B.A.R. March 11.

Meanwhile, as the B.A.R. previously reported, the coronavirus outbreak has caused a hearing on allowing gay bathhouses in San Francisco to be delayed. Restrictions on bathhouses in the city were first enacted in 1984 as a response to the AIDS epidemic.

That hearing was pushed back to July. Gay District 8 Supervisor Rafael Mandelman announced in early February that he's preparing an ordinance aimed at updating the city's policies regarding private rooms in adult sex venues. It was to be taken up by the supervisors' public safety and neighborhood services committee, which he chairs.

The two gay bathhouses in the Bay Area — Steamworks in Berkeley and The Watergarden in San Jose — shuttered after government orders limiting non-essential businesses' ability to operate as a result of the coronavirus outbreak.

The pandemic is hampering public health officials' ability to fight STDs, according to the National Coalition of STD Directors.

"More than half of the nation's public health outbreak response workforce, STD disease investigation specialists, have been redeployed for COVID-19, and up to half of the nation's STD clinics are closed or repurposed for the virus," the group announced in a March 20 news release.

"This is across the board," Matthew Prior, the director of communications for the coalition, said in a phone interview with the B.A.R. March 20. "STD prevention in the United States has slowed to a halt with up to half of staff being relocated for coronavirus response."

Prior said that what STD first responders — "the people that go into communities, find disease and arrest the spread of infection" — need the most, is more of them.

"We have needed more first responders for a long time," Prior said. "There's not enough people to go around to respond to coronavirus and maintain effective STD services."

Prior said that coronavirus is limiting even STD clinics that remain open, with rules about what those clinics can provide and how many people are allowed in at one time.

Syphilis cases rise in the city as other STDs stay flat
The year-end STD statistics released by the San Francisco Department of Public Health March 4 show total chlamydia and gonorrhea cases down in 2019 from 2018 — but also feature an alarming rise in syphilis cases, particularly among women.

Hall said that the reason more syphilis cases are being found among women is because more tests are being given to pregnant women so that their babies won't be born with syphilis.

"There has been increased case-finding of congenital syphilis," Hall said. "If you don't treat women appropriately during pregnancy, that's when the newborn becomes infected."

There was one case of congenital syphilis in San Francisco in 2019, according to DPH statistics, compared with zero cases the year before.

Dr. Jeffrey Klausner, who was director of STD prevention and control services at the San Francisco Department of Public Health from 1998 to 2010, said the rising syphilis rates are the result of budget cuts.

"We've been seeing rates go up for the past 10 years now," Klausner, who is now an adjunct professor of medicine at UCLA, said in a phone interview with the Bay Area Reporter March 6. "They leveled off in the mid-2000s in San Francisco, partly because of our Healthy Penis campaign, but when that was defunded the rates went upward again."

The popular campaign featured a Healthy Penis and Phil, the syphilis sore, urging men who have sex with men to regularly get tested for STDs.

Syphilis cases were at a near all-time low nationally at the turn of the millennium, and have spiked since then. According to Klausner, intravenous drug use is a major cause for the increase in cases among women (cases of the bacterial infection are still predominantly spread between men who have sex with men).

"A cause is the relationship to the opiate epidemic and the exchange of needles, drugs for sex, and the intersection of that with poverty," Klausner said. "With proper resources, syphilis can be brought under control.

"The spillover of the male population to female is concerning because syphilis in that population can become congenital syphilis," he added.

Hall said that there had been concern that increased PrEP use as a prophylaxis for HIV infection had made some people think numbers of bacterial STDs would explode.

But Hall said that hasn't happened because a PrEP prescription is often accompanied by increased testing for those infections.

"The offsetting phenomenon is that people on PrEP are getting screened every three months or so with regular screening so you are catching STIs earlier," Hall said. "On average, sexually active gay men were getting screened every nine-12 months but in the era of PrEP what is happening is we are catching STIs earlier and the forward transmission is blunted or decreased. The increased screening is keeping the numbers of STDs relatively in check."