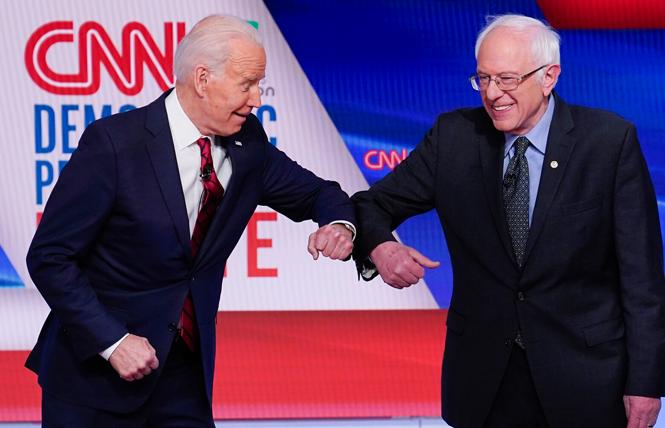 "If one of the two remaining candidates has what amounts to a de facto insurmountable lead," said Maddow, referring to Biden, and if the other candidate is "never going to catch up and just wants to stay in the race because he's got reasons of his own," staying in the race "has a different weight now, a different cost."

That, she noted, is prolonging primary voting at a time when medical experts urgently calling on all Americans to severely curtail social contact in an effort to slow down the spread of the coronavirus outbreak.

Concern about the pandemic prompted the Republican governor of Ohio to postpone that state's participation in the March 17 primaries, and several other states have delayed their upcoming primaries.

But Florida (with 219 delegates to the Democratic National Convention), Illinois (with 155), and Arizona (with 67) went ahead with voting. Biden easily won all three.

Sanders' campaign indicated early in the evening that the senator would not make the traditional primary evening address to supporters. Both the Sanders and Biden campaigns had eliminated public campaign events even before the U.S. Centers for Disease Control and Prevention urged Americans to avoid any gathering of more than 10 people.

Whether Sanders drops out soon or not, the contest for the Democratic nomination for president seems nearly over. Biden's margins of victory, since winning the South Carolina primary February 29, have strongly suggested that Democratic voters have decided to unite behind his effort to unseat Republican incumbent President Donald Trump.

Biden focused his remarks, via webcast, exclusively on the coronavirus pandemic, saying that fighting the pandemic is "akin to fighting a war."

"This is a moment when we need our leaders to lead, but it's also a moment when the choices and decisions we make as individuals are going to collectively impact on what happens," said Biden.

LGBT support varied
Interestingly, neither Biden nor Sanders seemed to be the top choices of most LGBT people at the start of the Democratic primary, but both have strong records of supporting equal rights for LGBT people and there's evidence to suggest that each now has LGBT support.

In Florida, LGBT groups got behind Biden. A vote at a recent meeting of Dolphin Democrats in heavily LGBT Wilton Manors counted 20 for Biden, two for Sanders. And longtime national and state LGBT activist Nadine Smith, of Tampa, said she's supporting Biden.

An impromptu survey of people attending the "All In to Win" conference of the Florida LGBTQ+ Democratic Caucus in Orlando March 7 found most (84%) were going to vote for Biden; only 7% said they would support Sanders (9% were for candidates who had already dropped out).

Biden's spouse, Jill Biden, appeared before the group at a conference banquet. She referred to her husband as a "real Democrat," a reference to Sanders' identification in the Senate as an independent and self-labeling on the campaign trail as a democratic socialist. She reminded the audience that, as vice president, Biden spoke up in favor of marriage equality at a time that led to "so much progress" on the issue. She credited individual LGBT people with doing the years of work necessary to advance the rights of LGBT people.

"For all the progress that we've made, we are far from finished," said Jill Biden. "We know that hatred and bigotry are still rooted in too many hearts. We mourn the blood and terror of the Pulse nightclub shooting, and we have to watch as Donald Trump tries to destroy so many of the gains that we've achieved ... [including] the ban on transgender people in the military to the administration arguing before the Supreme Court that employers should be able to discriminate against the LGBTQ community."

Queer actress Cynthia Nixon, of "Sex in the City" fame, made a pitch for Sanders during the conference luncheon earlier in the day. She credited Sanders with having "set the terms of the debate," bringing attention to Medicare for all, the green new deal, and the minimum wage.

"If we just say, 'Pick somebody in the [political] center that everybody is going to go for,' this is not what's going to win us this election," said Nixon. "I am for Bernie because I want to live in Bernie Sanders' America ... [and] because I also know that Bernie is the best chance that we have to defeat this very formidable foe.

"Bernie has been a tremendous ally of this community since he has been in politics," added Nixon, noting that Sanders voted against "Don't Ask, Don't Tell" and the Defense of Marriage Act in the 1990s when "his opponent," Biden voted for them.

"Bernie was with us when it certainly was not cool to be with us," said Nixon. "When he speaks to our issues, he's not checking off a box to get the gay vote."

"We certainly don't agree on every issue," wrote Sinema on Twitter. But she said Biden has a "track record of building bipartisan coalitions to achieve results."

But while individual LGBT leaders seemed to be supporting Biden, NBC News reported that its exit polls in 12 of the 14 states which held primaries on Super Tuesday (March 3) indicated 39% supported Sanders, 21 % voted for Senator Elizabeth Warren of Massachusetts (who withdrew from the race after those primaries), and 19% supported Biden. Nine percent voted for gay former mayor Pete Buttigieg even though he had dropped out of the race before Super Tuesday voting and endorsed Biden. Eight percent voted for former New York City mayor Michael Bloomberg (who also dropped out following Super Tuesday).

The NBC exit polls also found that about 9% of Democratic primary voters identified as LGBT — a percentage about double of the LGBT population in those states.

Perhaps because the NBC exit polls indicated a large turnout by LGBT people to the Democratic primaries, Biden and Sanders both stepped up their appeals to LGBT voters in the past two weeks. Biden, on March 5, released "The Biden Plan to Advance LGBTQ+ Equality in America and Around the World." That same night, in a speech, Sanders criticized Biden for initially supporting the DADT ban on openly gay people in the military.

And, during the March 15 debate on CNN, Sanders brought up Biden's initial support in the U.S. Senate for DOMA.

"I voted against the Defense of Marriage Act, you voted for it," said Sanders. "It takes courage sometimes to do the right thing."

Meanwhile, speculation that Biden might, should he win the nomination, consider Buttigieg as a running mate evaporated during Sunday's debate, when Biden said he would "in fact pick a woman" as his vice presidential nominee.

Sanders indicated he would "in all likelihood" choose a woman running mate, too.

Drag performers launch 2020 get out the vote effort
Sign up!