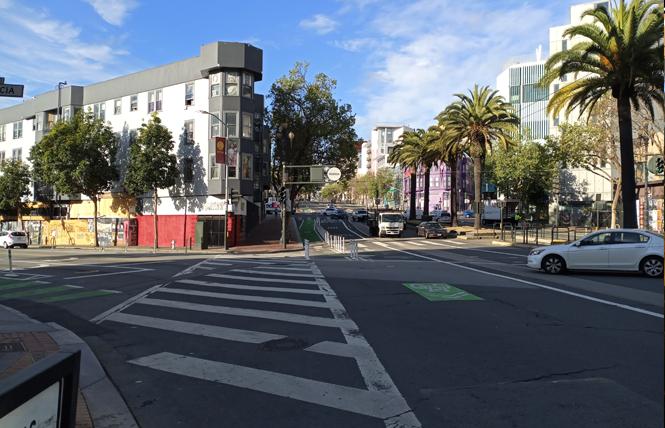 Empty streets like this at Valencia and Market were the new normal in San Francisco beginning Tuesday morning. Photo: Scott Wazlowski

Everyone must comply with the unprecedented shelter-in-place order announced by mayors, county health officers, and other officials, even though it will significantly alter daily life, put many out of work, and increase economic hardship on small businesses.

Several crowdfunding campaigns have been started to support queer folks in the nightlife industry, and the city is expanding its sick leave policy to help more small businesses and their employees — but beyond the economy, we must not take the health risks we face lightly.

More than 100 organizations signed on to an open letter to media outlets and health officials pointing out that the LGBTQ community is in some ways uniquely endangered by the coronavirus. Our increased susceptibility is a direct result of three factors:

1. The LGBTQ+ population uses tobacco at rates that are 50% higher than the general population: COVID-19 is a respiratory illness that has proven particularly harmful to smokers.

2. The LGBTQ+ population has higher rates of HIV and cancer, which means a greater number of us may have compromised immune systems, leaving us more vulnerable to COVID-19 infections.

3. LGBTQ+ people continue to experience discrimination, unwelcoming attitudes, and lack of understanding from providers and staff in many health care settings, and as a result, many are reluctant to seek medical care except in urgent situations — and perhaps not even then.

"In addition, there are more than 3 million LGBTQ+ older people living in the United States," the letter reads. "LGBTQ+ elders are already less likely than their heterosexual and cisgender peers to reach out to health and aging providers, like senior centers, meal programs, and other programs designed to ensure their health and wellness, because they fear discrimination and harassment. The devastating impact of COVID-19 on older people — the current mortality rate is at 15% for this population — makes this a huge issue for the LGBTQ+ communities as well."

The signers, which include several Bay Area nonprofits, ask that health officials routinely include LGBTQ demographic data in surveillance efforts and that health workers treat all patients equally, regardless of their actual or perceived sexual orientation or gender identity/presentation, immigration status, age, ability, and national origin. The letter also asks that all COVID-19 responses take into account exceptionally vulnerable members of the LGBTQ+ communities, including elders, bi people, and black and brown trans and gender-nonconforming/nonbinary people. As coronavirus testing ramps up, it's important for health care providers, hospitals, and clinics to adhere to these requests.

Gay state Senator Scott Wiener (D-San Francisco) and gay Assemblyman Todd Gloria (D-San Diego) also issued a joint statement this week that pointed to the higher rates of cancer and HIV than the general population among queer people, who are also more likely to experience homelessness, which increases risks to health and sanitation challenges. The two lawmakers asked the community to "come together."

"This is a time to come together in support of our most vulnerable communities, including vulnerable LGBTQ people," they stated. "Resources should go to engaging and supporting everyone in need, and we're committed to fighting for LGBTQ people — and anyone needing an advocate — in this difficult moment in our nation and world's history."

Now that so many are self-isolating or working from home, the social fabric of the Bay Area is frayed. Online communication is more important than ever. So is continuing to support LGBTQ businesses, including the B.A.R. Advertising, the lifeblood of our free weekly, is down as shops shutter and events are canceled or postponed. We're going to have to revitalize our institutions and community when this episode passes.

Yes, in order to survive, we must all be in this fight together.