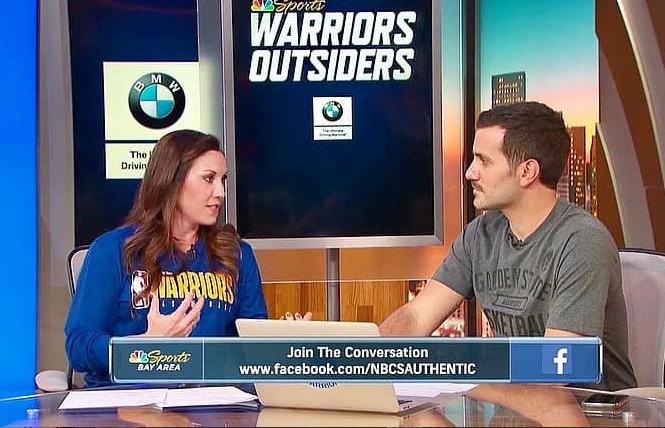 During times of crisis such as the one we are all staggering through right now, when our daily routines are disrupted, when we most feel the need to be close to each other but are warned by public health officials to keep our distance from each other, it is easy to get our values as confused and scrambled as those panic buyers raiding every shelf they can for rolls of toilet paper.

Nowhere is this more apparent than in the sports world, with virtually the entire industry and its affiliates having been brought to a swift and grinding halt.

A year ago if people told you they'd gotten a virus, you'd probably ask them if their computers had shut down. Now you ask them if they've shut down their social lives and office hours.

But life goes on, and so too shall sports. When that happens, even if the Olympics get postponed a couple of years and the NBA season is lost, sports will once again have the chance to help us to reconnect socially, whether as participants or spectators, athletes or fans. In the meantime, we can appreciate the joys we have coming into our lives and the differences our work has made.

Take Blair Hardiek for example. The wife of former Stanford basketball standout Jennifer Azzi, who played at Missouri and was an assistant coach at the University of San Francisco, started a job last November on the cable television show "Warriors Outsiders," where she regularly discussed the Warriors and the NBA season with fellow anchors Grant Liffmann and Drew Shiller.

That job is now on hold, as is her work as global director for NBA International. It is uncertain when the prep level basketball camp she and Azzi hold will open. But she's proud of the work she was able to accomplish on "Warriors Outsiders" to date, and she's looking forward to the arrival of a new baby girl in the family.

Hardiek and Azzi, who were married in August 2015, have a son, Macklin Roberts.

Hardiek said the idea for her to join "Warriors Outsiders" came from Rick Welts, a gay man who's president of the Golden State Warriors.

"I was at a movie screening with Rick," Hardiek said. "He paused in the middle of our conversation, looked at me and said, 'Hey, we have this opportunity with NBC Sports. I think you'd be great.' I was very excited about an opportunity to talk about a sport I was already very passionate about."

The folks at NBC Sports Bay Area reached out to her and put her in phone contact with Liffmann and Shiller.

"We talked and there was an automatic good chemistry," she said. "We had some good laughs. It's been great working with two guys who are very knowledgeable about what they're doing, so it's been a match made in heaven."

And a match made at an opportune time in basketball history, with visible signs that at least at the professional level, progressive efforts are being made to break down barriers such as sexism and homophobia.

Hardiek noted that NBA Commissioner "Adam Silver said he'd like to see the NBA have about 50% female referees. I think it's going to take awhile to get to that number, but I think this is the first professional men's sport where you see women brought in not just as token hires, and now you are seeing it more in other sports."

There are currently 11 female assistant coaches in the NBA. Previously Lisa Boyer served a year with the Cleveland Cavaliers in 2001-02, and Nancy Lieberman coached with the Sacramento Kings for two seasons, 2015-17. San Antonio's Becky Hammon is the longest serving female NBA coach, having started in 2014, and was interviewed for the head coaching position with the Milwaukee Bucks.

"People ask, 'What's the difference between men coaching in the NBA and women?'" Hardiek said. "And there isn't any difference. The knowledge is the same. It doesn't matter what gender you are as long as you know the game. Where we still need to see it happen is college basketball. You have a lot of men coaching women's basketball in college, but you don't see it vice versa."

Hardiek said that perspective gave her an extra appreciation for her role with "Warriors Outsiders."

"For people to see women talking about men's basketball, and it's with gender neutral knowledge — I think it's a step in the right direction for the NBA in general," she said.

And as the NBA embraces a more inclusive culture, she thinks institutionalized or internalized homophobia are disappearing, too.

"There's a saying that sports unites people," Hardiek said. "I think in basketball now, it's at the point where there is less of a care of what color you are, what religion you are, where you come from, who you date, or who you're married to. Now, it's more, 'Well, do you know basketball? Great: there's a roster spot for you. Great: there's a coaching spot for you. Great: there's an analyst spot for you.' I think doors are now open to where it's not about gay and straight anymore, and hopefully in the future we'll see that it's not about male-female any more at any level. There's a plethora of different sports. It doesn't matter what your gender is, who you are, what you are. It doesn't matter who you're married to. That's the beauty of sports: it brings people together."

And that, folks, is a nice new normal to work toward.