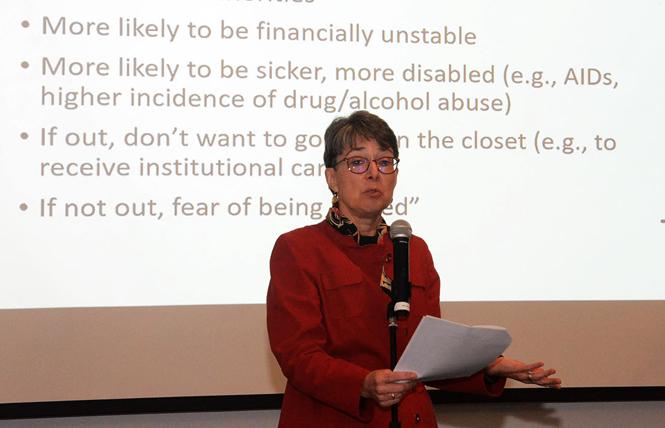 Mary Twomey, the former co-director of the National Center on Elder Abuse, speaks about risk factors during a March 5 elder abuse forum at the LGBT Community Center. Photo: Rick Gerharter

Tackling elder abuse in the LGBT community is a challenge, as attendees heard at a recent forum, but they should be proactive and notify authorities.

That was the message to about three-dozen people who gathered at the San Francisco LGBT Community Center March 5 for "Protect Yourself from Elder Abuse — A Forum for the LGBTQ Community," a three-hour session on how to prevent and respond to elder abuse.

"People say 'we know elder abuse happens but it doesn't happen in our community,'" said Mary S. Twomey, a lesbian who is a former co-director of the National Center on Elder Abuse. "Oh, yeah, it does. It's an equal opportunity crime."

Twomey said people are sometimes hampered by stereotypes about what elder abuse is.
"We used to think elder abuse had one cause: caregivers got stressed," Twomey said. "What we often see instead are abusers with pretty significant issues like untreated mental illness, untreated drug addiction, and financial dependence."

Twomey explained that while people may think positively about a man taking care of an elder, for example, he may be doing it because he doesn't have a job and is taking advantage of them.

Twomey said people shouldn't allow shame or guilt to prevent them from coming forward if they are being abused physically, sexually, or financially.

"The people who come after you and take money are professionals," Twomey said. "This is what they do. Dante didn't make circles of hell low enough for them."

Being with a younger person, bruises, and social isolation can all be signs of elder abuse, or not, depending on the context, Twomey said.

While states receive a block grant from the federal government for social services, there is no specifically dedicated federal funding for adult protective services, according to Twomey.

The forum was organized by Tom Ammiano and Tim Wolfred, two gay former elected officials who have been longtime community activists. Ammiano, 78, served in the state Assembly and is a former San Francisco supervisor and school board member. Wolfred, 75, was the first gay trustee at City College of San Francisco and former director of the San Francisco AIDS Foundation.

"We are knocked out by the response and how people are willing to immerse themselves in this issue," Ammiano said. "Tim is a whiz at organizing."

For his part, Wolfred said having Ammiano connected with the forum helped increase attendance.

"I have a lot of experience for something like this," Wolfred said. "Having Tom's name on the publicity helped, too."

Tamari Hedani, the associate director of the Elder Abuse Prevention Program of the Institute on Aging, talked about some of the financial scams older people fall prey to. One of the most powerful, she said, is the romance scam.

"In this day and age with these specific apps, it's very easy to make romantic connections whether they are authentic or not," Hedani said. "They'll send pictures, send gifts. There will be an investment. But the red flag is when they ask for money."

Other scams include fake calls from the IRS demanding money, and calls from people claiming to be relatives arrested in foreign countries. Latino immigrants fall victim to the latter in large numbers, Hedani said, because corrupt police practices in their home countries — and large families — make such calls believable.

San Francisco District Attorney Chesa Boudin was a surprise speaker at the event. He affirmed his office's commitment to taking elder abuse seriously.

"It's such a big issue when we are talking about vulnerable people that we work to help," Boudin said. "We at the DA's office are excited to fill that role however we can."

"Sometimes elder victims can testify from their own bed at home with a video link," Boudin said.

Boudin defended his office's handling of an elder abuse case in recent days. On February 22, Dwayne Grayson, 20, allegedly videotaped Jonathan Amerson, 56, striking a 68-year-old Asian man with a pole while the latter was collecting recyclables.

The man behind the camera could be heard saying, "I hate Asians."

While Amerson is being charged with elder abuse and robbery, Grayson will not be charged and the district attorney's office will pursue a "restorative justice" model.

"It's heartbreaking to see someone at his age making a living collecting recyclables and see them taken away in a way that is so racist and discriminatory," Boudin said of the victim. "And that man (the victim) said clearly to us he didn't want that young person prosecuted in a traditional criminal case.

"Criticism comes with the territory, but when we talk about victim's rights — what other people who are resistant to change are asking us to do is retraumatize the victim," Boudin added.

Tables at the community center's Rainbow Room were filled with pamphlets and flyers directing people to resources that could help them with either elder abuse or elder issues in general.

Matthew Simmons from Shanti promoted the Peer Support Volunteer Program the agency is doing where the goal is to help isolated people access community services and feel less lonely. Fear of loneliness can allow people to let themselves to be abused by people who don't really care about them, several of the presenters said.

"Of our clients, 80% don't have an emergency contact and three of our clients in the last year died alone," Simmons said. "They feel isolated and feel left behind, and so the goal is to match them with a volunteer who will help them emotionally and practically. Suicidal ideation is extremely high and what we want to do is bring them back into the world."

Charlie Howell and Carol Jean Wisnieski both attended the forum. They have each been the victim of identity theft in the past.

"I wanted to find out the resources available in the community that a lot of people don't know about until they desperately need them," Howell said.

Wisnieski said a family member was the victim of an East Coast scam ring.

"For me, it's personal and dear to my heart," she said.