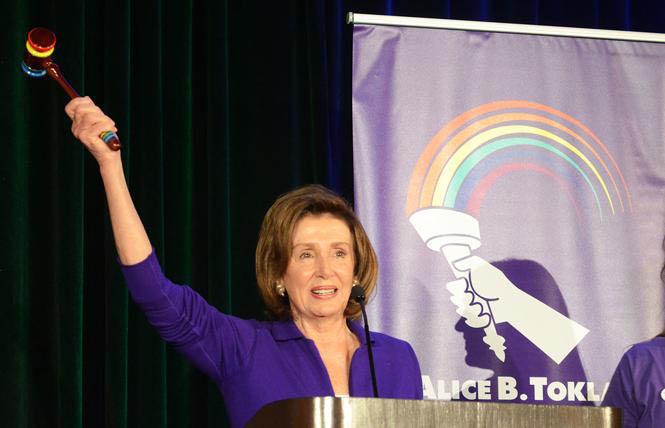 For the first time since she was elected to Congress in 1987, House Speaker Nancy Pelosi (D-San Francisco) will face a progressive Democratic challenger in November for her 12th Congressional District seat.

Coming in second place in Tuesday's primary race for the House seat was Shahid Buttar, an attorney and deejay, who received 12.67% of the vote, according to unofficial returns Wednesday. He was able to knock out John Dennis, chair of the San Francisco Republican Party, who came in third with 9.22% of the vote.

The top two vote-getters regardless of party advance to the general election November 3. And Pelosi came in first place Tuesday with a commanding lead of 72.45% of the vote.


Buttar first ran two years ago for Pelosi's House seat but fell short by 1,174 votes to advance to the general election that November. He has argued that in a head-to-head matchup against Pelosi he would be able to defeat her due to the city's electorate increasingly voting for progressives, as was seen in the victories last fall of District 5 Supervisor Dean Preston and District Attorney Chesa Boudin over their more moderate opponents.

In a statement touting his second-place finish, Buttar's campaign warned Pelosi that she now has to contend with "a formidable progressive challenger" and noted that she had already begun campaigning for re-election ahead of the primary. Voters in her district last week had received a glossy multi-page mailer touting her work on myriad issues in Congress and widespread support from local, statewide, and national groups.

"Words can't describe how grateful I am for the support of my neighbors," stated Buttar, a cisgender heterosexual man who also identifies as queer due to his gender expression being fluid. "I've been frankly amazed by the outpouring of support for our campaign from all parts of the city, and also from how far beyond it the support has come. Thousands of donors from every state in the union have joined hundreds of volunteers from every part of San Francisco and thousands more across the country to put me — an immigrant with neither property nor a family legacy — in a position to replace the most powerful corporate politician on the planet."

Yet Buttar has a steep hill to climb to defeat Pelosi, as the combined total of votes her challengers received Tuesday — 34,025 — is less than half of the 89,460 votes she received. And Buttar likely received a boost from being on the same ballot as that of presidential candidate Senator Bernie Sanders (I-Vermont), a democratic socialist who came in first place in San Francisco with 32.72% of the vote.

Yesterday was a special day. We planted seeds. Now, we have 8 months to win our race.

Tens of thousands of people have been doing the work to build our campaign & spread the word. This is *your* campaign.

Political newcomer Katie Valenzuela, an environmental policy adviser, was in first place with 53% of the vote, while Hansen had 46% in the race for his District 4 seat, which covers the city's downtown and LGBT neighborhood of Lavender Heights. He is seeking to serve a third four-year term on the council and was the only out candidate in this year's even-numbered council races.

In a post on Facebook late Tuesday night, Hansen noted there are upward of 20,000 ballots still to be counted and urged his supporters to remain positive. The county elections office noted on its results webpage that an updated vote count will be posted at 4 p.m. Friday.

"Let's let the votes be counted and rest up because there is much work still to do," wrote Hansen, who brought his newly adopted son, Henry, with him to vote Tuesday.

The council race had turned ugly in the final days ahead of the March 3 primary, with door hangers comparing Hansen to President Donald Trump due to his endorsing the reelection of Republican Sacramento District Attorney Anne Marie Schubert, a lesbian, in 2018. The local Democratic Party had kicked Hansen and several other council members out of the party due to their support of Schubert and had endorsed Valenzuela in Tuesday's contest.

Rising rents and home prices in Sacramento had been a focal point of the race, with Hansen criticized for not doing enough to protect renters or fight for affordable housing to be built. He had argued that he was the strongest voice for such issues on the council and had told the Bay Area Reporter that tackling homelessness was currently one of his highest priorities.

Lesbian leads in Alameda education board race
Special education public school teacher Angela Normand, a lesbian, appears headed to victory in her bid to be only the second LGBT person to serve on the Alameda County Board of Education. According to the unofficial returns Wednesday, Normand was the top vote-getter in the race for the panel's Area 2 seat, which includes the city of Alameda where she lives and various Oakland neighborhoods, including Jack London Square, Chinatown, and parts of West Oakland, Fruitvale, and the Oakland hills.

Normand took first place with 51.60% of the vote, while the incumbent, Amber Childress, the board's current vice president, trailed in second with 48.40%. Childress was first elected in 2016, while the race marked Normand's first time seeking public office.

Their contest was a proxy between public school supporters and those who back charter schools. Groups like the California Charter Schools Association Advocates and prominent charter school supporters, like Netflix CEO Reed Hastings, had paid for mailers backing Childress' reelection, touting her as "the fighter we need" on the county education board.

Childress, a mom and the development manager at San Francisco Achievers, a nonprofit that works to send the black male students in the city to college, had been endorsed by the East Bay Times newspaper. Also supporting Childress were her board colleague Joaquin J. Rivera, a gay man who has served on the education body for a decade and is currently the board president, and Alameda County Superintendent L. Karen Monroe.

Normand had endorsements from the Alameda County Democratic Party and the East Bay Stonewall Democratic Club, the main LGBT political group in Alameda County. She works in the Brentwood Unified School District and last June won election to the board of her union, the California Teachers Association, representing her colleagues in both Alameda and Contra Costa County.