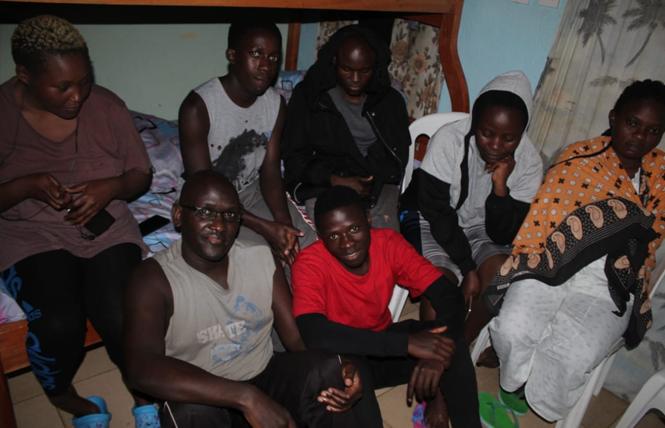 LGBT refugees in Nairobi, Kenya might soon find themselves homeless and without any source of income as funding for housing and other programs is rapidly drying up.

Grants from the Hebrew Immigrant Aid Society and the United Nations High Commission for Refugees supporting a safe house run by Team No Sleep Foundation have run out, wrote Tumu, the foundation's 29-year-old executive director.

Tumu, who is bisexual, wanted to be identified by one name for safety reasons.

Homosexuality is criminalized and socially unacceptable in Kenya.

The foundation operates on an estimated $10,000 annually, according to Tumu, a refugee who took over leading the foundation in 2019 when its second executive director, Mathias Mugenyi, a 28-year-old bisexual refugee, was resettled in Canada.

The foundation was founded and led by Henry Bugembe, a gay refugee, in 2015. Bugembe was resettled in the United States in 2019.

Until now, the foundation has supported itself through the grants, Tumu wrote in a WhatsApp interview late last month, but he hasn't received any feedback from funders about their renewal. Mugenyi and Tumu never developed individual donor support, which they are now hoping to start, wrote Tumu.

The foundation's most pressing goal at the moment is to continue providing a safe house for queer refugees.

If the refugees don't raise the $300 to meet March's rent and utilities, the 10 household members could soon be on the streets.

"They will become homeless and it will increase the suffering," wrote Tumu.

The foundation's leaders are looking at raising $1,480 to keep the house and its programs going for the next several months.

Helping Africa's LGBT refugees
Since 2015, an estimated 500 queer refugees have benefited from the foundation's safe house and programs, wrote Tumu in an email interview with the Bay Area Reporter last November.

Mugenyi's mission with the project was to improve LGBT asylum seekers and refugees' lives through community programs, such as improving health and well-being and livelihood initiatives. At the same time, he also worked on projects advancing the human rights and dignity of LGBT asylum seekers and refugees through the foundation, he wrote in November.

The foundation has provided safe housing and employment for LGBT asylum seekers and refugees fleeing Burundi, Congo, Rwanda, Uganda and other neighboring African countries who wouldn't have been able to find shelter or work otherwise due to homophobia and Kenya's difficult asylum process.

Refugees entering Kenya need to apply for asylum prior to being able to apply for refugee status in order to be relocated to a new host country. Many asylum seekers continue to have their paperwork stalled in the system only to ultimately be denied. Society's homophobic attitudes, combined with the application process, cripples the people's ability to find employment and apply for refugee status with the UNHCR and ultimately be resettled in a safe country.

"The majority of LGBT refugees here do not work because of document issues and discrimination due to our sexuality," Tumu wrote.

The foundation operates a safe house that temporarily houses up to 10 refugees for six months or longer, depending on the individual's needs. A majority of the refugees living in the house are from Uganda, wrote Tumu. The house includes food, assistance with the asylum and refugee application process, health care, transportation to UNHCR appointments, employment training, and other services.

Last year, Ugandan LGBTs experienced a spike in violence and the threat of the return of the so-called Kill the Gays bill by the country's officials.

Employment opportunities
The foundation also provides training and employment for the refugees in programs such as HIV/AIDS prevention, security, and launching micro-business enterprises, such as the foundation's chicken farms where participants sell eggs, chicken and rice dishes, and other products.

Steve Roth, executive director of the Organization for Refuge, Asylum, and Migration, supported the foundation's micro-business chicken farm enterprise. He donated 100 chickens during a tour in Kenya last fall, the B.A.R. previously reported.

The chickens sustained the foundation through much of the winter, but they are now all gone, Tumu wrote when the B.A.R. asked about the micro-business.

As of last November, there were an estimated 150 queer refugees being trained or working through the foundation's programs, Tumu said.

The foundation isn't currently working on any other programs with ORAM, wrote Roth and Tumu. Roth wasn't aware of its current desperate situation, he told the B.A.R.

LGBT filmmakers protest TLVFest
At least 130 filmmakers have signed a pledge with organizers of the Boycott Divestment Sanctions movement not to attend this year's Tel Aviv International Film Festival.

Of the filmmakers participating in the boycott, an estimated 100 identify as LGBT, according to the Hollywood Reporter.

The pledge was released ahead of this year's Women Film Week, March 4-9, produced by TLVFest organizers.

TLVFest is sponsored by the Israeli government. The 15th annual film festival is scheduled for June 4-13.

BDS movement leaders' protest against Israel's so-called pinkwashing campaign has gained traction over the years, garnering some celebrity support. Pinkwashing is defined as Israel using the LGBT movement to promote itself as a human rights leader, while denying rights for Palestinians, including LGBT Palestinians.

Filmmakers who signed the pledge committed not to submit films or participate in TLVFest or events sponsored by Israeli institutions until Israel complies with international law regarding Palestinian human rights, reported the trade paper.

"Filmmakers are taking a principled stand while helping unmask Israel's deceitful co-optation of LGBTQIA+ rights to ensure its impunity as it continues to expand illegal settlements on Palestinian land, demolish Palestinian homes, hold millions Palestinians in Gaza under siege, incarcerate Palestinian political prisoners and raid Palestinian children's bedrooms during the night," said Stephanie Adam, spokeswoman for the Palestinian Campaign for the Academic and Cultural Boycott of Israel, in a statement to the Bay Area Reporter.

"Queer filmmakers play a crucial role in giving visibility to queer communities, to the injustices against LGBTQIA+ persons and to queer and trans emancipation," said Adam. "Palestinians are calling on queer filmmakers not to allow the Israeli government, through the TLVFest partnership, to use this valuable work as a pink smokescreen to hide its harsh discriminatory policies that South Africans have described as worse than their country's defunct apartheid regime."

The boycott is organized by PACBI, the cultural arm of the Boycott Divestment Sanctions movement.

The BDS movement's goal is to pressure Israel to comply with international human rights laws.

Matan Zamir, a gay man who's deputy consul general to the Pacific Northwest at the Consulate General of Israel in San Francisco, responded to the boycott, calling it "unfortunate" to see filmmakers and "one minority group is calling to boycott another minority group."

He added it doesn't do any good for the BDS or the Palestinian cause.

Zamir was saddened to learn that so many LGBT filmmakers, including in the Bay Area, had signed onto the BDS pledge.

"It's ... unfortunate that filmmakers work to promote dialogue and freedom of speech and they choose to target the only place in the Middle East that has pride parades and LGBTQ rights," he told the B.A.R. during a phone call March 4. "For people who cherish dialogue, interactions, and communication, this is, in my opinion, [it's] counterproductive for their own cause."

Zamir was quick to point out that Israel is the only place in the Middle East that allows LGBT people to live openly, have rights, and celebrate who they are, including queer Palestinians who flee their own communities due to anti-gay violence and are supported by Israel's LGBT community.

"The LGBTQ community in Israel is working so closely with the LGBTQ Palestinian community," he continued, noting that when the Israeli LGBT community sees how queer Palestinians are poorly treated within their own community. "Many of them find their way to Israel. Israel is the only place to get protection."

"I am thrilled that the IACHR has reaffirmed that criminalization of same-sex relations is wholly incompatible with basic human rights standards," said OutRight Action International Executive Director Jessica Stern in a February 27 news release announcing the commission's decision. "I urge Jamaican authorities to comply with and ensure full implementation of the commission's recommendations, so that they translate into real change for LGBTIQ people."

The colonial-era law, known as the Offences Against the Person Act, was enacted in 1854 and amended in 2014. The act carries a sentence of up to 10 years' hard labor for anyone caught having sexual relations with someone of the same sex.

Despite rarely being enforced, it continues to encourage negative social attitudes and violence against LGBT Jamaicans, according to OutRight Action International.

The commission's decision was only for Jamaica, but it could potentially have an effect throughout the Caribbean.

"More than half of the countries in the Caribbean region continue to criminalize same-sex relations," stated Neish McLean, Caribbean program officer at OutRight Action International, who added that the commission's decision "will be felt beyond the borders of Jamaica."

He said the decision creates "significant ripple effect for decriminalization of same-sex relations across the Caribbean, setting a precedent which would be difficult to ignore."

IACHR called upon Jamaican officials to repeal the law and instructed the Caribbean island nation to pay reparations to the plaintiffs in the case.

IACHR is a principal and autonomous organ of the Organization of American States, which aims to promote and protect human rights in the American hemisphere.

Call for protests of PAI conference in Ghana
Conservative and religious leaders in Ghana are calling upon the government to stop Pan Africa International Lesbian, Gay, Bisexual, Trans and Intersex Association's upcoming conference this summer.

The conference is scheduled for July 27-31 in Accra, Ghana's capital city.

This is the first time that the coalition of 192 LGBT organizations is hosting its conference in West Africa.

PAI's mission is to "improve human rights of individuals on all grounds, including sexual orientation, gender identity and expression and sex characteristics" in Africa, according to its website.

Opponents in the Christian-majority nation, which also has an 18% Muslim population, have urged the country's government to deny visas to conference organizers.

In a statement to Ghana Web, Amnesty International Ghana's director expressed "disappointment over the backlash" against the LGBT conference.

"Our constitution does not criminalize somebody being homosexual, it only criminalizes the activity concerned," Robert Akoto Amoafo, Amnesty's director, said responding to opponents' arguments. "So, if we are saying that they should not host their conference then we are saying that every group of people who hold a meeting needs to be stopped."

Advocates for Christ Ghana listed nearly 10 reasons, including raising the country's anti-sodomy law, Section 104 of the Ghanaian Criminal Code of 1960, and theft of the country's national symbol, in an op-ed published by Modern Ghana.

The conservative organization's leaders called on Ghana's attorney general, the Ghana Police Service, and its criminal investigative department to investigate the "conspiracy to commit a crime," stating it was "a crime in itself," for the LGBT gathering to take place.

"It is illegal in Ghana. How can you have such a conference here in Ghana? It will not happen, trust me," attorney Moses Foh-Amoaning told the media.

Foh-Amoaning is the leader of the anti-gay organization the National Coalition for Proper Human Sexual Rights and Family Values.

PAI is one of the 1,300 members of the International Lesbian, Gay, Bisexual, Trans and Intersex Association.

The conference is being hosted in partnership with Accra-based Popular Education and Human Rights Ghana, a civil society organization.

Updated, 3/11/20: This article was updated to correct the origins of the Team No Sleep Foundation.