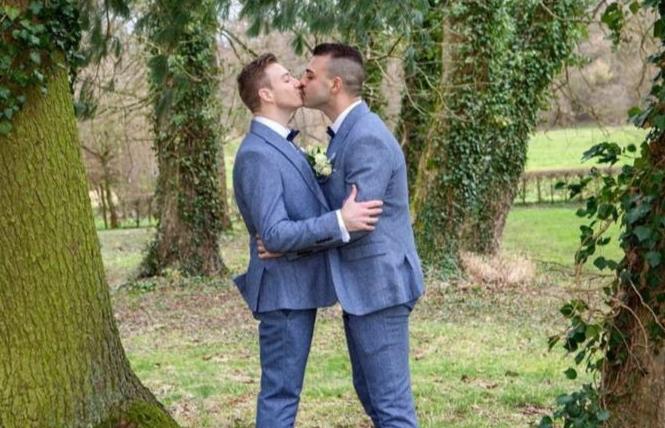 Last March, Australian Olympic gold medal diver Matthew Mitcham announced he was engaged to his partner, Luke Rutherford. In early February, the couple made it official with a legal ceremony in Great Britain, followed last week with a public ceremony in Belgium and a honeymoon in Amsterdam.

"Basking in the afterglow of the best week of my life," Mitcham posted on Instagram. "I'm so lucky to have such a beautiful bunch of family and friends."

Ahhh — if only NBC Sports had been there to capture a photograph of their kiss. (Famously, the network cut away from Mitcham kissing his former partner after his gold medal dive at the 2008 Summer Olympics in Beijing.)

Mitcham, who won that medal just months after coming out, will be inducted into the International Swimming Hall of Fame in April.

Many family members of the couple attended the Belgium ceremony, but Mitcham's uncle could not attend because he is being quarantined along with fellow passengers from the cruise ship Diamond Princess, which had a major outbreak of the coronavirus.

Twenty cities in running for Gay Games XII
The Federation of Gay Games has announced that 20 cities from 14 countries and six continents have submitted initial bid documents to host Gay Games XII in 2026.

So much for those who say interest in multi-sports festivals is flagging.

"As far as I know, this is the largest number of cities to submit the request for information," Dave Killian, site selection officer for the FGG, told the Bay Area Reporter. "I think it shows the allure of bringing the largest sporting event open to all to their city to celebrate diversity. Having cities on six continents is also, I believe, a first, and that shows the improved acceptance of the LGBTQ+ communities all around the world."

Interested bidders include Mexico's Guadalajara, which was a finalist for the 2022 Gay Games that were eventually awarded to Hong Kong and which hosted the FGG's annual membership meeting last October; 1998 Gay Games host Amsterdam; and California's San Diego.

Other American cities in the running are Austin, Texas; Fort Lauderdale, Florida; Minneapolis; and New Orleans.

According to the FGG, each of the potential bid organizations in those cities submitted request for information papers in February and will now have until April 30 to submit letters of intent and pay a $7,500 fee to advance. Any cities advancing through that stage will have until August 1 to submit formal bid books and another $7,500 fee.

Major international mainstream sports festivals, such as the Olympic Games or the Pan American Games, have struggled to generate much competitive interest in bidding for their events, largely because of the massive expenditure required to build sports venues with large spectator accommodations. The LGBT-focused World Outgames struggled to attract sports participants or multiple bidders to host throughout its 12-year history — which started with multimillion dollar losses in the inaugural Montreal Games in 2006 and ended with financial losses and the cancellation of the 2017 Miami event — largely because of a lack of a sports focus or robust sanctioning body to advise host organizations.

In contrast, the Gay Games have had multiple bidders each quadrennial cycle since competitive bidding was introduced for the 1994 Gay Games IV; five of the seven Gay Games since 1994 have drawn 10,000 or more participants; and 2018 host Paris reported a local economic impact of $117.9 million.

Arizona bill would bar female transgender athletes
The Arizona state House of Representatives has approved a bill Tuesday that would ban transgender athletes from participating in girls and women's sports in public schools and colleges. The Republican-introduced House Bill 2706, which passed 31-29 along party lines, now goes to the Republican-controlled state Senate for approval.

The bill also allows athletes who feel they were injured by past missed opportunities or victories because of transgender inclusion to file lawsuits seeking redress.

Nancy Barto, a Republican representative from Phoenix, sponsored the bill.

"Science is what it is," Barto said. "The difference between males and females is obvious."

Well, it also used to be obvious that the sun revolved around the earth, which was flat. Bartok did not cite what science she meant, and much scientific evidence indicates that any athletic advantage transgender women have is negligible.

Arizona's non-discrimination laws do not protect gender identity (although five cities — Phoenix, Tempe, Tucson, Sedona, and Winslow — do) and there are active efforts to curtail transgender rights. For example, Arizona House Bill 2082 was introduced in January, which would penalize any public school officials or teachers for referring to students by pronouns that do not conform with the gender listed on the students' birth certificates.

While the Arizona sports bill was moving forward, similar bills in other states were meeting mixed results.

A New Hampshire bill that would have barred transgender athletes from competing in girls or women's sports failed in a House of Representatives committee, but may be taken up by the full House in another month. A similar house bill in Idaho passed and now is before the state Senate.