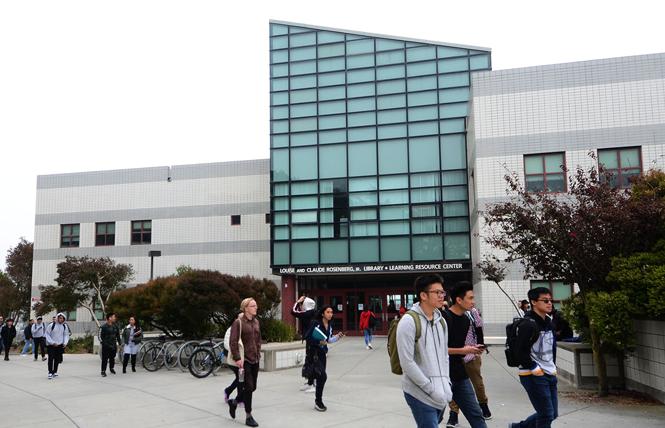 The Bay Area Reporter recommends YES votes for city Propositions A, B, C and state Proposition 13 on the March 3 ballot.

Proposition A: City College Job Training, Repair, and Earthquake Safety Measure. YES. This measure would allow City College of San Francisco to borrow up to $845 million by issuing bonds to repair, construct, or acquire buildings, sites, or equipment; make earthquake safety improvements; and upgrade energy efficiency by increasing the use of renewable energy. It requires 55% of the vote to pass.

The proposition was placed on the ballot by a unanimous vote of the Community College Board. The college has been navigating through financial straits for many years, and trustees decided to seek voters' approval for these critical dollars to repair and retrofit the college's aging infrastructure. Some of the necessary work includes improving disabled access and updating electrical, security, and fire safety systems. Also, Prop A would allow for the renovation and expansion of workforce training program facilities at the Bayview campus.

Vote YES on A.

Proposition B: San Francisco Earthquake Safety and Emergency Response Bond, 2020. YES.This measure would authorize the city to borrow up to $628.5 million by issuing general obligation bonds for improvements to fire, earthquake and emergency response systems. It requires 66 and 2/3% of the vote to pass.

The San Francisco Board of Supervisors placed Prop B on the ballot. The city must ensure that it can effectively respond in the event of a major fire, earthquake or catastrophic emergency. Bond proceeds would fund construction, acquisition, improvement, and completion of the emergency firefighting water system infrastructure, neighborhood fire and police stations, a firefighting training campus, the 911 call center, and other disaster response facilities.

There is no opposition to Prop B. Vote YES on B.

Proposition C: Retiree Health Care Benefits for Former Employees of the San Francisco Housing Authority. YES. This measure is a charter amendment that would make retiree health care coverage available to certain city employees who previously worked for the Housing Authority based on their combined years of service and date of hire. The Housing Authority is a local government agency, but is separate from the city. Some funding is provided by the federal Department of Housing and Urban Development, but last year the feds asked the city to assume responsibility for some of the Housing Authority's administration. The result is that the city has begun hiring some former Housing Authority employees. Since the city has hired them, these workers should be eligible for city retirement benefits like other municipal workers.

The Board of Supervisors voted 11-0 to place Prop C on the ballot. It requires 50% plus 1 of the vote to pass. There is no opposition. Vote YES on C.

First off, this Prop 13 has nothing to do with property taxes and the "original" Prop 13 that passed in 1978. This Prop 13 is a legislative statute that allows the state to sell general obligation bonds totaling $15 billion — of which $9 billion is for public schools and $6 billion is for higher education facilities. The funding is designated for four specific types of projects: renovation, new construction, charter schools, and career technical education facilities. The higher education funding is spread evenly among community colleges, state universities, and UC campuses.

The voter guide notes that some school districts could undertake more facility projects because of the additional state bond money, along with their own local bonds, like Prop A for City College.

Prop 13 has broad bipartisan support, including Governor Gavin Newsom, the Bay Area's legislative delegation, and many Republican lawmakers. It needs 50% plus 1 to pass. Vote YES on Prop 13.