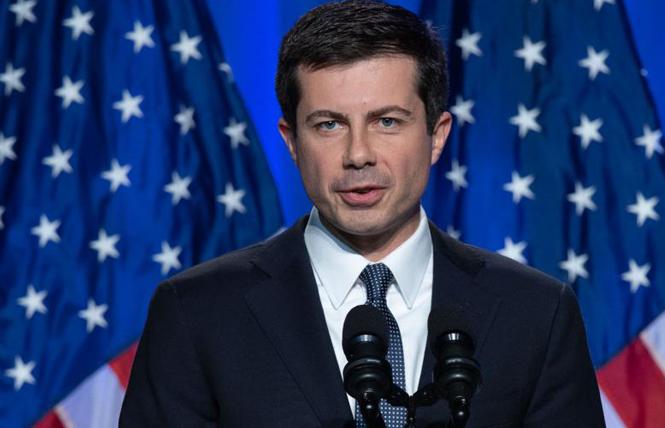 Next week, 14 states, including California, will vote on Super Tuesday and a third of the delegates for the Democratic nominee are at stake. With his landslide win in last weekend's Nevada caucuses, Senator Bernie Sanders of Vermont is the current frontrunner. But the self-described democratic socialist is too far left for many voters and moderate candidates in the race are splitting the vote. There is one candidate who we think is best equipped to take on President Donald Trump in the general election: Pete Buttigieg. The former mayor of South Bend, Indiana is the first openly gay Democratic top tier contender in a presidential contest, but that's not the only reason we support him. Having watched Buttigieg's performances in the primary debates, town halls, and on the campaign trail, we've come to believe he is the one candidate who can unite the fractured party, reach out to disaffected independent voters, and make a credible case for defeating Trump in November. Buttigieg is currently in second place with 25 pledged delegates (Sanders has 48); he needs a strong showing in South Carolina's primary this Saturday, and in the Super Tuesday states next week, in order to close the gap with Sanders.

As a Washington outsider, Buttigieg knows that the status quo is not working for many Americans who are anxious about access to affordable health care insurance. Buttigieg has his Medicare for All Who Want It plan that will create universal health care and put Americans back in charge of their own health care decisions. It's not blowing up the Affordable Care Act, as Sanders and Senator Elizabeth Warren (Massachusetts) want to do with Medicare for All. Rather, under Buttigieg's plan, everyone will be able to opt in to an affordable, comprehensive public alternative. This affordable public plan will incentivize private insurers to compete on price and bring down costs, his website notes. His website states that the plan will cost about $1.5 trillion over 10 years: "It will be paid for by rolling back the Trump corporate tax cuts, which will generate $1.4 trillion in revenue, and the rest from cost savings that result from empowering the federal government to negotiate drug prices with pharmaceutical companies." He also wants to improve mental health services and addiction treatment, two initiatives that are critically important for meaningful health care reform. Most importantly, people who are satisfied with their health care coverage can keep it. Sanders' plan to eliminate private health insurance is a deal-breaker for many voters and will require raising taxes, which he doesn't mention much.

Buttigieg also has a plan for free college for those who need it. Buttigieg has said that he doesn't believe that American taxpayers should be paying for the tuition of millionaires and billionaires. Rather, public tuition will be free for about 80% of American families, including those earning up to $100,000, and many middle-income families with multiple children. He pledges to invest in Historically Black Colleges and Universities, Tribal colleges and universities, and others that serve minority communities. In short, he wants everyone to have the opportunity to go to college if they want. He proposes expanding the public loan forgiveness program, allowing such loan forgiveness to begin after a person's first year of public service; full debt cancellation would be in effect after 10 years.

As a gay man who came out at 33, Buttigieg also knows about discrimination. His major shortcoming is that so far, he has not demonstrated support among minority communities, particularly African Americans. An incident when he was mayor last year in South Bend, where a white cop shot and killed a black man, drew criticism and exposed the divide between his administration and the African American community. However, Buttigieg is committed to working with racial minorities and tackling the systemic racism that exists in our society, and has proposed his "Douglass Plan," which he describes as "a comprehensive and intentional dismantling of racist structures and systems, combined with investment in the freedom and self-determination of black Americans." Criminal justice reform is also part of the plan.

Racism is a growing problem in this country — starting from the top with Trump, who began his presidential campaign in 2015 calling Mexicans "rapists," and has never stopped adding to his pile of racist vulgarity. Buttigieg, who speaks several languages fluently, including Spanish, has a curiosity to connect with other cultures for whom Trump has only contempt unless he benefits materially from their relationship.

Many question whether Buttigieg, 38, is too young and not yet ready to be president. He has spent most of his life thinking deeply about good government and public service, then taking action and providing leadership. His eight years as mayor are more government experience than Trump has. Buttigieg often points out that he has more military experience than the president, who has none. (Buttigieg took a leave during his first term as mayor to serve in Afghanistan as a lieutenant in the Navy.) The next Democratic president is guaranteed to face a difficult, daunting task repairing the damage created by Trump. We need a leader who cares about this country and the people who live and work here. We need a president who can motivate us and the world to create a brighter future under a competent, professional administration.

Finally, we must acknowledge the historic precedent a Buttigieg presidency would set — unimaginable only a few years ago. A gay U.S. president, married to his husband, Chasten, would be an inspiration to LGBTQ people across the world and a testament to the freedom this country can sometimes provide to achieve one's ambition. Buttigieg struggled to acknowledge his gay identity for many years before finally embracing it. Over the course of the campaign, we've seen Buttigieg's increasing ease and comfort discussing being gay. Last week, a 9-year-old boy came out at a Buttigieg event. Like Barack Obama, Buttigieg has the potential to be a transformational leader.