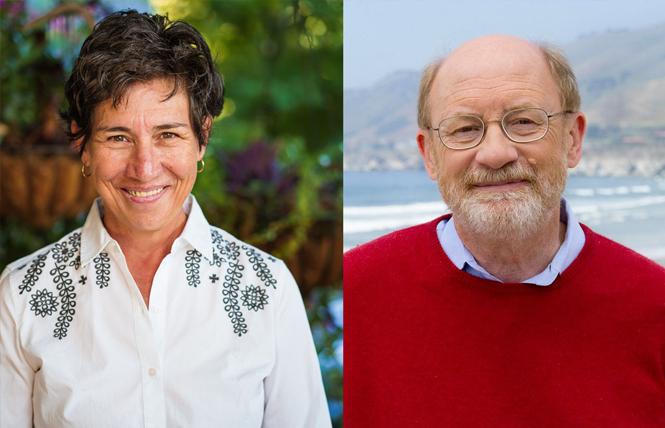 Next month, voters in San Joaquin County and the surrounding area, and those in Santa Cruz County and the neighboring regions have an opportunity to send two experienced out lawmakers to Sacramento. We endorse Assemblywoman Susan Talamantes Eggman, a lesbian, in the District 5 Senate race, and former Assemblyman and state cabinet secretary John Laird, a gay man, in the District 17 Senate race.

Eggman seems to have the tougher of the two races. One of her opponents, Democratic Modesto City Councilman Mani Grewal, a straight man, angered LGBT advocates and officials last year for peddling homophobic and inaccurate attacks against Senate Bill 145. The bill, which was written by gay state Senator Scott Wiener (D-San Francisco), did not pass last year — he's continuing to fight for passage of it this year. The legislation is aimed to ensure LGBT adolescents are treated the same as their heterosexual peers when faced with the possibility of being listed on the state's sex offender registry. While Grewal did eventually remove an online ad laden with homophobic and inaccurate information about the bill, he never did apologize for it. Governor Gavin Newsom has endorsed Eggman, who is a strong advocate for our community. In the state Senate, Eggman will fight to protect the district's water, stand up for veterans and work to bring educational opportunities to the Central Valley. She is also an advocate of regional solutions to problems such as transportation and housing. We need her to keep working in Sacramento.

Closer to home, Laird would be an excellent addition to the state Senate. He was one of the first two gay men elected to the Assembly in 2002. He was reelected twice before being termed out. Former Governor Jerry Brown appointed Laird as California's secretary for natural resources, where he served until Brown was termed out after eight years in office. That role, as Laird notes on his campaign site, placed him on the front lines in the effort to fight and adapt to climate change. He ran a state agency with 25 departments, 19,000 employees, and an almost $10 billion budget and says that he's running for state Senate to build on his leadership to protect and invest in the Central Coast and California. His other priorities are health care, education, the economy, and housing. Voters in the 17th Senate District would be charting a course for the future with Laird in the Capitol.

In the East Bay, we support state Senator Nancy Skinner (D-Berkeley) in her reelection bid. Skinner has been a steadfast ally. In Contra Costa County, we endorse Marisol Rubio, another straight ally, who is seeking to defeat Steve Glazer in the 7th Senate District. Glazer recently lost the endorsement of Equality California over his controversial decision to abstain from voting on Wiener's intersex bill. During the hearing, Glazer seemed not to understand what intersex is when he said, "When you decide to be gay ... ." (He later apologized for the comment.) We need lawmakers who will not trivialize intersex medical conditions and erroneously equate that with sexual orientation or gender identity.

Assembly races
In local Assembly races, we endorse gay Democratic incumbent Evan Low in the 28th District, which includes Campbell and other Peninsula cities. He has worked to end the blood donation ban on gay men, which included education about advances in HIV detection and treatment. In recent years, he has taken on ending conversion therapy for adults (California already bans the practice for minors) though it has been an uphill battle. Nevertheless, it shows that Low is not afraid to take on tough LGBT issues, making California a leader for other states.

In the 25th Assembly District that includes portions of North San Jose, Fremont, and other cities Alex Lee, who identifies as bi, is in a crowded field for this open seat. While only 24, Lee, who used to work for Low, would be a good addition to the Legislature.