Vets kicked out for being gay can upgrade their discharges 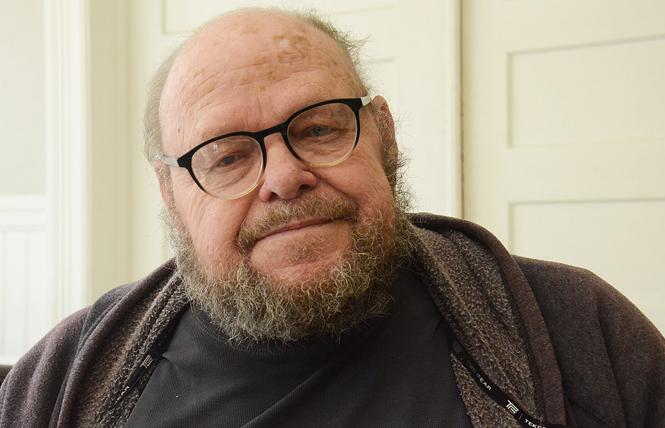 Carl Tebell, who was drummed out of the Navy for being gay, recently had his bad conduct discharge upgraded to honorable. Photo: Rick Gerharter

Carl Tebell finally received word in December that he had been granted an honorable discharge from the U.S. Navy nearly 70 years after he was drummed out for being gay. He is still waiting to receive his newly issued DD 214 discharge paperwork in the mail so he can access medical care at a U.S. Department of Veterans Affairs facility in San Francisco.

"I was kind of relieved. It didn't dawn on me what it meant to have an honorable discharge," said Tebell, 87, who resides in a senior living facility in San Francisco. "This all happened 67 years ago. To wait this long took a toll. At one point I said, 'To hell with it.' I gave up and thought I was going to be stuck with this for the rest of my life."

Advocates for LGBT veterans estimate that roughly 114,000 U.S. service members were "involuntarily separated" from the military due to their sexual orientation between the end of World War II and the repeal in 2011 of the homophobic "Don't Ask, Don't Tell" policy that barred LGBT people from serving openly in the military. While many of those veterans could likely qualify to correct or upgrade their discharges, just 8% had done so as of 2018, according to a report presented that April at a conference held at the Legal Services Center of Harvard Law School.

"If a service member was discharged solely because of their homosexuality or their sexual orientation then their discharge should be upgraded to honorable given there was no other misconduct," said Robert M. Alexander, a retired U.S. Air Force lieutenant colonel who now works as the Equal Justice Works Fellow (which is sponsored by law firm Greenberg Traurig, LLP) for Swords to Plowshares in San Francisco. "However, just because a service member had misconduct in their service record it does not necessarily mean they can't get their discharge upgraded. It is a case-by-case basis."

Over the last seven decades Tebell had initially gotten nowhere when he attempted to upgrade his bad conduct discharge he received in late 1953, just months after the end of the Korean War. Tebell had joined the Navy earlier that year, leaving his hometown of Aurora, Illinois for training at the Navy Hospital Corps School in San Diego.

But that fall a fellow classmate had turned Tebell and 14 other men in to Navy officials for being gay. Throughout October and November Tebell found himself in a living hell, ostracized from the other naval recruits in a separate barracks, ridiculed as a "faggot" and a "queer" by other sailors outside the base chow hall, and forced to eat food scraps for weeks on end.

"They threw the leftovers in one big pan for us to eat," recalled Tebell. "It wasn't a prison but it was like a prison. We weren't allowed to associate with other people."

Navy investigators tried to get Tebell to reveal the names of other gay men he knew in the service, but Tebell refused to do so.

"They were after a witch hunt. I wouldn't turn anyone else in," recalled Tebell in an interview with the Bay Area Reporter at his home across the street from the historic Mission Dolores Basilica. "My paperwork said I had a bad conduct discharge. The worst part about it was I had to turn in my pea coat and Navy uniform that I had paid for."

Upon his being released, Tebell called relatives who lived in Southern California, but unbeknownst to him, someone from the Navy had informed them he was being discharged due to his homosexuality. Tebell was told he wasn't welcome at their home, so he called a friend who let him stay at his place in San Diego.

"My last paycheck from the Navy was about $34," said Tebell, who had successfully begged his aunt and uncle not to say anything to his father back in Illinois. (His mother at that point had already passed away; his father died in 1972.)

The Navy did purchase Tebell a one-way train ticket on the California Zephyr for him to return to Illinois and move back home with his father. Because he was not honorably discharged, Tebell had difficulty finding work, as employers would always ask to see his discharge paperwork.

"I lost out on a lot of nice jobs because of that," noted Tebell.

He ended up working in the psych ward of a Chicago hospital but disliked it and quit. A friend he had met at a gay bar who relocated to San Francisco invited him to come join him, so Tebell headed west in the winter of 1960. He befriended the late gay drag queen Jose Sarria and was arrested one night during a raid of the Black Cat gay bar where Sarria worked in North Beach.

Eventually, Tebell became a merchant marine, traveling the world working as a butcher on passenger freight ships. He retired in 1985 and joined the Alexander Hamilton Post 448 of the American Legion for LGBT veterans. Through a fellow member he was introduced to Alexander with Swords to Plowshares in 2018 and sought to upgrade his discharge.

"It took a hell of a time to get it. What good will it do me now? I am retired and have a good place to live," said Tebell, though he has applied for a disability pension from the Navy as his personnel paperwork revealed he had injured his left hand during rifle training. "Bob got it done and I am very grateful for it. But it was a long haul to getting here."

Five classifications
The military has five classifications of discharges, with the best being an "honorable discharge." The second most favorable is called a "general discharge under honorable conditions." Either grants veterans to a host of benefits administered by the federal Veterans Affairs, from college scholarships and health care to housing and loans.

"A bad conduct discharge is the result of a court-martial or military trial," explained Daniel R. Devoy, a visiting associate professor and director of the Veterans Legal Advocacy Clinic at the Golden Gate University School of Law. "Oftentimes, to avoid going to court-martial, a service member will take a lesser sentence. That is the third type of discharge or other than honorable."

A service member given a bad conduct or dishonorable discharge, explained Devoy, "will forfeit everything" in terms of their military benefits. It is why it is especially important for those LGBT veterans given such discharges due to their sexual orientation to seek having it be upgraded to one of the three other discharge categories, he noted.

"The review process nowadays is a lot more straightforward. They are very open with any issue of an LGBT veteran," said Devoy, adding that he has handled such cases that ended "very successfully" for the service member.

Each branch of the military has its own discharge review board that oversees requests for changes, corrections, or modifications to veterans' discharges or dismissals that were not issued by a sentence of a general courts-martial. Veterans must petition the review board themselves, as the military does not proactively do it.

It is unclear exactly how many veterans given less than honorable discharges because of their homosexuality have been granted discharge upgrades. Efforts to have former President Barack Obama automatically upgrade the discharges of veterans pushed out for homosexuality were ultimately unsuccessful.

The reasons for why more LGBT veterans haven't sought to upgrade their discharge on their own run the gamut from not wanting to relive painful memories to being unaware they could request a change to their discharge. Another factor could be the false impression that such discharge upgrades are not being granted under the Trump administration, which has shown hostility toward LGBT rights and re-instituted the ban against transgender people serving in the military.

But LGBT veterans advocates stressed in interviews with the B.A.R. this month that the military has shown no aversion in recent years to upgrading the discharges of LGBT veterans who qualify under the standards adopted by the armed services for determining if a discharge based on a person's sexual orientation should be re-examined. The process can be time-consuming, however, and requires a certain amount of paperwork that some veterans may be disinclined to filling out.

"There is a guidance letter written by the secretary of defense's office that is still in effect and instructs discharge review boards. It tells them how to handle discharges that were done because of a person's sexual orientation," noted Alexander.

The discharges of deceased military veterans can also be upgraded if requested by their next of kin, noted David Sonenshine, a senior staff attorney with the National Veterans Legal Services Program. (For information of how to do so, click here.)

Thus, the family of the late gay San Francisco supervisor Harvey Milk could request that he be posthumously given an "honorable discharge." As the B.A.R. reported last week, Milk was given an "other than honorable" discharge from the U.S. Navy and forced to resign on February 7, 1955 rather than face a court-martial because of his homosexuality.

The trove of naval records obtained by the B.A.R. appears to dispute the veracity of an archival document housed in the San Francisco Public Library's San Francisco History Center that authors of several recent biographies of Milk had used to claim that Milk was honorably discharged from the Navy. Milk's gay nephew Stuart Milk, who oversees a foundation dedicated to the legacy of his famous relative, did not respond to the B.A.R.'s request for comment.

Based on Milk's personnel files, Sonenshine told the B.A.R. having his discharge upgraded "shouldn't be an issue there" if his family made such a request.

Alexander agreed, telling the B.A.R., "I bet he would be able to get his discharge upgraded from what I can see." Because Milk was an officer in the Navy, he was given a choice to either resign his commission and accept the other than honorable discharge, or face being court martialed for homosexual conduct, explained Alexander.

"He basically decided to get out to avoid a court-martial," he said.

LGBT veterans interested in upgrading their discharges can find more information on how to do so via a website created by the U.S. Department of Veterans Affairs at https://www.va.gov/discharge-upgrade-instructions

Veterans can also seek assistance through Swords to Plowshares' LGBTQ Veterans Legal Outreach program by emailing LGBTQveterans@stp-sf.org or calling (415) 252-4788 and asking for the legal department.