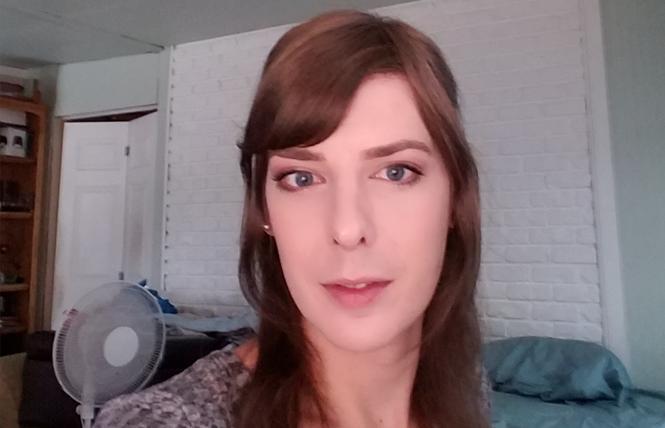 A transgender woman in California is appealing a judgment against her in a discrimination and harassment lawsuit she filed against Starbucks, even as the company released an advertisement in the United Kingdom touting its acceptance of the transgender community, and a campaign to raise money for a trans charity.

As the Bay Area Reporter previously reported, Madison Wade, 29, sued Starbucks in 2018. According to the complaint filed in Fresno County Superior Court, Wade alleged that after she came out as transgender, her manager began a campaign of harassment and discrimination against her that ultimately led to her changing branch locations and resigning from the company after nine years of employment.

The judge entered summary judgment in favor of the defendants last year, but the plaintiff filed a notice of appeal and an opening brief is due in late March, according to Wade's attorney Arnold P. Peter.

The California Court of Appeal for the 5th District will hear the case, Peter said.

Wade said her problems began in fall 2017, when she informed her manager, Dustin Guthrie, about her desire to transition.

"She was universally thought of as an excellent employee," Peter said. "People would joke about how close the two of them (Wade and Guthrie) were."

But after coming out, Wade's hours were cut. Guthrie would only refer to her with a male name and masculine pronouns, according to a copy of the complaint.

As it turned out, Guthrie "is a Christian and wanted a career in politics," according to the complaint. He expressed that he was having a hard time "wrapping his head" around the transition idea, and his social media posts show anti-trans attitudes.

"Sensing and concluding that the situation with Guthrie would only deteriorate, (Wade) was forced to seek a transfer to another location," the complaint states.

Wade was "demoralized" when, at the new location, her manager "dismissively laughed about" her being misgendered by customers, and on the advice of her therapist, Wade resigned less than one month after starting at the new location.

Fresno County Superior Court Judge Kimberly A. Gaab ruled in July 2019 against Wade. The court ruled that Starbucks, in transferring Wade away from Guthrie, had done its due diligence.

"To the extent that the working conditions under Guthrie were intolerable, Starbucks remedied the situation by granting plaintiff's request to transfer," the court order reads.

Furthermore, the court ruled that it "cannot conclude" that Wade not wanting to be referred to with male pronouns "was a request that, if not honored would result in an intolerable or hostile work environment."

The court ruled that the evidence vis a vis the reduction of Wade's hours was "vague" — Guthrie had testified that all employees' hours were cut at the end of the 2017 holiday season.
While Starbucks' internal policies prohibit intentional misgendering, these are not legally enforceable against the company, the court ruled.

"The undisputed material facts show that Guthrie's conduct did not create a subjectively and objectively hostile work environment," the court ruling states.

Wade and her attorney hold that the transgender-affirming advertisement in the U.K. is hypocritical.

"It was more offensive than anything, in my opinion," Wade said, discussing her thoughts on the ad. "It wasn't sincere. They are acknowledging what is important to transgender people and are capitalizing on it. It's hypocritical."

Added Peter: "In court the lawyers (for Starbucks) are arguing that intentional misgendering doesn't constitute harassment or discrimination.

UK advertisement
Indeed, Wade is not the only trans person who feels that the advertisement doesn't reflect how accepting Starbucks is on the inside, with BuzzFeed recently reporting that trans employees are facing deadnaming and having their requests for transition surgery denied.

In a statement to the B.A.R. February 11, Starbucks representative Reggie Borges said that the company supports the trans community.

"Starbucks has a long history of supporting the LGBTQ+ community and are proud to offer one of the most comprehensive trans health policies in the world," Borges said. "We have no tolerance for discrimination of any kind, and we have clear avenues and processes in place for any partners who feel discriminated against or harassed." (Starbucks refers to employees as partners.)

The U.K. advertisement was chosen in a contest because it "made a lot of our partners proud," Borges said.

The British advertisement is titled "What's your name."

It features a (presumably) closeted trans male being deadnamed in various social situations.

Finally, the person goes to Starbucks and orders a cup of coffee using his preferred name.

"The advert, created in partnership with creative agency Iris, was inspired by real life experiences of people who were transitioning," a Starbucks news release touting the ad states. "We discovered that they found Starbucks stores to be a safe space, where their new name was accepted, and they could be recognized as who they are."

Starbucks in the U.K. also announced it will be giving half of the proceeds from sales of the Mermaids cookie in its stores to the Mermaids charity, which is aimed at helping transgender youth. Starbucks goal is to raise 100,000 British pounds (or $129,653).