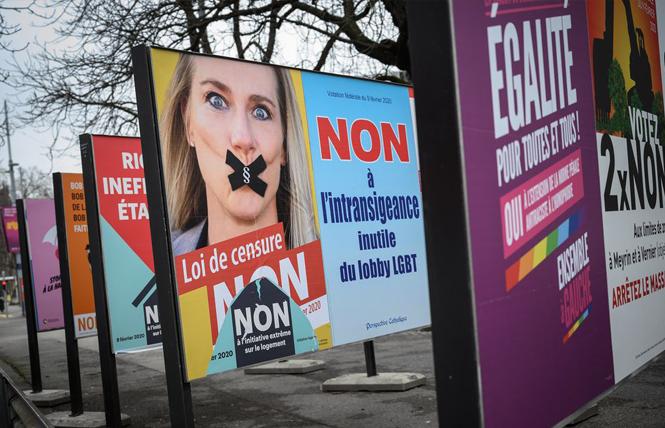 Campaign posters supporting a referendum to penalize anti-discrimination and hate crimes against gays and lesbians lined a street in Switzerland ahead of last weekend's vote. Photo: Courtesy Bloomberg/Reuters

Swiss voters passed a referendum Sunday that adds penalties for publicly discriminating against, or committing, hate crimes based on an individual's sexual orientation.

Voters "are saying unmistakably that hatred and discrimination have no place in our free Switzerland," Justice Minister Karin Keller-Sutter told the Associated Press.

The Swiss government and a majority of the country's political parties backed the referendum that will amend the current anti-discrimination law to punish anyone who publicly verbally, or physically attacks queer people.

Gender identity wasn't included in the final version of the bill, reported the New York Times. The Council of States, Switzerland's higher parliamentary chamber, rejected the wording in the clause, stating the criteria was too vague.

The anti-discrimination law was originally passed by the Swiss parliament in 2018, reported Deutsche Welle, but opponents successfully gathered 50,000 signatures to force a national referendum.

Opponents argued that to punish people's public opinions about LGB people was "counter to freedom of expression."

Experts and politicians shot down opponents' arguments, saying that the law didn't include private conversations in personal spaces. Interior Minister Alain Berset told the Times that respectable jokes about LGB people stated with human dignity would still be allowed.

The new law specifically protects LGB people from public discrimination by punishing those who publicly denigrate someone for their sexual orientation or incite hatred against someone. Those who do could be prosecuted and sentenced up to three years in prison if convicted.

The law also includes comments made in the media, such as on television and internet posts. LGB people can't be turned away from venues, such as restaurants, movie theaters, and public swimming pools simply because they are queer.

The amount of discrimination and hate crimes based on sexual orientation is still unclear. Switzerland doesn't maintain a record of reported discrimination or hate crimes based on sexual orientation. The only record of such crimes is kept by Pink Cross. It receives two calls a week from German-speaking areas of Switzerland, Muriel Waeger, a regional director at Pink Cross and LOS, two LGBT organizations, told the Times.

Waeger was also the co-director of Against Discriminations, Yes, a committee set up before the referendum.

The law will provide much needed protection for LGB people in Switzerland. Previously, hate crimes committed in public couldn't be prosecuted in Switzerland, unlike most Western European countries.

Geneva-based violence and discrimination expert and researcher Caroline Dayer wrote in an email to the Times leading up to the vote that the law would end situations such as people stating in public, "Burn the gay" or "Lesbians must be raped" due to the consequences that will be enforced.

"The extension sends a vital message to homosexual and bisexual people, and to the Swiss society overall, that hatred has no place, and that those (sic) violence are not legitimate," she added.

The SOVA Center is a nonprofit organization that tracks xenophobia and racism in Russia. This was the center's third annual report and is titled "Criminal Activity of the Ultra-Right. Hate Crimes and Counteraction to Them in Russia in 2019."

Europe
Many European nations have made significant progress protecting the rights of LGBT people and are often held up as an example and a beacon for human rights. As ILGA-Europe predicted in its report last year, the backlash against LGBT people led by public officials that "took root in a sharp rise of hate speech," was documented in the 2020 report.

Poland was the most notable country that demonstrated the strength of the political anti-gay speech that propelled the Law and Justice Party's (PiS) leader Andrzej Duda into the presidency, but it wasn't the only European nation with public officials spewing hate against gay people. Hungary also grabbed some headlines last year and Spain, often perceived as being progressive on LGBT issues, also grappled with anti-gay politicians, according to the report.

Also noted in the report were bans and violent attacks on Pride and other LGBT events and the growth of neo-Nazi demonstrators at such gatherings, as well as Britain's exit from the European Union, and the handling of LGBT asylum seekers and refugees by immigration authorities across Europe.

The report highlighted the fact that the numbers of LGBT individuals fleeing their home countries seeking safety within Europe and Central Asia continue to rise.

"It is to be expected that much more attention will have to be paid to these issues by public authorities and intergovernmental bodies in the years to come, as the needs for protection of people continue to increase," the report stated.

Transgender rights — from progressive self-determination to regressive sterilization during sex reassignment surgery — continue to be in various stages across Europe.

Work remains to be done, Evelyne Paradis, executive director of ILGA-Europe, said in the February 4 news release from the organization.

"Governments still have so much to do, from adopting laws that guarantee the protection of people's rights and giving public authorities the means to translate policy into practice across sectors, to leading by example in having a discourse promoting social acceptance and inclusion," said Paradis, who pointed out the value of the report "by making people aware of such a broad and nuanced picture, which is constantly shifting and evolving."

The report "aims to give a sense of the enormity of issues and areas that affect the lives of people, which will continue to require attention, especially in a context where LGBTI people are being targeted and vulnerability is heightened," she said.

At the same time, the researchers noted that ethnic-based hate crimes declined during the same 12-month period.

Despite suspects being detained and then released, questions remain regarding the investigation into Grigoryeva's murder among friends and relatives.

According to the report, the majority of anti-gay attacks occurred at LGBT demonstrations, events, and on the streets of some cities where individuals suspected of being gay based on their appearance were assaulted.

In addition to physical assault, the LGBT activists and organizations regularly face threats from anti-gay individuals and right-wing radicals of all sorts, including well-known St. Petersburg homophobic activist Timur Bulatov, the report stated.

However, the center noted due to the lack of official reporting of hate crimes against the LGBT community the number of assaults could be higher.

In 2013, Russian President Vladimir Putin signed the anti-gay propaganda bill. Since then Russia has experienced a spike in homophobic attacks, leading up to Chechnya's so-called gay purge launched in December 2016 that made headlines around the world in April 2017.

Payout
The same day the reports were released, Russia was ordered by the European Court of Human Rights to pay 50 Russian citizens more than $1.1 million (more than 1 million euros) for police brutality and illegal searches, according to four European human rights court rulings issued Tuesday, reported the Moscow Times.

In 2019, Russia paid out more than $9.5 million (more than 600 million rubles) to Russian citizens in compliance to the same court's similar rulings that year alone.

Milashina and human rights lawyer Marina Dubrovina were attacked by a mob of about 15 people that punched and slapped the two women in the foyer of the Hotel Continent in Grozny, Chechnya's capital city.

The assailants filmed the attack and then exited the hotel without any other damage, reported Amnesty International.

In 2017, Chechen officials reportedly abducted, tortured and killed an estimated 100 suspected gay men. Since then Chechnya, a federal subject of Russia, and Russian authorities have denied claims and ongoing waves of rounding up of LGBT people in the region despite concrete human rights reports declaring otherwise.

Since breaking the story about LGBT people being rounded up and tortured, even killed, in Chechnya, Milashina has received threats, along with other staff members of her newspaper.

Dubrovina was in Grozny for a case defending blogger Islam Nukhanov, according to Amnesty International UK. Milashina is covering Nukhanov's trial.

"This is the latest in a string of vicious attacks on vocal critics in Chechnya and is the direct outcome of such threats, coupled with the complete impunity for the perpetrators of extrajudicial executions, enforced disappearances and torture of Kadyrov's critics," Krivosheev said in a February 7 news release from the organization.

He noted that "Kremlin-appointed Chechen leader Ramzan Kadyrov openly warned he would bar human rights defenders from Chechnya and threatened them with violence."

Krivosheev called upon Russian authorities to investigate, but "so far they have clearly indicated that they have no intention of doing so," he said.

Correction
In last week's column, an error occurred in "Mumbai Pridegoers arrested for speaking out against Indian government." The article should have stated that Sharjeel Imam is the Jawaharlal Nehru University student who was arrested January 28 for sedition. The online version has been corrected.