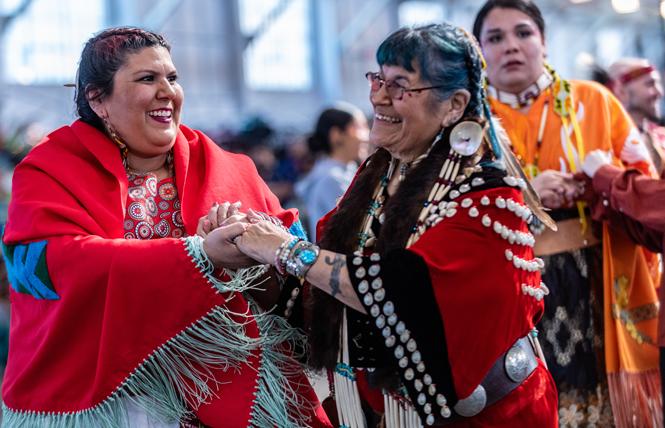 "A powwow is an intertribal event that celebrates indigenous culture through song, dance, culture, tradition, and most importantly, community," Roger Kuhn, 43, told the Bay Area Reporter in November when the documentary "Two-Spirit Powwow" aired on local television.

Kuhn, a two-spirit man who is a member of the Poarch Creek Tribe, was at the February 8 event, where he served as powwow chair.

Two-spirit is a Native American term for people with both female and male energies. They may or may not also identify as LGBTQ, a BAAITS news release noted.

The powwow was held as the city is in the process of forming an American Indian Cultural District in the Mission to help counteract displacement of the local Native population.

The proposed district would be bounded by Sanchez, 14th, Folsom, and 17th streets. The district requires the approval of the Historic Preservation Commission and the Board of Supervisors, a San Francisco Examiner article last November noted. District 9 Supervisor Hillary Ronen, who represents the Mission, introduced the measure. The area now known as Mission Dolores was once the site of an Ohlone village and burial ground, the Examiner reported.

Ronen has spearheaded the formation of cultural districts in the city as a way to preserve traditions in various communities before gentrification began.

"Cultural districts are one of the most important tools we as a city have to proactively strengthen the cultural identities of neighborhoods and communities that face the pressures of gentrification and displacement," Ronen wrote in an email to the B.A.R. "There are few communities in the country that have experienced displacement as violently and as profoundly as American Indian people, and I am proud to support this community in securing the resources necessary to help protect their cherished cultural assets."

The ordinance establishing the American Indian Cultural District will have to go before the rules committee of the Board of Supervisors, and then before the full board for a final vote. Ronen anticipates having the vote come before the board in late March or April.

At the powwow, Kuhn told the B.A.R. that he was very happy about the proposed cultural district.

"It's always important for Native people to have safe spaces to gather to share our culture, traditions, and knowledge," he said. "Visibility matters; representation matters."

The mood was quite festive at the powwow. Outside the pavilion, dozens lined up at food trucks to purchase American Indian tacos and frybread. Inside, people in traditional American Indian attire signed up for dance and drum roll contests. There were dozens of vendors on hand, selling T-shirts, ponchos, Native hats, drums, and beaded jewelry, among other items.

A sign near the entrance to the pavilion proclaimed "We love trans folks," while another sign said "Decolonize sexuality."

There was a table filled with fliers for various causes such as "return the Presidio to the Ohlone Nation," and "Save the Shellmounds," which are the ancient burial grounds of local Native people located in Berkeley.

Some people at the powwow weren't sure how they felt about the proposed cultural district.

"I have mixed feelings," said L. Frank, a 67-year-old two-spirit woman who is a member of the Tongva, Ajachmem, and Raramuri tribes. "Funny, to be given a spot of land that is yours to begin with, but at this stage of the game it's a good thing. My hopes are that the natives who are actually indigenous to Yelamu (San Francisco) have input from the beginning."

A gay man who discovered he was 18% American Indian through a DNA test favored the cultural district. "Being that the Ohlone and other American Indian people have long lived in San Francisco this district is a sign of respect that they deserve," said Bruce Beaudette, 60.

Shortly after noon, the Grand Entry took place, during which dozens of participants marched in a circle and danced. Beverly Little Thunder, a 72-year-old two-spirit woman who traveled from Vermont to participate in the powwow, and Erik Ramon, a queer two-spirit man who is a member of the Navajo and Gros Ventre tribes, were the head dancers.

"This is pretty exciting," Ramon told the B.A.R. afterward. "I've been powwowing all my life so to be able to participate in an LGBTQ+ powwow is monumental to me. To be able to represent my people and where I come from is very important to me."

The powwow continued for the next six hours and included a variety of dances and contests. Included was a dance for tiny tots (very young children), a dance for elders, a Junior contest (6-12 years), a teen contest, golden age (55+), drum performances, and a variety of dances in which people showed off their elaborate and colorful American Indian outfits. There was much applause and cheering throughout the day.

Ronald Wong, a 75-year-old gay man, told the B.A.R. that he was enjoying the powwow as he sat in the spectator area. Wong was also delighted about the proposed cultural district.

"It's great," he said. "We need to have a cultural district like that. We would want all indigenous people to express their culture in the Bay Area. After all, the first people were Native."

For more information on future powwows and other BAAITS activities, visit https://www.baaits.org/