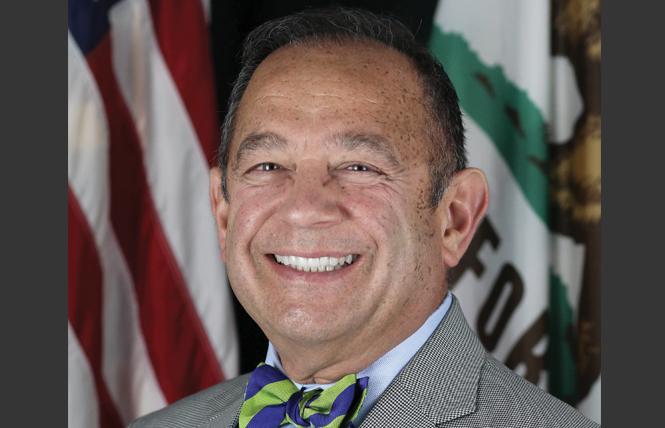 California's gay veterans affairs secretary is remaining on the job, as Governor Gavin Newsom has reappointed him to the position responsible for overseeing the state's care of its roughly 1.6 million military veterans.

Dr. Vito Imbasciani, 73, of Los Angeles, earns $217,292 a year as head of the California Department of Veterans Affairs, or CalVet for short. The urologic surgeon has served in the position since 2015, when former governor Jerry Brown first named him to the role.

Five years later, Imbasciani is believed to be the sole LGBT person heading a cabinet-level state agency, as both Newsom's office and Equality California, the LGBT statewide advocacy group, told the Bay Area Reporter they were unaware of another out state agency leader. Imbasciani's immediate boss is Cabinet Secretary Ana J. Matosantos, a lesbian who is currently the highest-ranking LGBT official in Newsom's administration.

Imbasciani is slated to speak about the appointment process for state positions at EQCA's annual summit for LGBT leaders, taking place March 13 in Sacramento. In an interview this month with the B.A.R., Imbasciani said he has no plans to retire anytime soon, either from his state government job or physician duties with the Southern California Kaiser Permanente Medical Group. Last Friday, he was conducting surgeries as he usually does twice a month depending on his CalVet schedule.

"My accountant and tax adviser are scratching their heads," joked Imbasciani about his desire to continue working. "You know they say 73 is the new 50. Not only am I blessed with good health and good genes, all four of my grandparents all approached 100 or exceeded it because of their good Southern Italian genes."

Imbasciani added that he considers himself to be "at the peak of my career both surgery-wise and cognitive abilities."

And he feels he is also at his peak in overseeing his state agency. He is responsible for ensuring the state's veterans, the most of any state, have access to the benefits and programs they are guaranteed due to their military service, from housing support and medical care to access to higher education.

"It is a mission and a sacred mission and we love it," said Imbasciani, praising his staff as well for their dedication toward serving veterans. "I have a lot of passion for it and that passion keeps me going."

"I was hired by Brown to bring the department up to snuff, if you will, and improve the veterans homes," said Imbasciani, who earned a doctor of medicine degree from the University of Vermont College of Medicine.

"It is the first time in our 73-year history of CalVet that we took a look at the existing buildings we built so we are prepared for what is coming in the future," explained Imbasciani.

The report makes recommendations for what the state should do with each of the veterans homes in the coming years as California's veteran population is expected to see significant declines as those service members from World War II and the Korean War pass away. CalVet estimates that by 2040 the state's veterans will shrink by 40% to 900,000.

"That is barring any new conflict," noted Imbasciani, which results in another wave of veterans like the previous century's wars.

Due to medical advances in treating service members injured in battle, the type of care veterans need is changing. Thus, Imbasciani has been modernizing the services offered at the veterans homes and wants to increase the number of skilled nursing beds at the facilities versus room and board beds.

"The take home message is almost paradoxical. As veterans numbers decrease, the level of the health care needs of surviving veterans — the ones coming back from the current conflict or wars of Iraq and Afghanistan — are going up," he said. "In California, veterans disability numbers are greater than the civilian population; no surprise there. But California vets have more disability issues than those of other states. I have to be positioned to care for these individuals coming out of war at a younger age and with dual diagnoses compared to WW II and Korea vets who will all have left us in the next five to 10 years."

As it stands now, CalVet has no waiting list of veterans in need of room and board beds, Imbasciani pointed out, but it does for skilled nursing beds.

"We are reorienting our veterans home system to take care of the tsunami of need that is coming toward us," he said.

When the B.A.R. spoke with Imbasciani in the fall of 2017, he had been dealing with wildfires threatening the Veterans Home of California-Yountville, which at the time housed 900 people. Luckily, the complex was spared and CalVet was able to evacuate 130 of the most vulnerable residents at the home to other nearby assisted living facilities until the fires subsided.

Following that experience, CalVet instituted updated emergency response systems at all of its veterans homes. And this month Imbasciani is hiring a person to coordinate the agency's emergency response not just for fires but also power outages, earthquakes, and any disaster that could impact the homes.

"Our homes are spread out around the state and each is at a higher risk for one or another of these disasters as well," he said.

Imbasciani also has a master's and doctorate in musicology from Cornell University and was awarded a Fulbright Fellowship to Rome, Italy to write his doctoral dissertation. He was commissioned in the Medical Corps of the United States Army in December 1986 and retired after 27 years in 2014 with the rank of colonel, having deployed four times in support of the wars in the Gulf. He also served as state surgeon for the California Army National Guard from 2006 to 2014.

After being hired by Kaiser in 1997, Imbasciani went on to serve as its director of government relations. A Democrat, he ran in 2014 for a state Senate seat but did not survive the June primary.

He and his partner, Dr. George DiSalvo, the chief financial officer at the Kaiser Foundation Health Plan, have two adopted sons who are both attending Cal State Northridge.

Serving in Newsom's administration is a special honor, said Imbasciani, as he credits being able to marry his husband to the decision Newsom made in 2004 when he was mayor of San Francisco to buck state law and order city officials to marry same-sex couples. It resulted in a yearslong court battle to win equal marriage rights in the Golden State.

"I owe him a personal debt too," said Imbasciani. "I feel like I am partially paying it forward."