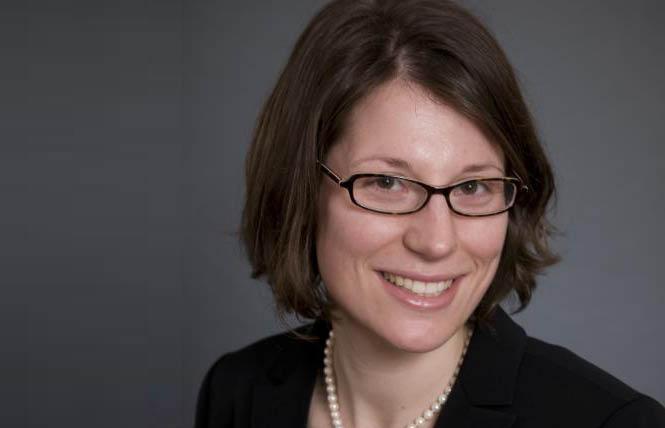 The creation of a coalition to combat a dramatic rise in sexually transmitted infections nationwide was announced February 7 in Washington, D.C.

The National STI Coalition, comprised of 17 public health organizations, paid special attention to President Donald Trump's February 10 budget rollout, and is seeking "policy opportunities" based on the appropriations, according to coalition co-chair Adriane Casalotti, who's chief of government affairs at the National Association of City and County Health Officials.

The president's budget proposal, announced early Monday, cuts funding for the U.S. Department of Health and Human Services by 10% from last year's levels, though it includes $716 million for the Ending the HIV Epidemic plan, which was announced last year.

Last year's HHS budget, in turn, was a 12% decrease from the previous year's levels, and included $291 million for the HIV plan.

"We will see what the administration proposes," Casalotti said in a phone interview with the Bay Area Reporter February 7. "Given the numbers that come out of the government, we will see how that is translating to resources and look at policy opportunities."

Stephanie Arnold Pang, Casalotti's co-chair, said that public health "programs are under-resourced and overwhelmed by the surge in STIs" in a news release that accompanied the announcement of the coalition.

"To get 17 organizations to focus on one issue is no small feat and an acknowledgement that without serious attention, this STI crisis isn't going anywhere," Pang, director of policy and government relations at the National Coalition of STD Directors, said.

The last several years have seen a dramatic rise in reported sexually transmitted diseases (STIs and STDs are similar; the former refers to the infection with a bacteria and the latter refers to diseases caused by infections).

In 2018 — the most recent year for which statistics are available — there were 1.8 million cases of chlamydia nationally, 583,405 cases of gonorrhea, and 35,063 cases of primary and secondary syphilis, according to statistics released last year from the Centers for Disease Control and Prevention.

One concerning number, advocates said, is that 1,306 cases of congenital syphilis (passed from a mother to her newborn) were reported — a 185% increase over 2014 numbers.

"There's been a lot of attention recently around maternal/child health care and we want to make sure that this increase isn't lost in that conversation," Casalotti said.

Casalotti cited many reasons for the rise in reported infections but focused on lack of enough government attention to the issue. Chlamydia rates have been rising since the mid-1980s, gonorrhea rates surged in the mid-1970s but had been steadily declining since then and syphilis rates had been in steep decline, nearing record-low levels at the turn of the millennium.

"Whenever we are doing something well in public health, it falls under the radar, but just because you don't pay attention to it doesn't mean it's gone," Casalotti said. "In times of limited budgeting, it's easy to do that. From a political perspective, it's easy for decision-makers to say 'that's a personal failing.'"

US HIV plan
The coalition is also going to be keeping an eye on the HHS' Ending the HIV Epidemic plan.

The plan aims to reduce new U.S. HIV infections between now and 2030 by 90% by directing federal funds to the 48 counties and seven states with the most new HIV diagnoses — which includes San Francisco County.

Trump referred to it in his State of the Union address February 4, saying "we will eradicate the AIDS epidemic in America by the end of the decade."

"The administration's push to end the HIV epidemic is asking communities what do they need to address the epidemic in those communities?" Casalotti said.

As the B.A.R. previously reported, while San Francisco's rate of new HIV infections is among the nation's highest, it is the lowest ever reported in the city. There were 197 diagnoses in 2018, down from 227 in 2017.

City leaders pointed to San Francisco's nationally recognized model of HIV/AIDS care and easy access to treatment, relative to the rest of the country, for the record-low number.

Nationally, the number of total HIV diagnoses largely stabilized in the 2010s, with 37,377 diagnoses reported in 2018 (a drop of 952 from 2017), according to the CDC's most recent HIV Surveillance Report.

Casalotti said the coalition is particularly concerned with the rise of antibiotic resistant gonorrhea.

Gonorrhea is typically treated with two antibiotics, ceftriaxone and azithromycin, in case one or the other doesn't work. Treatment has changed frequently through the decades, compared with other STIs, due to the gonorrhea bacteria adapting quickly to the drugs.

In recent years some cases of gonorrhea have shown resistance to those drugs, too, requiring treatment with a three-day intravenous course of the antibiotic ertapenem.

"We are seeing rates (of STIs) that are historically high," Casalotti said. "We all have other jobs, so we have created this coalition because it's the best thing to do."