Pelosi rips up Trump's State of the Union speech 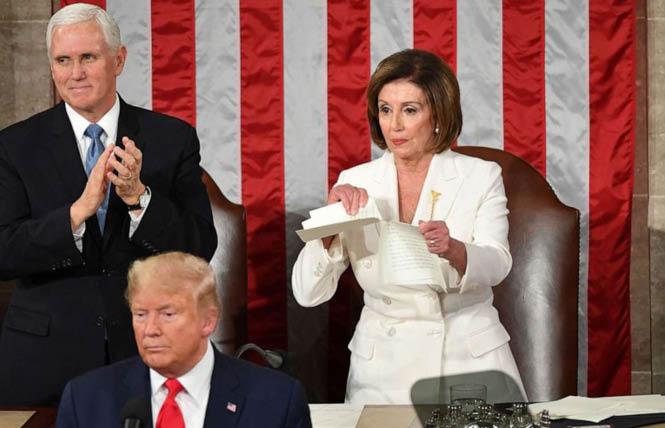 House Speaker Nancy Pelosi of San Francisco gave a Democratic response to President Donald Trump's State of the Union address unlike any other — she ripped up her copy of the speech at the end.

That may have been payback for Trump declining to shake her hand at the onset of his February 4 appearance in the House chamber, as is custom.

Trump's lengthy, campaign-style speech was sprinkled with statements that played to his base, some of which were misleading or false.

Bisexual Democratic Senator Kyrsten Sinema (Arizona) enthusiastically stood and applauded Trump's line about "our great Republican tax cuts" as fellow Senator Kirsten Gillibrand (D-New York), sitting next to Sinema, put her hand to her face and looked away. Senator Kamala Harris (D-California), who was on the other side of Sinema, sat stone-faced.

At one point Trump said, "I've also made an ironclad pledge to American families: We will always protect patients with preexisting conditions."

That drew a rebuke from gay Congressman Mark Takano (D-Riverside).

"In his State of the Union address, President Trump continued to spread lies about his record on health care," Takano said in a statement. "He claimed to support people with preexisting conditions, yet he's currently supporting a lawsuit that has reached the Supreme Court and that would dismantle the Affordable Care Act and end protections for people with preexisting conditions."

Trump's list of special guests for his State of the Union address included the brother of a bisexual high school student who died by suicide last year after he was outed on social media.

The White House news release did not mention that the high school student, Channing Smith of Tennessee, was bisexual or that he was bullied over his sexual orientation. The president did not share his story with the nation or even acknowledge his brother Joshua's presence at the event.

The president made a general statement: "Every young person should have a safe and secure environment in which to learn and to grow." And he applauded first lady Melania Trump for having launched her "Be Best" initiative, aimed at, among other things, discouraging cyberbullying and attacks through social media.

It was a decidedly anti-climactic nod in an evening that was notable for its dramatic reveals —the reunion of a soldier with his family, a scholarship award to a young student, and the presentation of a Presidential Medal of Freedom to right-wing radio talk figure Rush Limbaugh, who is battling Stage 4 lung cancer, in the middle of the formal address to the nation.

Limbaugh is better known to the LGBT community for his anti-LGBT rhetoric, including statements derisive of laws that prohibit discrimination based on HIV infection.

Trump also promised to "eradicate the AIDS epidemic in America by the end of this decade."

That stood out for Log Cabin Republicans spokesman Charles Moran, who called the speech "upbeat" and "forward thinking."

"President Trump could have gone low but he went high, and inspired the country to do the same," said Moran. "I'm heartened that, for the second time in his State of the Union address, he recommitted to the initiative to end the spread of HIV/AIDS in 10 years. We haven't forgotten, and neither has he."

Trump also said "everyone is made equal by the hand of almighty God." But he said his administration would continue "defending religious liberty, and that includes the constitutional right to pray in public schools."

"This administration has relentlessly attacked not only the LGBT community, but also women, communities of color, and religious minorities," said McGowan. "And by using tonight's State of the Union to bestow the Presidential Medal of Freedom on Rush Limbaugh, President Trump displays his utter disdain for the overwhelming majority of our country who neither look like him nor share his cynical world view."

Gay San Francisco resident Cleve Jones was Pelosi's guest for the speech. Speaking to the Bay Area Reporter before the event, he said it was the first time he'd been to a State of the Union address and he "hopes it's the last one given by Trump."

"His speech was horrifyingly cynical and cruel," Jones wrote on Facebook afterward.

Democratic presidential hopeful Pete Buttigieg appeared on MSNBC for some brief post-speech commentary. Buttigieg, who was in Concord, New Hampshire following his dramatic strong showing in Monday's Iowa caucuses, said he thought the address was "highly partisan, highly polarizing," that it appeared to be pandering to Trump's base of supporters, and that it included "some disturbing efforts ... to further divide the American people."