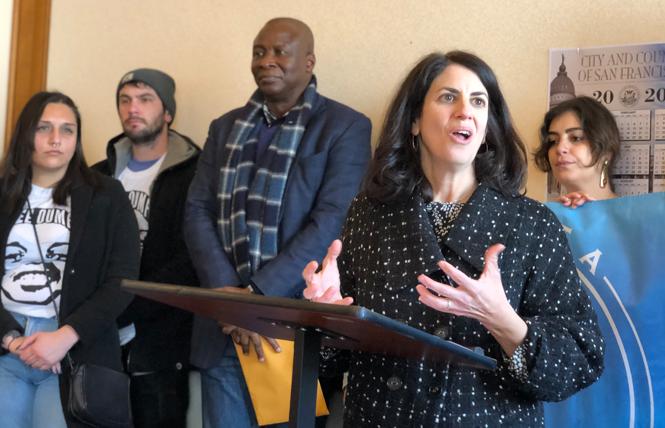 The San Francisco Board of Supervisors unanimously approved a resolution February 4 asking that the city's federal representatives and the U.S. Department of Homeland Security ensure the safe return of a gay man who a federal judge ruled had been erroneously deported.

At the same time, California Senator Dianne Feinstein (D) has called on the agency to comply with the judge's order.

As the Bay Area Reporter previously reported, Oumar Yaide, 32, was deported to Chad — a country where homosexuality is illegal — on December 1, 2019. That same month Judge Charles Breyer of the U.S. District Court for Northern California ordered that Yaide (known in court documents as Abderman Yaide) had to be brought back so that his asylum claim on the grounds of his sexual orientation could be adjudicated.

Breyer has since ruled that DHS is not in compliance with his order, and has asked that the agency appear in federal court again Friday to detail how it will return Yaide, according to Edwin Carmona-Cruz, a spokesman for Yaide's attorney, Sean McMahon.

The resolution was introduced by District 9 Supervisor Hillary Ronen, who represents the Mission district — which Yaide called home — on the board.

"Oumar is my constituent," Ronen said at a City Hall news conference prior to the board meeting Tuesday afternoon. "He was a resident of the district, where he contributed to the community with volunteer work for various organizations.

"The stakes here are extremely high because every additional day Oumar spends in Chad, he faces jail, violence, or even worse," Ronen added.

Also speaking at the news conference were friends of Yaide, including Haley Kay, an Oakland woman who has known Yaide for about five years.

Kay said that the fundraiser she helped organize for Yaide January 31 at the LGBT bar El Rio in the Mission district went "really well," though she and friends are still trying to put together how much money was made.

"Just under 100 people were there," she said. "It was a great turnout. The bands were great. I think we'll have another before Oumar comes home to scrape funds together. We need an additional $5,000 for a cushion for him. So far we've raised $2,000 of that."

Kay said that the $14,000 that had previously been raised for Yaide had not all been spent, and much of it was going to pay his rent.

Barrett Edmonds, another friend of Yaide's, was also at the news conference. They worked together at the Wooden Nickel, a Mission district bar.

"He was taken in the dead of night," Edmonds said. "They deported his ass in the middle of the night. He's a good person."

Chehrzad Shadman, another friend of Yaide's, added that Yaide was an "asset to the community."

The resolution urges Feinstein, Senator Kamala Harris (D-California), and House Speaker Nancy Pelosi (D-San Francisco) to help ensure that DHS returns Yaide to the U.S., according to a copy of the resolution provided to the B.A.R. by Ronen's office.

During the board meeting, Feinstein's office released a letter that she sent to acting DHS Secretary Chad Wolf calling for the agency to comply with the court order.

"Further delay exposes Mr. Yaide to serious risk. Any action taken by DHS to force Mr. Yaide to contact the government of Chad to facilitate his travel puts his life in danger," Feinstein's letter states. "Simply put, DHS must comply with the court order and return Mr. Yaide to the United States as soon as possible. I appreciate your prompt attention to this matter."

As the B.A.R. previously reported, friends of Yaide delivered a petition with almost 30,000 signatures asking for Yaide's return to Feinstein's office January 21.

The news conference replaced a proposed rally outside City Hall that was being considered by Kay.

At the time of his arrest by ICE, Yaide was working at a restaurant and lived in the Mission, Kay said. He was held in Yuba County Jail (outside Sacramento), which contracts with Immigration and Customs Enforcement to hold people in the U.S. without legal permission.

Carmona-Cruz urged DHS to comply with the ruling as soon as possible.

"Neither DHS or this president of the United States is above the law," he said at the news conference. "This is why it's extremely important that the Board of Supervisors vote unanimously on this resolution."