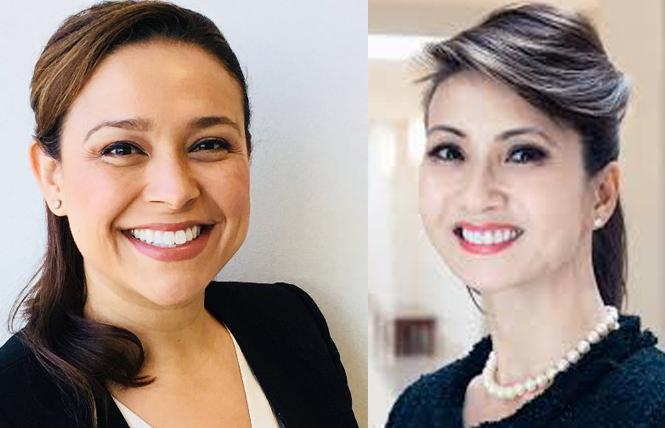 Six female attorneys — all straight allies — are competing for the three open judicial seats on the San Francisco Superior Court that are on the March 3 primary ballot. Retiring judges are vacating the seats up for election.

In the East Bay, three attorneys — two of whom are LGBT — are also on the March ballot. They are vying for one seat on the Alameda County Superior Court being vacated by Judge Carol Brosnahan, 84, who is retiring after 40 years and who runs the county's behavioral health court.

All of the candidates except one completed questionnaires that the Bay Area Reporter sent them as part of the newspaper's election coverage.

SF Seat 1
Maria Evangelista, a deputy public defender, is running for Superior Court judge seat No. 1 against Pang Ly, a commissioner pro tem for the court.

This isn't Evangelista's first time running for a seat on the bench. As the Bay Area Reporter previously reported, Evangelista was one of four public defenders who challenged sitting judges on the Superior Court two years ago.

The quartet charged that the judges should be voted out of office because they were "Republican appointees." While Republican governors appointed them, all four of the judges were registered Democrats. All of the judges won their reelection races.

David Campos, a gay man who serves as the chair of the San Francisco Democratic Party, said in a phone interview that the local party endorsed Evangelista this time, although it did not in 2018 when she was challenging Judge Curtis Karnow.

"When I did consider her last time, I thought this was a very impressive person. But for the fact that she was running against a sitting judge, I would've voted to endorse," Campos, a former San Francisco supervisor, said. "For me this time there was no question we'd give her serious consideration."

Evangelista, 44, told the B.A.R. that she is a native San Franciscan whose mother was deported to Mexico while she was in utero and her dad had to voluntarily depart to bring her back. She said the LGBTQ community has inspired her political activism.

"Upon return they sought refuge from INS (United States Immigration and Naturalization Service, now called U.S. Citizenship and Immigration Services) in an apartment building in the leather community, only two blocks from the Hall of Justice," Evangelista wrote in her questionnaire, referring to her parents. "I was born and raised in a studio apartment in a building that was almost exclusively gay men. We were each other's surrogate families. I had so many firsts in this community and then I lost so many of them in the 1980s to the AIDS crisis."

When asked what changes she would make to the court, Evangelista responded that her presence would put the bench "in touch with the community it serves" and she would "bring her unique perspective as a woman, Latina, and daughter of immigrants" to the court.

Ly, 46, is an immigrant herself, having come to the U.S. from Vietnam. She's been endorsed by numerous current and former Superior Court judges, five Democratic clubs, and by Assemblyman David Chiu (D-San Francisco).

"I developed and implemented a groundbreaking program to resolve asbestos cases that had overwhelmed our court," Ly wrote in her questionnaire. "Having proved my effectiveness in the asbestos cases, I now work with the parties and their counsel to settle the full range of civil matters."

When asked what changes she would make to the court, Ly wrote that she could not answer policy questions due to the California Code of Judicial Ethics, but added "my personal and professional experiences demonstrate my deep commitment to an independent and fair judiciary for all." 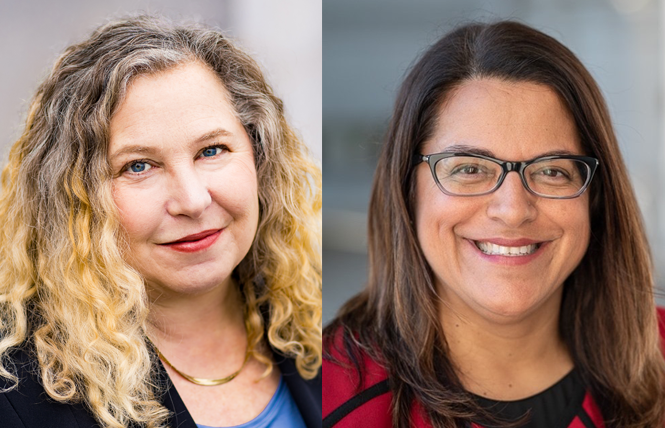 SF Seat 21
Carolyn Gold, director of litigation and policy for the Eviction Defense Collaborative, is running against Kulvindar "Rani" Singh, an assistant district attorney, for Superior Court judge seat No. 21.

"I have tried eight cases and have trained over 500 attorneys in eviction defense law," she wrote in her questionnaire. "I have worked tirelessly on behalf of tenants in San Francisco for 30 years."

When asked what changes she would make to the court, Gold said she would try to find ways to better distribute resources to meet the needs of San Franciscans.

For example, the Access Center helps people without lawyers, but it "has reduced hours of operation due to budget cuts," she wrote.

"The court should be more transparent in its decision making process with regard to how judges are assigned and how resources are allocated," Gold added.

Gold was endorsed by the San Francisco Democratic Party, BALIF, and the Milk club.

"This was a difficult one and there were two strong candidates on the table," Campos said. "What tipped it for me was that diversity is important not just in background, but in experience. Landlord/tenant is a very complicated area of law and (Gold) would be the first attorney from that field to be elevated in the city."

BALIF declined to discuss its specific endorsements, citing the confidentiality of the internal workings of its judicial committee.

But Mandy Chan, the co-chair of the committee, said that the organization endorses candidates who embody "the values BALIF seeks to promote — commitment to diversity and equal justice — and obviously, they have to be qualified and have a good reputation."

Singh, 46, is a native San Franciscan from the Sunset. She has been an assistant district attorney "for over two decades" and has "created educational programs, mentored students and lawyers, and participated in nonprofit work and community engagement at every level for decades in this city," she wrote in her questionnaire.

When asked what changes she would make to the court, Singh wrote that she has "many ideas to improve on access to services, transparency issues, and issues that will support criminal justice reform."

She added that judges need to be more visible figures in the community.

"Once judges run and successfully win their seat, they are rarely heard from in the community," she wrote. "I can say from the perspective of a busy working career mom, I thrive on the extra community service that I participate in.

"There are a plethora of options that do not involve political issues," Singh added. "The bench should not be so separated from the rest of the community." 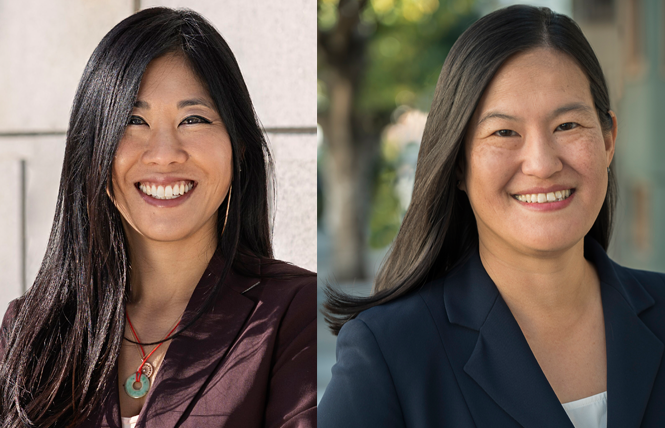 SF Seat 18
Michelle Tong, a deputy public defender, is running against Dorothy Chou Proudfoot, an administrative law judge with the San Francisco rent board, for Superior Court judge seat No. 18.

BALIF and the Alice club did not make endorsements in this race, but the Milk club and the DCCC endorsed Tong.

Tong, 45, is the daughter of immigrants from Hong Kong and has been a deputy public defender since 2004.

When asked what changes she would make to the court, she discussed how the money bail system — recently abolished by new San Francisco District Attorney Chesa Boudin — is "the most egregious inequity of our justice system."

She also said that judges need implicit bias training, and that juries need to be more diverse.

"Over policing and the disparate prosecution, conviction, and imprisonment rates of people of color, especially African Americans, are the direct result of explicit and implicit bias which reinforces the systemic racism that pervades the criminal justice system and every other aspect of American society," she wrote.

Proudfoot, 45, said she has "successfully made the transition from advocacy to neutrality" in her role on the rent board. She served on the Amicus Committee of California Women Lawyers, where she "reviewed amicus briefs on such issues as same-sex marriage, Title IX discrimination, transgender protections, and the contraceptive care mandate," she wrote in her questionnaire.

Proudfoot joined Tong in calling for greater representation of minorities in the justice system.

"I feel a significant responsibility as a woman of color to forge a path for other women of color in the law and in public service," Proudfoot wrote.

Campos said he is glad that the candidates endorsed by the San Francisco Democratic Party are not who would normally be selected as judges by their fellow attorneys.

"We are very proud of these endorsements," Campos said. "Lawyers tend to be conservative in terms of who they consider or not to be judges — big firms, prosecutors. The DCCC has opted to select excellent lawyers who in the normal appointment process wouldn't be considered." 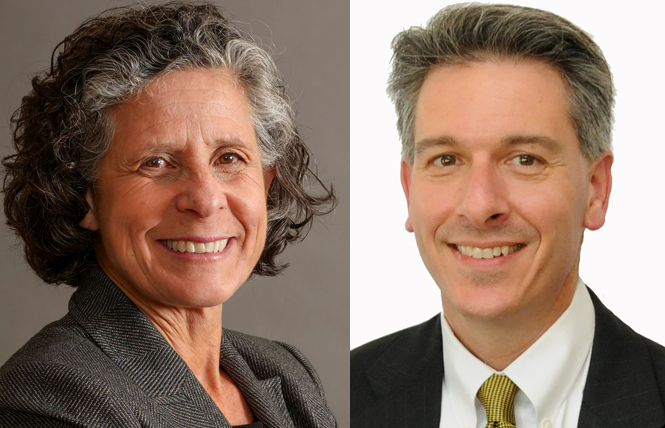 East Bay race
In Alameda County, two of the three attorneys vying for a seat on the bench are out.

Elena Condes, 57, is a Latina lesbian and a longtime criminal defense attorney.

"In this time when being 'other' is under attack I want the opportunity to take my commitment for equality to the court," Condes wrote in her questionnaire. "I worked to bring up the next generation of Latinx lawyers and promoted Latinx attorneys to move to the bench."

When asked what she would change to the court, Condes said she would "work toward implementing restorative justice principles into the system," such as bail reform and "expanding the collaborative courts."

Condes has been endorsed by the East Bay Times.

Mark Fickes, 53, is a gay man. He wrote in his questionnaire that when he started practicing law "I could count on one hand the number of openly LGBTQ+ judges in the Bay Area."

"While there has been tremendous progress over the past two decades, there is still room for improvement," he added.

When asked how he would change the court, he said he would improve access to representation.

"Many of our most vulnerable citizens find themselves unrepresented in family law matters and unlawful detainer actions," he wrote in his questionnaire.

Fickes has been endorsed by the Alameda County Democratic Party.

BALIF endorsed both Fickes and Condes.

The East Bay Stonewall Democratic Club, an LGBT-focused organization, did not make an endorsement in the race.

Lilla Julia Szelenyi, a straight ally, is the third candidate in the race. She declined to return her questionnaire, writing that she was not seeking the paper's endorsement. She has been a worker's compensation administrative law judge since 2005. Born in communist Hungary, her father was a political prisoner, according to her campaign website.

She was endorsed by former Congressman and former state Democratic Party chair John Burton and state Board of Equalization Chair Malia Cohen, a former San Francisco supervisor.
For more information, go to https://www.elenacondesforjudge.com/, https://www.fickesforjudge.com/, and https://www.lilla4judge.com/