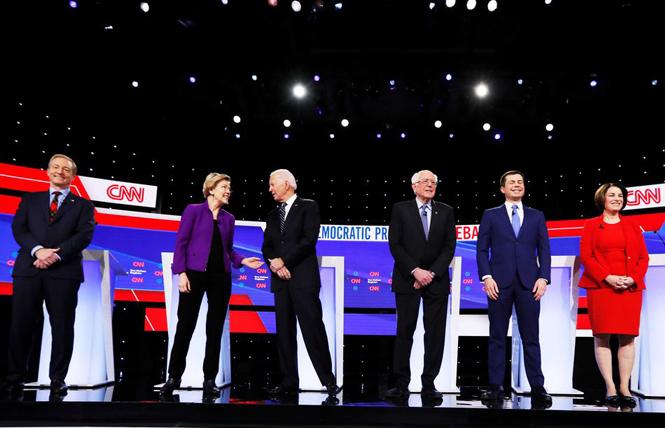 No one predicted a year ago that gay former mayor Pete Buttigieg would be a serious contender in the Iowa caucuses this year, but February 3 is Monday, and there he is: polling second and third in two out of three of the latest Iowa polls. Ditto for the February 11 New Hampshire primary: Buttigieg is polling second in one poll, third in another. He's third among Democratic candidates in terms of money raised.

But no one's predicting the outcome of Monday's caucuses in Iowa or the first primary voting in New Hampshire because the polling positions have been shifting quickly and frequently, endorsements have been scattered, and a most recent poll in Iowa shows as many as 13% of likely caucus-goers say they are still "undecided." Many political observers, including the polling analysis site http://www.fivethirtyeight.com, call Iowa a "four-way race."

"How unusual is it for the field to have this many candidates within a few points of each other?" asked fivethirtyeight analyst Geoffrey Skelley in a January 28 article. "It's pretty unusual."

Buttigieg
Buttigieg is not only still standing, he polled second in the latest New York Times survey of 584 "likely voters" for the Iowa caucuses. The margin of error (3 points either way) essentially showed a four-way tie, with Sanders at the top (25%), Buttigieg (18%), former Vice President Joseph R. Biden Jr. (17%), and Warren (15%).

"We do not do this simply because Mayor Pete is a gay man and this is a gay paper," wrote publisher Norm Kent of SFGN. "We do this because he is a good man seeking to do great things. Of course, he will have the best interests of the LGBT community in his heart, but he has the spirit of America in his soul."

No other LGBT news outlet has yet to make an endorsement.

But the numbers also show Buttigieg has won a wide range of supporters. Voters see him as the second most intelligent candidate (behind Warren), they seem to appreciate his having served in Afghanistan, and his willingness to share how his religious beliefs inform his approach toward people and policy.

Oddly, polls, debates, and interviews in the last several months have steered almost completely clear of questions asking whether Buttigieg's being gay has an impact on voters' preference for a Democratic nominee. The campaign made highly visible use of Buttigieg's spouse, Chasten, through much of 2019, but that visibility appears to have toned down in recent weeks. In the rare instance when a news account reminds voters that Buttigieg is gay, they almost always group the notice with some other characteristic, noting he is "gay and a veteran" or he is "young and gay."

In fact, he is publically challenged about his relative youth (he just turned 38) much more than his being gay. Buttigieg has tried to turn his youth into an asset by arguing that it motivates him to seek more forward-thinking solutions, rather than quick fixes. But critics then point out that his youth has given him little opportunity to prepare for a job as enormous as the presidency.

As the Wall Street Journal pointed out in November, "his rhetorical gifts, distinctive resume and fund-raising prowess" is struggling to overcome the fact that "his government experience is limited to running South Bend," a small city in Indiana. To win re-election, he needed only 8,500 votes.

Warren
The senior U.S. senator from Massachusetts has, along with Buttigieg, been one of the top two Democratic candidates favored by LGBT activists and leaders. And, like Buttigieg, she has lately been lagging in the polls behind Sanders and Biden in Iowa and New Hampshire. But the most recent polls, conducted January 23-26, do not register the big boost she got January 25 when the Des Moines Register, Iowa's mainstay newspaper, endorsed her. Nor do they likely reflect the full impact of the New York Times endorsement January 19 of her and U.S. Senator Amy Klobuchar (Minnesota).

Warren has been an unabashed advocate for equal rights for LGBT people and won a perfect 100 score from the Human Rights Campaign in her two sessions in the Senate. Although she opposed funding for gender transition surgery for prisoners in 2012, she has since called that a mistake and said "the cost of inequality for transgender people, particularly transgender women of color, is now a moment of crisis."

Sanders
Sanders, who is identified in the Senate as an independent, is a Democratic socialist and currently the frontrunner for the Democratic presidential nomination, according to two out of three of the latest polls in Iowa and the three most recent in New Hampshire.

Although he has spoken publicly in support of gay men and lesbians since running for mayor of Burlington, Vermont, in 1972, he's done less than other top tier Democrats to entice support from the LGBT community during his campaign for president. And just last week, he possibly discouraged such support by tweeting out a photo and a "I think I'll probably vote for Bernie" comment by Joe Rogan, a podcast figure who traffics in anti-LGBT insults, particularly toward the trans community.

"It is disappointing that the Sanders campaign has accepted and promoted the [Rogan] endorsement," Human Rights Campaign President Alphonso David said in a statement. "The Sanders campaign must reconsider this endorsement and the decision to publicize the views of someone who has consistently attacked and dehumanized marginalized people."

Sanders also tweeted out that he was "very, very proud" to have the endorsement of gay Congressman Mark Pocan (D-Wisconsin). The Twitter post included a video of Sanders and Pocan together with Sanders announcing that Pocan would chair the Sanders campaign in the Badger State. He's also earned the endorsement of the Harvey Milk LGBTQ Democratic Club in San Francisco.

Sanders' campaign website, wwwberniesanders.com, boasts a specific LGBTQ+ "plan," and discusses in great detail the inequalities that LGBT people face. For instance, he notes that the average income for a gay man is $56,936, and for a lesbian is $45,606, while it is $83,469 for a heterosexual man and $51,461 for a heterosexual woman.

Biden
The former vice president is running first in all the national polls. The latest, by Quinnipiac University,
has him 5 points ahead of Sanders among Democratic and independents who lean Democratic. Biden has 26%, Sanders 21%, Warren 15%, Bloomberg 8%, Klobuchar 7%, and Buttigieg 6%. And voters believe Biden has far and away the best chance of defeating President Donald Trump. In the Quinnipiac poll, 44% said so. By comparison, the closest competitor was Sanders with only 19% saying he could beat Trump. Only 7% said Warren had the best chance of beating Trump; only 2% said Buttigieg does.

In a speech to HRC's national dinner in Washington last June, Biden promised that, if elected president, getting passage of the Equality Act "will be the first thing that I ask to be done." Last week, he called transgender equality the "civil rights issue of our time." But his campaign does not include an LGBT-specific policy plan on its website, www.joebiden.com, like the other candidates' websites do.

In his first Congressional Scorecard grade from the Human Rights Campaign, then-Senator Biden earned a perfect 100. The following two sessions, he scored only a 63 and a 78. Biden is one of many senators who voted for the anti-gay Defense of Marriage Act and "Don't Ask, Don't Tell" bans, then later opposed them.

His support for LGBT equality really began to solidify while serving as vice president under President Barack Obama. He was widely credited with prodding the Obama administration toward supporting marriage equality.

Other candidates
Bloomberg, the former mayor of New York City, threw his hat and his considerable money into the Democratic presidential ring in late November. This week, he announced on a telephone press call that he was releasing his "LGBTQ+ Equality Policy" (www.mikebloomberg.com). He has gotten impressive traction very quickly: He polled at 8% among national registered voters in the just-released Quinnipiac poll — two points ahead of Buttigieg, who has been campaigning since January 2019.

Klobuchar (www.amyklobuchar.com) has begun to show some signs of climbing out of the single digits. She polled ahead of Buttigieg and Warren in the latest Iowa poll, with 13% compared to Warren's 11 and Buttigieg's 10. And she pulled 10% in a recent ABC poll in New Hampshire, just behind Warren and Buttigieg.

Seven candidates have qualified thus far to participate in the next national presidential debate among Democrats. In addition to the top four (Biden, Sanders, Warren, and Buttigieg), they include Klobuchar and businessmen Tom Steyer and Andrew Yang. The debate will be held February 7, just four days after the Iowa caucuses and four days before New Hampshire voting.