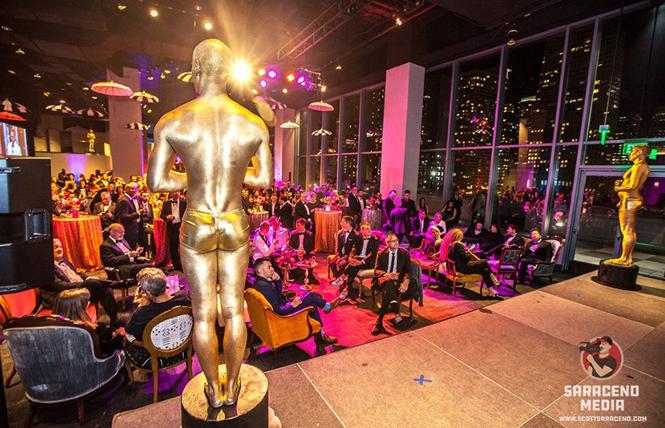 Gold "Oscar guys" have been a staple at Academy of Friends Oscar galas, where last year a couple of them overlooked the crowd. Photo: Scott Saraceno

The Academy of Friends, which holds its Oscar viewing party in San Francisco, has announced a long-term partnership with the LGBT Asylum Project, a nonprofit organization that provides legal services to immigrants who are fleeing persecution due to their sexual orientation, gender identity, and/or HIV status and seeking asylum in the U.S.

According to the new agreement, announced January 18, the asylum project will receive the proceeds from AOF's annual Academy Awards Night Gala, which has distributed over $8.9 million to more than 74 HIV service agencies in the Bay Area over the past 40 years.

The partnership will be formalized later this year, AOF board chair Michael Myers wrote in an email to the Bay Area Reporter. Myers told the B.A.R. in a phone interview that AOF estimates this year's charity proceeds at $50,000.

The asylum project will be the beneficiary this year.

The gala will be held Sunday, February 9, at the Commonwealth Club's swank new headquarters, a waterfront venue with spectacular views of the Bay Bridge.

This year's theme is "Ruby Red Gala" as it's AOF's 40th anniversary. The evening includes an international dinner buffet as well as wine, champagne, and spirits. A silent auction offers gift certificates for dining and travel as well as artwork and a variety of merchandise. Fifteen large screens will be broadcasting the Oscar telecast all evening.

Discussing the organization's mission, LGBT Asylum Project co-founder and Executive Director Okan Sengun said in a statement, "We're fortunate because we live in a country that has readily available drugs, and we live in a city where it's no big deal to be gay. ... And that's why so many immigrants living with HIV come to this country."

Sengun noted that homosexuality is still illegal in 75 countries; it is punishable by death in 13.

According to Sengun, the organization helped 136 LGBTQ immigrants in 2019. Between 2016 and March 2019, the asylum project helped more than 250 people, and that was without office space, he added. (The organization opened its office in the Castro last May.)

In March the LGBT Asylum Project will have a kiosk at its office to assist people in filling out their 2020 census form. It is one of 10 regional LGBTQ census assistance kiosks local community groups will be staffing in coordination with the statewide LGBT advocacy group Equality California.

"The LGBT Asylum Project is not simply the beneficiary, Academy of Friends is arguably the actual beneficiary of this new relationship," he stated. "It's a brilliant way to take what remains of AOF, and the legacy of good on which the organization rests, restore its integrity, focus its efforts, and enjoin it on a path that's eminently relevant and embraceable today."

Ozier noted that gala attendance in recent years "has wavered as the public has lost focus on how critical the fight against HIV/AIDS still is."

AOF has also had its share of stumbles, most notably about a decade ago. As the B.A.R. reported in 2012, the benefitting organizations in 2010 and 2011 received only a fraction of the money they were expecting. The paper also reported that AOF had initially said it would distribute a combined $220,000 to the 11 organizations but in May 2011, AOF representatives told beneficiaries they were backing out of paying what they owed. About $150,000 had remained to be paid at the time.

Current board chair Myers, who was not in the position at the time, did not want to talk about the past.

"We will not address this in the article at this time ... this will not be a gossip article and if you editor insists, you will be publishing without our authorization and no authority to quote," Myers wrote in an email.

Tickets for the AOF gala are $275, with a new, low-cost ticket price of $150 for young professionals ages 21-29. Attendees must be 21 and over. Doors open at the Commonwealth Club, 110 The Embarcadero, at 4 p.m.; the event starts at 5. For more information and tickets, go to http://www.academyoffriends.org/

For more on the AOF Oscar party, see BARtab.

Popular SF Oscar party scrapped due to pandemic
Sign up!