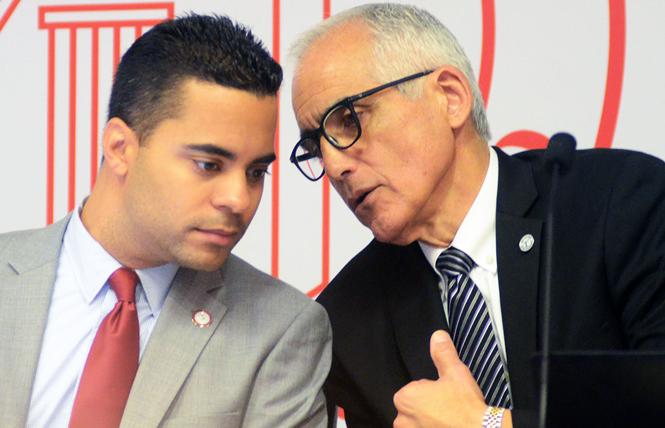 City College of San Francisco has a new gender diversity and inclusion policy designed to protect transgender and gender-nonconforming students and staff who said they were mistreated.

The new policy unanimously passed the San Francisco Community College District Board of Trustees — which oversees City College — at its January 23 meeting. As the Bay Area Reporter previously reported, (https://www.ebar.com/news/news//285680), it had been introduced at the board's December 12 meeting.

"The passage of this policy is a proud moment for City College," said Tom Temprano, a gay man who is the vice president of the board. "This new board policy continues our important work to make City College a truly safe and supportive place for trans and gender-nonconforming people to learn and work. That said, we still have a long way to go toward that goal and my hope is that we will implement this policy effectively."

The new policy — which allows a formal complaint process for those who believe they were mistreated — comes on the heels of other changes at City College to improve the environment for trans students and staff, including a chosen name system and gender-neutral bathrooms, Temprano said.

The policy would make the use of chosen names mandatory except for certain financial and legal documents. It also would make it against school policy to willfully misgender people, and also protects two-spirit-identified students and faculty, according to a copy of the proposal.

People will be able to make complaints with the district, via either a formal or informal process, according to a copy of the policy, and those objections would go through the normative process for discrimination complaints.

The words "assigned sex at birth" no longer appear in City College policy and are crossed out on a copy of the new document.

Alex Randolph, a gay man who had served as president of the board, agreed with Temprano in hailing the passage of the new rules.

"I'm very excited and proud that the board approved and voted to implement this new policy," Randolph said in a January 24 phone call to the B.A.R. "It's a long time coming and our various stakeholders put a lot of work in crafting this."

Among those collaborators were the City College Queer and Trans Inclusion Project — school employees who had been seeking a change in policy after a series of transphobic incidents at the college. The project took the initiative at crafting the new policy, according to Temprano.

Members of the project included Jennifer Carlin, who identifies as bigender and queer and is the chair of the behavioral studies department at City College; Pau Crego, a trans person who is director of policy and programs at the city's Office of Transgender Initiatives; and Jesse Kolber, a transgender man who is a sociologist with City College.

"This is a great step for City College and it's a necessary step," Kolber said while advocating for passage of the new policy at last month's meeting when it was presented to, and discussed at, the board. "We have to ensure our commitment to battling transphobia and cisism where it exists in our society."

At that same meeting, Temprano explained the need for the new policy, saying that transphobia should disturb all members of the City College community.

"There was a student who was deadnamed in the library system. I've heard of students being subject to transphobic discussions while in class. I've heard faculty members whose legal names were shared widely with colleagues during department chair elections. I've seen photos of defaced gender-neutral bathroom signs at a number of our campuses," Temprano said. "This is not the safe space that City College ought to be."

Randolph said that he hopes aspects of the newer, more trans-friendly policies at City College will be "exported to other institutions," specifically mentioning Assembly Bill 711.