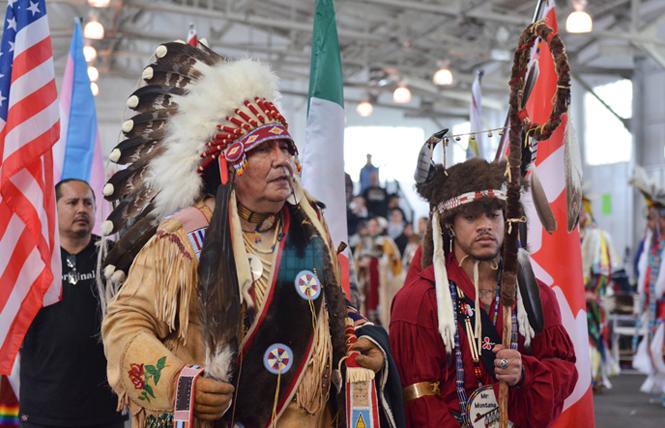 Featured dancers will make their grand entry at noon.

Organizers noted that a powwow is a traditional Native American event that gathers all tribes, as well as inviting non-Native guests, to learn more about Native cultures. Last year the event welcomed more than 5,000 people and a larger crowd is expected this year, according to a news release.

The powwow features several hours of ceremonial honor dances, contest dances, and a drum contest. The release stated that all powwow dancers and drums are welcome.

"This is a space for all of us to gather respectfully and celebrate Native traditions," BAAITS board Chair Amelia Vigil stated. "Whether you are African American, Native American, white, gay, straight, transgender — whoever you are and wherever your roots originated, come with curiosity and kindness."

"Two spirit" is a Native American term for people with both female and male energies. Two spirits may or may not also identify as LGBTQ. Traditionally, two-spirit people often held — and many still hold — honored positions in their Native American and First Nations communities.

The event is free and open to the public. Donations will be accepted at the door. Vendors will be on site selling frybread, buffalo burgers, Native art and jewelry, and other crafts.

Organizers noted that the powwow is a clean and sober event. Street attire is encouraged for non-Natives. No costumes allowed. The event is wheelchair accessible.

Bi confab at SF LGBT center
The San Francisco LGBT Community Center is sponsoring BiCon, a conference and party centering on people who are attracted to more than one person.

Sunday's conference, which takes place in Oakland, is sold out.

A flier stated that the bi, pan, queer, and non-monosexual communities are overdue for a space where they are the center and focus. For more information, visit the abovementioned website.

Jackson is the producer behind Harvey Fierstein's "Torch Song" on Broadway, plus Emmy- and Golden Globe-nominated TV shows such as "Nurse Jackie."

In "Gay Like Me," Jackson revisits key LGBTQ events such as Stonewall, the HIV/AIDS crisis, and the fight for marriage equality to offer his oldest son Jackson — who came out as gay at 15 — a touching and practical guide for living life safely as an openly gay man.

Tickets are $10 or $30, which includes a copy of the book. For more information and to purchase tickets, visit www.welcometomannys.com

The event is to observe National Black HIV/AIDS Awareness Day.

The evening will feature a discussion and panel about the black experience, HIV, and stigma through an intergenerational lens.

There will be food and refreshments, along with free HIV and sexually transmitted infection screening.

The program will include a live, interactive audience and be livestreamed on the club's YouTube channel in hopes that it will benefit black trans women across the country.

Tickets are free for members, $5 for nonmenbers, and $3 for students (with valid ID) and available at https://bit.ly/2O4lGuO

There will be an artist panel from 7 to 7:30 p.m., followed by a reception and print sale. Admission is free.

The exhibit at Strut, located at 470 Castro Street, runs from February 8 to May 9.

For more information, visit the Facebook page at https://bit.ly/2GlmHuk