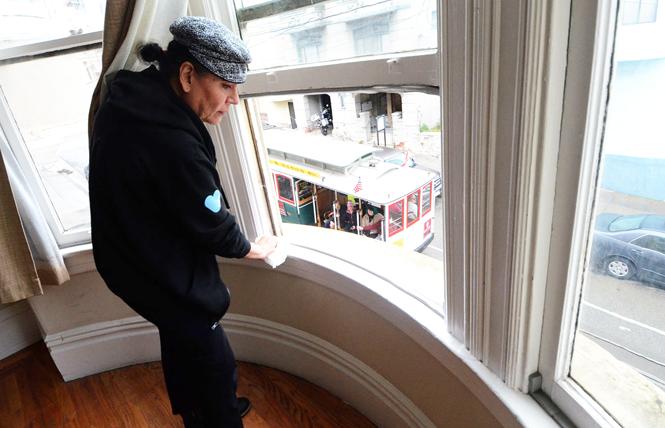 Come February Jane Cordova will move out of a shelter for LGBT adults in San Francisco's Mission district for her own room in a Chinatown apartment. The scalloped windows in her bedroom will look out onto the city's famed cable car line, which stops mere feet away.

Cordova, 60, a transgender woman, is the first resident selected for the Trans Home SF on Washington Street, the city's first transitional housing program for transgender and gender-nonconforming adults. The program aims to provide apartments for 12 individuals age 25 and older who will be able to live rent-free for a year as they receive support in landing a job, enrolling in school, and saving money to move into their own apartment.

Tuesday afternoon Cordova saw her new temporary home for the first time and quickly got to work cleaning the windows in her bedroom and the baluster railing atop the stairs. The second-floor railroad flat has been divided into four bedrooms with a living area, kitchen, and one and a half bathrooms.

"I think it is great. I love the location," said Cordova, who grew up in Mexico and moved to San Francisco in the early 1990s.

Stuck in the country's immigration system, Cordova has struggled to find employment and affordable housing. A volunteer with the nonprofit El/La Para Trans Latinas, she is training to be a chef and hopes to be hired by a local restaurant one day.

"I like to cook," said Cordova, who plans to oversee breakfast and dinner for her new housemates as she will serve as the resident manager. "I am the mother of the house."

City officials and community leaders will cut the ribbon for the new transitional housing for transgender and gender-nonconforming adults Thursday, January 23. The first eight residents moving into two of the building's apartments should be settled in by mid-February. Another four residents could move in this summer, as the third apartment in the building should become available.

The project is being funded through a $2.3 million allocation for the Our Trans Home SF initiative, which is also being used to provide rental subsidies to transgender and gender-nonconforming individuals. The Board of Supervisors and Mayor London Breed split the funds between the city budgets for the current fiscal year and the fiscal year ending on June 30, 2021.

"Every day our trans community struggles to find affordable and inclusive housing. Despite [President Donald] Trump's ongoing attacks San Francisco continues to have some of the strongest non-discrimination protections, although our ongoing housing crisis continues to impact our diverse community," stated Breed. "With one out of every two transgender San Franciscan having experienced homelessness, we knew we had to take bold steps to fix these inequities. I am honored to join the coalition to launch this first-of-its-kind program because everyone deserves a safe place to call home."

The lead agencies overseeing the trans home program are Larkin Street Youth Services and St. James Infirmary, the health clinic for sex-workers and other individuals. St. James is responsible for the transitional housing program, selecting the residents and hiring a social worker and two housing navigators who will work with them on-site.

"It is not fully ready but it will be by February," said Toni Newman, St. James' executive director and administrator of the new initiative, as she gave the Bay Area Reporter a sneak peek of the property Tuesday afternoon.

It is roughly a 15-minute walk to St. James Infirmary's offices in Polk Gulch. The agency asked that the exact address for the housing not be disclosed to protect the privacy and safety of the residents.

The property is owned by a gay man and his partner, whom Newman said wishes to remain anonymous. They offered the apartments to the city program for slightly less than market value, she said, estimating the rent per person averages out to between $1,500 to $1,600 a month. The landlords expect that the current tenant of the third-floor apartment in the building will not renew their lease this spring and have offered to rent it to the trans initiative.

"This is nice. This is a nice home," said Newman, who signed the leases for the first and second floor apartments last week.

Clair Farley, director of the city's Office of Transgender Initiatives and an adviser to Breed, learned about the apartments last fall, said Newman. The two women, who are both transgender, first toured the building in September and they immediately thought it would be the perfect location.

"This vital program will save lives and provide safe shelter as our community continues to face attacks from Washington and ongoing rollbacks of Obama era LGBTQ protections. We can make real progress to help end trans homelessness in our city," stated Farley.

The apartments, which have mirror floor plans, feature wood floors throughout and original moldings and other decorative details. In the second-floor flat, the right side front room has a covered over tile fireplace and mantel, while the back room features a built-in wall cabinet with glass-paneled doors.

One-year program
"This is a one-year program to help them get on their feet," explained Newman, who was homeless herself in the late 1980s in New York when she began transitioning. "After that, new people will move in and hopefully after a year they will be ready to fly and go live on their own."

The pilot program will not only cover the residents' housing costs but also supply the residents with food each week, provide passes for local transit systems, and set them up with savings accounts. Fifteen people have already applied for the program, and those who are not accepted will be placed on a waiting list and encouraged to apply for rental subsidies through the Our Trans Home program.

Those moving into the Washington Street apartments will be expected to be actively looking for employment, working, or attending school. The on-site support staff will assist them in those goals as well as finding their own housing next winter when their 12 months are up.

"They will have to be doing something. They can't just be staying at home here," stressed Newman. "This is for people who need a place to stay as they get on their feet. That is who we are trying to help."